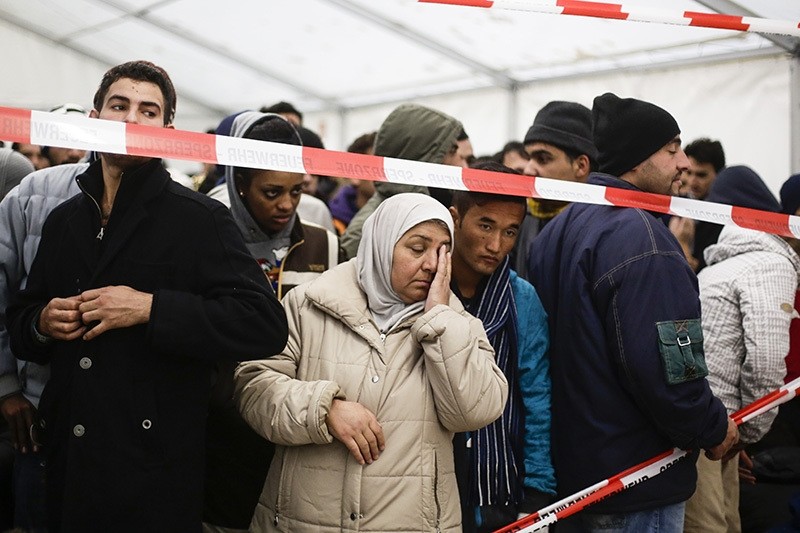 In this file photo taken on Oct. 15, 2015, refugees wait in exclusion zone for transport to a registration office at the State Office of Health and Welfare in Berlin (AP)
by Associated Press
Jun 01, 2016 12:00 am

Nine months ago, after the Syrian army razed his neighborhood, Mohammed was desperate to make his way to Germany.

Now he is desperate to go back to Syria because his wife and eight children can't get out. But he fears the only way he can return is the same way he came — illegally.

Mohammed, a farm worker from the outskirts of Damascus, is one of at least hundreds of Syrian refugees who want to go home, often because it's taking too long to bring their families here. But in an unlikely twist, they are finding themselves stuck in Europe.

While Afghan and Iraqi asylum seekers get financial support and organized plane trips to go home, the German government and the International Organization for Migration say they can't send Syrians back to a war zone. There aren't even flights from Germany to Syria because of the brutal civil war there. And neighboring countries that initially took in the bulk of the Syrian refugees have all but closed their doors; Turkey has introduced tough visa requirements, and Lebanon is refusing to take Syrians who left illegally through Turkey.

That leaves little hope for the dozens of Syrians per week who have requested departures since the beginning of this year, according to travel agents and case workers at migrants' return programs.

"I came here only for the future of my children," said Mohammed, who did not want to give his last name because he is afraid the Syrian regime will harm his family. "If they're not here, it makes no sense for me to be here."

A stocky man with tired eyes who looks much older than his 45 years, Mohammed first came to Germany because his children could barely survive on the boiled grass their mother cooked for them. So he paid smugglers to take him across the Mediterranean on a shaky dinghy and trekked up the Balkans, in the hope of quickly finding a job and then bringing his family in.

He got asylum in March. But his wife calls him every day, crying and begging him to come back home. She doesn't have any money to feed their seven daughters, and their only son, 12-year-old Marwan, quit school to sell vegetables on the market.

He bought a plane ticket to Beirut in April, but German security didn't let him on the plane. Two weeks ago, Mohammed tried to board to Athens, but was again stopped. He pulled two crumpled online tickets slowly from the pocket of his oversized brown coat, a worthless reminder of his futile efforts. Covering his face with his hands, he said he will try until he finally finds a way out.

While nobody has exact figures, interviews with government officials, case workers, travel agents and dozens of refugees themselves show that the number of Syrians leaving Germany is growing steadily.

Alaa Hadroos, who runs the Golf Reisen travel agency in Berlin, said between five and 10 people come by his office every day asking him for ways out of Germany. At the beginning of the year, it was more like 20 daily, but now some have realized he can't help them.

"We are getting here a lot of Syrian refugees who want to go home, but it is very, very hard for them to actually get there in any way," he said.

Hadroos said most Syrians now try to book flights from Germany to Athens, then hire traffickers to walk them across the Greek-Turkish border illegally to eventually make it back home.

"It's not a legal route, therefore we cannot offer this as a travel agency," Hadroos added. "We can only book flights for those who have valid travel documents to Athens. But we don't want to have anything to do with the route from Athens to Syria."

Several migrants confirmed to The Associated Press (AP) that they planned to use this route. They told the AP they had bought or were going to buy plane tickets to Athens from traffickers in Berlin, even though they had no valid travel documents because German authorities hadn't yet returned their passports. While Berlin and Athens are part of Europe's passport-free Schengen zone, the airlines still need to see valid travel documents.

More than 420,000 Syrian refugees came to Germany last year, and the majority will eventually receive asylum. But the country is so overwhelmed that it is taking months, if not years, to process the requests, let alone the hundreds of thousands of applications for family reunions.

"We know how important it is for these people, who have only one wish — to be reunited with their families as quickly as possible," a spokesman for the German Foreign Office said earlier this month.

The spokesman, Martin Schaefer, said the government has increased the staff at its embassies in the Middle East to speed up the visa process for Syrian family members. The capacity of the German embassy in the Lebanese capital of Beirut to issue visas has gone up from 5,000 a year in 2012 to 30,000. But because of war, Germany no longer has an embassy in Damascus, which makes it difficult for many Syrian families to even apply for visas in the first place.

Many Syrians say the long separation from their children and wives is unbearable. Others can't cope with life in cramped shelters, where they cannot work during the asylum procedure. And yet others say they are simply too homesick.

"They are more or less trapped in Germany," said Silvia Kostner, the spokeswoman for Berlin's Lageso office, which organizes voluntary returns for migrants. "Of course, they can try to get out through different ways — and some are doing exactly this because they're missing their families so badly — but we can't take on the responsibility to help these people travel back to a war zone."

Syrian refugee Abdullah Hamwi, a textile merchant who sold caftans at the old market in the city of Aleppo before it was destroyed, said he initially settled in Istanbul. But he moved to Germany in 2014 with his wife and baby son, hoping for a good education and better future.

After half a year in a shelter with 400 other migrants, no asylum, no work and the same three pieces of bread, butter and jam for breakfast every morning, they say they've had enough. They complain that they stand in line for days to pick up pocket money.

"Until now I didn't see anything good here," said Hamwi's wife, Dania Rasheed, embracing her big pregnant belly with her hands. "Everything is difficult, they want papers here, papers there; tell us to go here and go there — the treatment is bad, it's not the life we used to live in Syria."

The young couple went for days without heat in the middle of the winter. They get by on 330 Euros ($368) per month and said security staff enter their little room day and night. Hamwi, a pale, skinny man with dark circles under his eyes, takes his wife to the bathroom every time because he fears the strangers around.

Such grievances are not likely to be resolved quickly in any big German city where thousands — both citizens and migrants —are suffering from an acute housing shortage. Hamwi has already checked out the current smuggler's rate to get back to Istanbul: 300 euros per person for Berlin to Athens and another 1,500 to get them all into Turkey.

"As soon as our daughter is born, we will find a way to get out of here and back to Istanbul," Hamwi said. "At least there we can live in dignity and work — here we are not getting any respect."

Spiro Hadad, a journalist and a photographer, is one of those who have successfully made it home to Syria. After losing his house, he left Syria in June last year and went to Austria. He stayed there for six months and spent 4,500 euros. But he soon became frustrated, among other things, that could not bring his mother in, so he asked the human rights office in Austria to allow him back home.

"They tried to convince me to stay, but I refused," he said.

They eventually gave him a ticket to Istanbul and Lebanon. Lebanon let him in even though he had originally left illegally through Turkey, because he showed officials his press card. Then he drove home to Damascus.

"I lost everything in Syria and I tried to improve my conditions. Unfortunately, I lost much more," he said. "Most people prefer to return because they can't stand it."