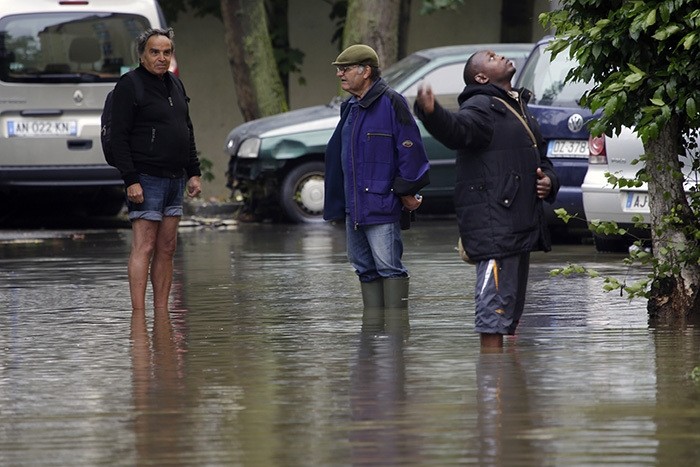 Eight people have perished in Germany and six days of torrential rain in France have caused the Seine and other rivers to burst their banks, forcing the evacuation of thousands of people in riverside towns south of Paris and in the Loire Valley.

The body of an 86-year-old woman was found in her flooded house in Souppes-sur-Loing in central France, where some towns have been hit by the worst flooding in more than 100 years.

In the small town of Montargis, the water had risen so high that only the tops of cars could still be seen peeking above the surface along the high street.

Rescue workers have responded to around 10,000 calls and evacuated more than 5,000 people since the deluge began on the weekend.

"The situation remains tense and difficult in several areas. We still have many concerns," Prime Minister Manuel Valls said as he visited a crisis control centre in the flooded town of Nemours, south of Paris.

Rescue workers found the bodies of three people in a house in Simbach am Inn on Wednesday and police warned that several other people were missing.

The force of the water upended cars and washed away parts of the streets, with a thick layer of mud left throughout the town by the subsiding water. Huge piles of wood and rubbish deposited by the torrent were visible next to badly damaged homes and offices.

A woman's body was also discovered lodged on a tree trunk in the neighboring town of Julbach, police said.

On Bavaria's southeastern border with Austria, some residents scrambled onto rooftops to escape the waters on Tuesday.

"The floods came so quickly that people had to escape to the roofs of their houses," a spokesman for the Lower Bavaria police said.

The deaths raised the toll in Germany to eight after four people were killed earlier this week in the southern Baden-Wuerttemberg region.

The outbreak of severe weather began on the weekend with lightning strikes which left children in Paris and western Germany fighting for their lives.

In France, forecaster Meteo France described the situation as "exceptional, worse than the floods of 1910," when even central Paris was flooded.

In central Paris, the swollen Seine had flooded paths normally used by tourists and was washing around a replica of the Statue of Liberty.

Authorities were particularly concerned about the rising waters in Longjumeau, 25 kilometres (16 miles) south of Paris.

Around 200 people spent the night in a gymnasium after being evacuated and Valls said at least 2,000 more people need to be moved from their homes in the town.

Further south, residents of Nemours were evacuated after the Loing river burst its banks and submerged the high street.

Rescuers had to use dinghies to reach stranded residents in streets turned into rivers.

"In 60 years of living here I have never seen this," Sylvette Gounaud, a shopworker in the town said. "The centre of town is totally under water, all the shops are destroyed."

In the Loire Valley, a lake of floodwater gathered in front of the Chateau of Chambord, causing a watery reflection of the much-visited 16th century castle.

The Loiret region where the chateau is located has seen the average rainfall of six weeks in just three days.

The French Open tennis got back on track Wednesday after rain washed out play in Paris earlier in the week, but players hoping to reach the finals face a heavy schedule of matches.

World number one Serena Williams brushed off the prospect of playing four matches in four days.

"It's totally fine I think for me and for everyone," the American said.

In Austria, where schools and roads have been flooded in recent days, the floodwaters receded.