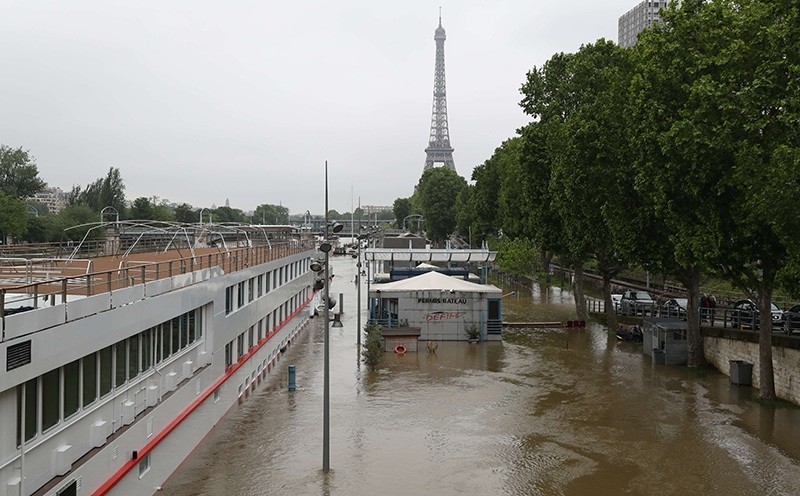 Floods in Germany and France have killed at least 10 people and forced thousands from their homes, officials said Thursday as Louvre museum in Paris announced its staff will move the most vulnerable treasures to higher floors out of the reach of the swollen Seine River.

The world's most visited museum said it would shut its doors yesterday to evacuate artworks from basement storage as the nearby river began overflowing its banks after days of torrential rainfall.

Several towns in southern Germany have been devastated by flooding, and rescue workers in central France have been seen rowing lifeboats down local streets that look like muddy rivers. Forecasters in both countries warned of more downpours over the next 24 hours.

In France, a man on horseback died after he was swept away by floodwaters in Evry-Gregy-sur-Yerre just southeast of Paris, the local prefecture said. The 74-year-old's body was recovered from the water by firefighters. The horse made its own way back to safety, police said. There were also chaotic scenes in the German town of Simbach am Inn, where fast moving floodwaters swept away the entire wood stock in a sawmill, scattering huge stacks of splintered wood in the area and blocking roadways.

Five people have been killed in the Simbach area including three women from the same family – a mother, grandmother and daughter – who were trapped in their house. Two elderly people were also found dead in their homes. "The [rising] water came so quickly that practically no residents had time to run," police spokesman Armin Angloher said.

The recent fatalities bring the death toll in Germany to nine, including four victims who were killed earlier this week in the southern region of Baden-Wuerttemberg. Three others are missing, according to a police spokesman in Bavaria state.

German Chancellor Angela Merkel said her thoughts are with the families "who have been plunged into this devastation."

Some towns in central France have been hit by the worst floods in over a century, with more than 5,000 people having been evacuated since last weekend and roughly 19,000 homes left without power.

In Paris, officials were erecting emergency flood barriers along the Seine River, whose riverbanks are home to both the Louvre and Orsay museums. The Orsay museum, a formerly converted railway station, is home to the world's greatest collection of Impressionist paintings. It closed early Thursday with staff members expected to move its most vulnerable pieces to the upper floors in the event that the Seine River rises more than 5.5 meters.

"It's amazing. I have been here many times and this is the first time I have seen the river so high," said Brian Alan, an American tourist from Atlanta, Georgia, who was watching the scene from the Alexander III Bridge.

Rescuers in the Parisian suburb of Longjumeau were paddling up streets in lifeboats and in the town of Montargis, only the tops of cars could be seen peeking above the floodwaters.

About 200 people had to spend the night in a gymnasium in Nemours, south of Paris, and Prime Minister Manuel Valls visited the flooded town's crisis control center, stating that at least 2,000 more people still need to be evacuated. "The situation remains tense and difficult," he said.

French President François Hollande said a state of "natural catastrophe" would be declared when the cabinet meets next Wednesday.

France was already hit by ongoing strikes and violent protests over the controversial proposed labor reforms, which would give employers greater freedom to cut pay and lay off workers. The floods add more pressure to a country which struggles with disrupted transportation due to the strikes ahead of Euro 2016 football tournament.