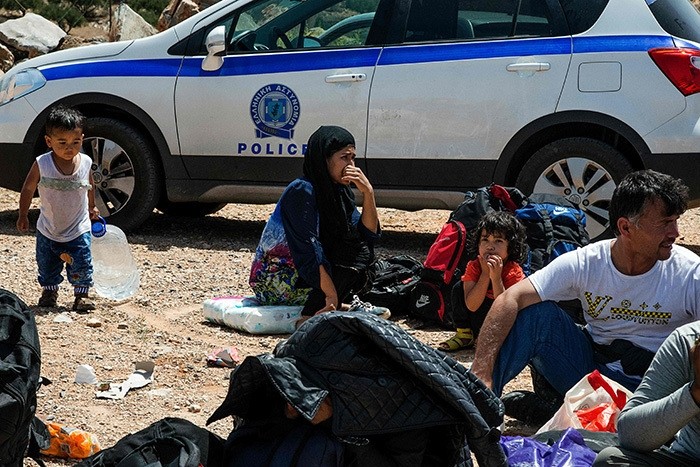 Refugees and migrants sit on the ground by a Greek police car upon their arrival with a boat near the village of Finokalia in the southern Greek island of Crete on May 31, 2016. (AFP Photo)
by Daily Sabah with Wires Jun 03, 2016 12:00 am

Four migrants have died and hundreds have been rescued from a capsized boat off the Greek island of Crete, while the Libyan navy announced hours later that more than 100 bodies were retrieved from the Mediterranean

At least four people died and a desperate effort was underway yesterday to find hundreds more believed missing after a migrant boat capsized off the Greek island of Crete, the Greek coast guard said.

A Greek coast guard spokesman said at least 340 people had been rescued, and the International Organization for Migration (IOM) said the vessel "is believed to have left Africa with at least 700 migrants on board." It was the second migrant vessel found in that area of the southern Aegean Sea since last week. A Greek coast guard spokeswoman told Agence France-Presse (AFP) that a major rescue operation was underway, including four ships that were passing through the area, in clear but windy conditions about 75 nautical miles south of Crete. "The number of people in distress could be counted in the hundreds," she said. It was not immediately clear where exactly the boat had left from or where it was headed, or the nationalities of those on board. The Greek coast guard spokeswoman said a passing ship spotted the sinking vessel off Crete. The coastguard rushed two patrol boats, a plane and a helicopter to the scene. About half of the 25-meter-long boat was completely underwater, the spokeswoman said.

More than 2,500 people have died trying to make the perilous journey this year – the vast majority of them on crossings between Libya and Italy – as Europe battles its worst migration crisis since World War II. The most recent deadly incident in the Aegean dates back to early April when four women and a child drowned off the island of Samos. The number of people using that route has reduced after the EU-Turkey deal, under which migrants landing on the islands can be sent back to Turkey. On May 27, the Greek coast guard intercepted a boat off Crete carrying 65 Syrian, Afghan and Pakistani migrants, under the control of two suspected human traffickers – a Ukrainian and an Egyptian. The Greek coast guard did not indicate if that boat was heading for Italy or whether the smugglers had chosen the route through the southern Aegean to reach Greece by avoiding NATO ships deployed further north and east. The NATO deployment is aimed at cutting off the Aegean route previously used by hundreds of thousands of migrants fleeing poverty and conflict in Asia, the Middle East and Africa.

Meanwhile, Libyan navy spokesman Col. Ayoub Gassim said yesterday that more than 100 bodies of migrants have been retrieved from the Mediterranean Sea after a smuggling boat capsized off Libya's shores. Gassim told The Associated Press that at least 104 bodies have been pulled out of the waters near the western city of Zwara but that the expected death toll is likely to be higher, since such boats usually carry up to 125 people. He said the Libyan coast guard found the empty boat on Thursday and that it is possible the boat capsized a day earlier on Wednesday.

Speaking via telephone, he blamed Europe for "doing nothing but counting bodies" to stop the massive illegal migration from Libya. The discovery of the bodies off Zwara is the latest in a string of tragedies that have already claimed more than 1,000 lives the last 10 days as desperate migrants embark on treacherous sea journeys seeking a better life in Europe. Earlier this week, the IOM estimated that at least 1,000 migrants died in shipwrecks and from boats capsizing in the central Mediterranean Sea the previous week.

Flavio Di Giacomo, an IOM spokesman in Rome, told dpa news agency that migrant flows to Italy had surged because smugglers in Libya used larger wooden boats, capable of transporting up to 700 people, as well as rubber dinghies good for only 100. "This has had a multiplier effect on departures, and on deaths," he said.

In Geneva, Spindler said Libyan traffickers were trying to reap as much profit as possible before the Islamic fasting month of Ramadan starts in early June.

Europe faces the biggest refugee crisis since World War II, with millions of people trying to reach Europe. The majority of these migrants come from the Middle East and Africa. The turmoil in the Middle East and the civil war in Syria, which has been ongoing since 2011, have led many people to flee the conflict in an attempt to seek security and shelter in a more prosperous and peaceful country, such as one in Europe. Europe has been heavily criticized, however, for lacking a collaborative response to the crisis.