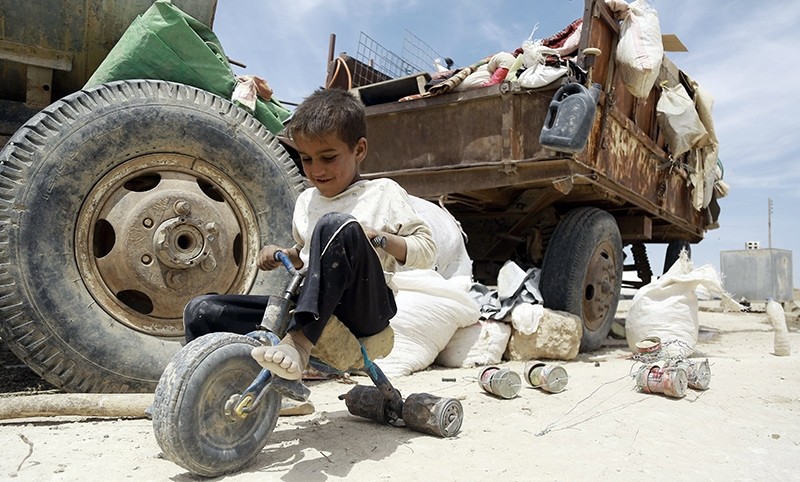 An Iraqi child who fled with his family the northern province of Nineveh following the advance of Daesh, plays with a makeshift tricycle in a refugee camp in al-Hawl (AFP Photo)
by Jun 03, 2016 12:00 am
British singer-songwriter Yusuf Islam, formerly known as Cat Stevens, launched a campaign on Friday to highlight the fate of child refugees in Europe with the release of a new single and plans for a one-off charity concert.

The single, He Was Alone, was released with a video that follows a boy who loses his family before dying on the road with his gravestone bearing just one word, walad, meaning boy in Arabic.

Save the Children said it was estimated that 95,000 refugee and migrant children travelled to Europe on their own last year, or lost their families on the journey.

Yusuf, 67, best known for his 1960s and 1970s hits such as "Moonshadow" and "Wild World", said he had become involved after visiting a refugee camp in southern Turkey near Syria.

"It was difficult to stand by just watching this tragedy without trying to do something," Yusuf said in a statement.

"My hope is to open people's hearts to the sadness experienced by thousands of young souls whose voices are not heard ... in the midst of the refugee crisis, generated by the wars and conflicts blazing through their homelands."

Yusuf, who converted to Islam in 1977 after almost drowning and largely quit the music industry for nearly 30 years, said the single and London concert on June 14 were part of a broader campaign #YouAreNotAlone.

He said his charity Small Kindness, that he founded in 2000 to provide humanitarian aid worldwide, was working with the charities Save the Children and Penny Appeal to raise funds for child refugees.

"I simply decided to help humanise the narrative and lend my voice to the call for keeping hearts and doors open to every refugee, especially youngsters, who have lost what future they might have once hoped for," said Yusuf who now lives in Dubai.