Poland to increase number of soldiers by 50,000, establish paramilitary force amid Russia concerns 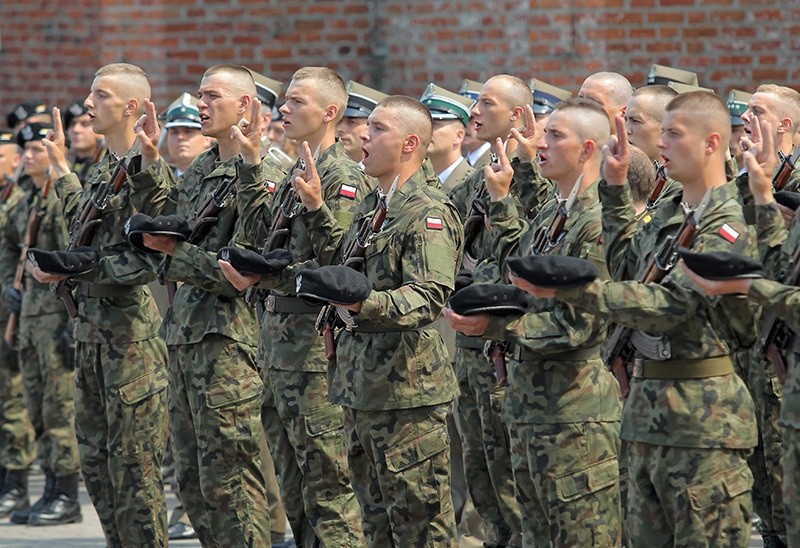 Soldiers during an oath ceremony of 100 cadets of the preparatory service for the National Reserve Forces in Braniewo, north-east Poland, 03 June 2016. (EPA Photo)
by Compiled from Wire Services Jun 04, 2016 12:00 am

Poland will expand its armed forces next year to 150,000 men from the current 100,000 because of security concerns, Defense Minister Antoni Macierewicz said Friday.

He did not explicitly mention Russia's 2014 annexation of Crimea from Ukraine or the pro-Moscow revolt in the country's east, but those events have already spooked Warsaw into bolstering its defense capabilities.

The NATO member and allies in the region have managed to obtain an alliance revamp putting more troops into eastern European member states. At an upcoming summit in Warsaw on July 8-9, NATO is expected to decide on the deployment of battalions to Poland and the Baltic states, a move that would likely further antagonize Russia, which has previously said that the alliance's eastward expansion threatens its national security.

"We've decided to increase the number of Polish troops. We estimate that next year the army will number around 150,000 men," Macierewicz told reporters.

He added that an important part of the new total would be the 35,000-member paramilitary force, whose first volunteers Poland will start enrolling in September.

The voluntary members will receive a monthly payment of 500 zloty (127 dollars), Grzegorz Kwasniak, a Foreign Ministry official responsible for paramilitary groups, said at a defence trade fair in Ostroda, Poland.

The force's command structure and senior appointments were decided in April, Macierewicz had said on Thursday at a conference of paramilitary organizations in Poland.

Comprising civilians who have had military training, the force is intended to deter Russia from seizing Polish territory by infiltration, as it is perceived to have done in eastern Ukraine.

Each of Poland's 16 provinces are expected to have a brigade-level force, and Mazovia, the biggest and most populous region in the center of the country, will have two.

Priority in deployment will be given to eastern provinces of Podlachia, Lublin and Podkarpackie, deemed to be the most exposed to Russian pressure.

Relations between NATO and Moscow have reached their worst point since the Cold War over Russia's annexation of the Crimean peninsula and its support for separatists in eastern Ukraine. Both sides have been flexing their military muscles in eastern Europe ever since.