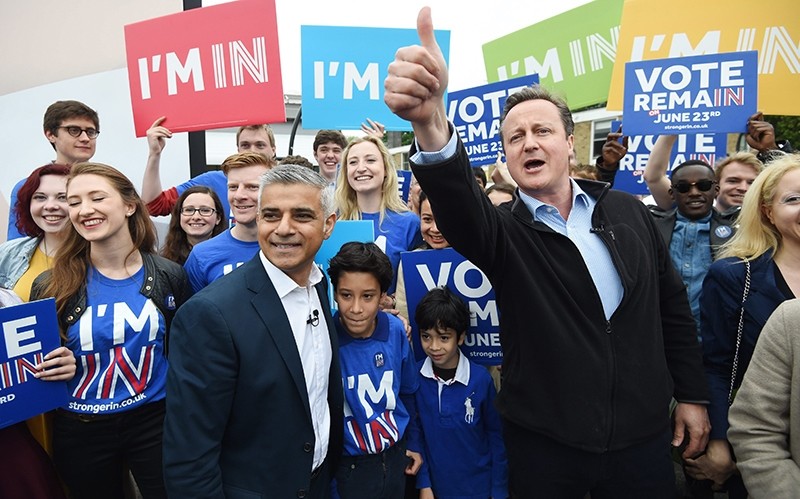 British Prime Minister David Cameron (R) and Mayor of London Sadiq Khan (L) greet supporters during the launch of the battle bus for the 'Remain In' campaign (EPA Photo)
by Jun 04, 2016 12:00 am
The campaign to stop Britain voting to leave the European Union in a June 23 referendum has seen its lead shrink over the past two weeks, an online poll published by market research company Opinium showed on Saturday.

The poll conducted between May 31 and June 3 showed 43 percent of people planned to vote to stay in the EU while 41 percent wanted to leave, a narrower lead than the 44-40 split in Opinium's last poll for The Observer newspaper on May 21.

Other polls in the past week also showed gains for "Leave", and sterling fell sharply on Tuesday when both an online and a telephone poll for ICM showed a 3 percentage point lead for the "Leave" campaign.

Opinium said the swing to "Leave" would have been larger if it had not re-weighted its latest poll to reduce the impact of a disproportionate number of socially conservative voters in its sample, something which it had not done previously.

"A fuller explanation of these changes and the effect they have will be posted on Monday," it said on its website.

The polling company also said that when it asked undecided voters which direction they leant, this time there was a 36 percent to 33 percent split in favour of "Remain", while two weeks ago it was 47/32.