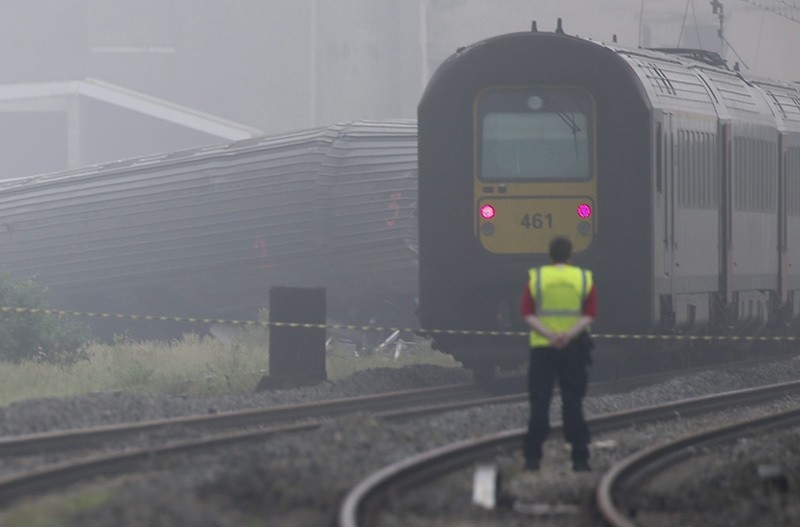 "The passenger train is really in a lamentable state," Francis Dejon, mayor of the commune of Saint-Georges-sur-Meuse, told a news conference. "We've very lucky there weren't more victims."

Twenty-seven other passengers were treated as a result of the accident, which authorities said took place around 11 p.m. Sunday.

RTL broadcasting said the passenger train was carrying about 40 people when at a speed of 55 mph (90 kph) it slammed into the freight train at Hermalle-sous-Huy on the banks of the Meuse river near Liege.

Two cars from the passenger train derailed and tumbled onto their side.

The first car, Dejon said, was so badly damaged "it was curled back on itself."

It took rescuers up to three hours to free people from the wreckage.

Some of the nine injured people hospitalized were in critical condition and the death toll could rise, the mayor said. He said prosecutors were at the scene and were investigating the cause of the accident.

"The SNCB will participate closely in the investigation," Belgium's national railway operator said in a statement. Its services have been seriously affected by a recent wave of strikes, especially in French-speaking parts of the country.

The train wreck halted rail service between Namur and Liege, two of Belgium's largest cities. Nathalie Pierard, an SNCB spokeswoman, said it could take several days to clear the tracks.

The passenger train was traveling between Mouscron and Liers. Those injured were taken for treatment to Huy and Liege, and psychological counseling was arranged for those who wanted it.

Family members arriving at the accident scene to search for loved ones were being offered accommodations in a nearby abbey.