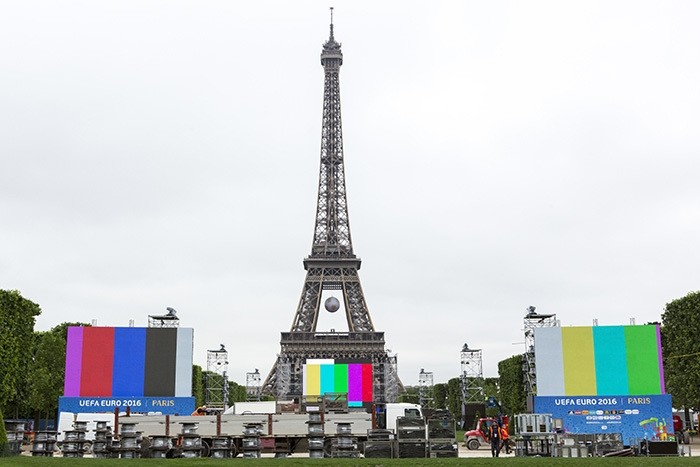 Ukrainian officials said that a man detained on Saturday was planning attacks on Jewish and Muslim worship places during the Euro 2016. The U.S. previously warned its citizens of possible attacks in Europe, saying they could include the championship

Ukraine's state security service said yesterday a French citizen detained in late May on the Ukrainian-Polish border had been planning attacks in France to coincide with the Euro 2016 football championship it is hosting.

On Saturday, the Ukrainian border guard service reported the unnamed 25 year old had been arrested with an arsenal of weapons and explosives, including rocket launchers and Kalashnikov assault rifles, in his vehicle.

Security Service of Ukraine (SBU) Chief Vasily Gritsak said the man had made contact with armed groups in Ukraine with the aim of buying weapons and explosives.

"The Frenchman spoke negatively about his government's actions, mass immigration, the spread of Islam and globalization and also talked about plans to carry out several terrorist attacks," Gritsak told journalists.

"The SBU was able to prevent a series of 15 acts of terrorism [planned] for the eve and during the Euro football championship," he said.

Last month, Germany's Federal Criminal Police Office (BKA) also said the Euro 2016 could be target of terrorist attacks in a report leaked to the Bild newspaper.

The opening match between France and Romania will be held on June 10 and the UEFA championship final at the Stade de France just north of Paris could be targeted by extremists, according to the BKA report.

While Belgium also said in early May that it has a large amount of intelligence indicating that there are more militants who want to return to Europe from Syria to conduct further attacks, security concerns seem to have particularly risen as Euro 2016 will be held in Paris – a city that has seen a number of terrorist attacks and where an extensive state of emergency still continues.

Security officials in Europe have been on high alert since the November attacks in Paris that killed 130 people, and French and football officials alike have sought to quell concerns that the championship could be marred by violence. France's parliament voted to extend the state of emergency to the end of July to cover the Euro 2016 and Tour de France. The measure boosting security powers was already extended by three months in February until May 26. Because of fear of a heightened threat of terrorism and after several extremists said they originally wanted to attack the tournament, more security concerns surround the hotly anticipated Euro 2016 tournament.

While struggling with security threats, France has been also hit by nationwide protests and strikes over a bitterly disputed labor law reform. Tourism agencies in the country warned that the number of tourists visiting Paris is decreasing ahead of the Euro 2016 due to the protests and strikes, which are disrupting transportation.

Three months of student- and union-led protests have descended into violent clashes between demonstrators and police. Unions are tapping months of public anger over a labor bill that would make it easier for employers to fire workers and lengthen the working week. Many videos showing police and security forces apparently using disproportionate force on protesters have attracted viewers and controversy, including a police officer aggressively shoving a woman and throwing her to the ground.