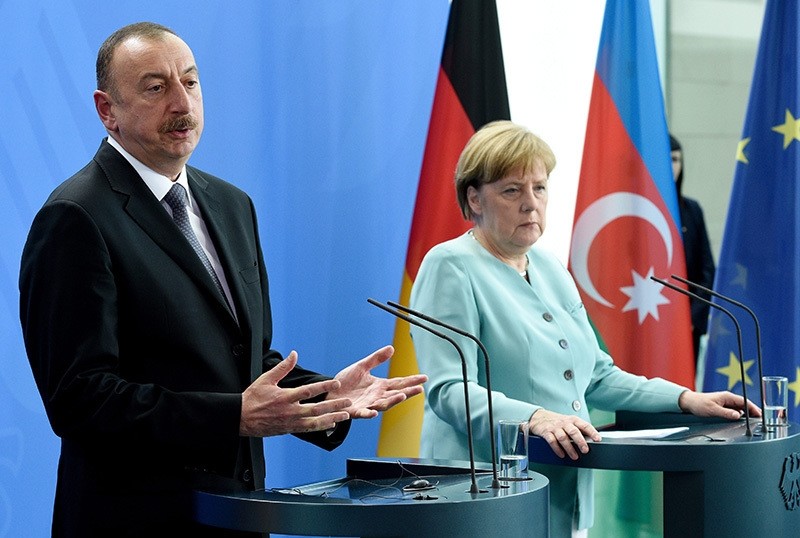 German Chancellor Angela Merkel and the President of Azerbaijan, Ilham Aliyev, during a press conference in Berlin, Germany, June 07, 2016. (EPA Photo)
by Compiled from Wire Services Jun 07, 2016 12:00 am

Germany's Angela Merkel on Tuesday called for the deaths of Armenian and Turkish Ottomans in 1915 to be investigated by a commission of historians, despite the German federal parliament's vote last Thursday describing the issue as genocide, ignoring Turkey's years-long calls for leaving the issue to historians.

The chancellor said Germany should also contribute to the commission. "The history between Turkey and Armenia should be handled by a commission of historians to which we should contribute," she said at a news conference with Azerbaijani President Ilham Aliyev in Berlin. "I will continue to talk to both Turkish side and Armenian side on this issue."

Merkel was also critical of Turkish reaction against German deputies took part in the decision. "The lawmakers in the Bundestag are freely elected without exception and the accusations and the statements that have been made from the Turkish side are incomprehensible," she said.

Germany was a wartime ally of the Ottoman Empire and also has its own experience of historical examination into mass deaths following World War II.

Referring to the latter, Merkel said Germany would continue to deal with the legacy of the Holocaust, in which six million Jews were murdered under the Nazi regime.

Merkel's comments on the Armenian issue came after last week's symbolic Bundestag vote that saw lawmakers declare the deaths of Armenians in eastern Anatolia in 1915 as genocide.

Turkey has repeatedly called for the establishment of an international commission of historians to resolve the dispute over the events of 1915. While it accepts many died on both sides following an uprising within the Ottoman Armenian population as Russian forces invaded, Ankara does not view the casualties as genocide.

Turning to a more recent dispute between Turkey and Armenia, Merkel said Germany would use its current chairmanship of the Organization for Security and Cooperation in Europe (OSCE) to resolve the issue of occupied Karabakh.

The enclave was taken over by Armenian secessionists as the Soviet Union broke up in the late 1980s and is recognized as Azerbaijani territory by the international community, including Turkey, a close ally of Azerbaijan. Despite a 1994 peace deal, border skirmishes are a frequent occurrence. At least 120 people are believed to have been killed during the recent surge in violence, in which both sides have traded blame for the fighting.

Aliyev said he hoped the issue would be solved according to UN resolutions recognizing Azerbaijan's territorial integrity.

He accused Armenia of provoking Azerbaijan, demolishing the mosques and graves and attacking civilians. "Armenia occupied Azerbaijan's territory… at the beginning of 1991," Aliyev said. "Karabakh is a historical part of Azerbaijan."

Merkel said that Germany shared Azerbaijan's view. "The solution of the Karabakh issue will also contribute to mending ties between Turkey and Armenia," she said.

Tuesday was the second day of Aliyev's trip to Berlin to boost economic and diplomatic ties. He met Munich Security Conference head Wolfgang Ischinger, officials at aircraft maker Airbus and members of the German-Azerbaijani Business Forum.