England supporters clash with locals in Marseille at Euro 2016 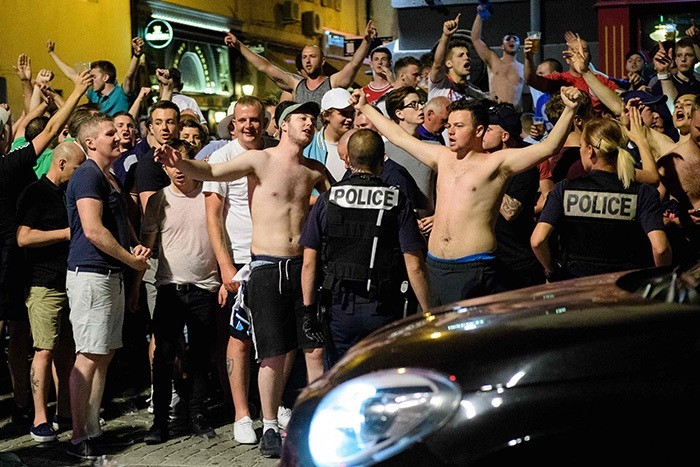 As cleaners hosed down sidewalks and swept up broken glass early Friday, the manager of an Irish bar near where soccer supporters from England fought overnight with locals in Marseille's historic center said youths from the city's gritty suburbs provoked the clashes.

The brief clashes late Thursday revived bitter memories of days of bloody fighting in this Mediterranean port city between England hooligans, Tunisia fans and locals of North African origin during the World Cup in 1998, and raised fears of more violence ahead of Saturday's European Championship match between England and Russia at the Stade Velodrome.

Now, law enforcement authorities are bracing for two days during which tens of thousands of England and Russia fans are expected to descend on the city for the match.

"UEFA regrets the skirmishes that occurred in Marseille yesterday," the governing body of European soccer said Friday in a statement. "We are confident that the safety of travelling fans will be ensured by the local authorities which are responsible for order in the city. We make an appeal to all fans to behave respectfully throughout the tournament."

Following deadly attacks in Paris by Islamic extremists and fears Euro 2016 is also a target, security already is at an unprecedented high for the month-long tournament that kicks off Friday in Paris when host France takes on Romania.

Anthony Heraud, the 34-year-old manager of Irish pub O'Malley's, told The Associated Press that local youths started the trouble in the Old Port.

"There were some small exchanges but nothing too nasty," Heraud said. "Englishmen are cool. They were just partying, singing a lot. But no problem."

An Associated Press reporter saw fans throwing bottles and plastic chairs at one another. Riot police with shields separated the two groups and fired tear gas to disperse them.

Heraud said he hoped that beefed-up security would rein in potential violence in the coming 48 hours and prevent a repeat of the ugly scenes of the 1998 World Cup.

Then, hundreds of England fans were involved in violent beach-front clashes with locals in Marseille over two days around England's match against Tunisia match, prompting a headline in a local paper: "Go home hooligans!"

One fan had his throat slashed, cafe windows were smashed, and bottles, glasses and chairs were thrown. The scenes further marred the reputation of England's soccer fans following the dark days of hooliganism in the 1970s and '80s.

English soccer fans have been largely praised for their behavior during recent tournaments.

Peter McKinley-Smith, a 52-year-old England supporter from Chesterfield, said Friday that it was only a tiny minority of hooligans among the thousands of true fans.

"It is a really, really small element who are here for that," he said of the violence as he strolled around the Old Port looking for a French cafe that would serve an English breakfast. "Everybody else is here to enjoy the football and the French atmosphere."