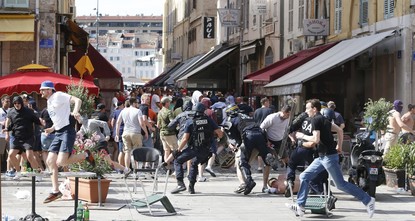 Police say 35 people have been wounded in clashes that erupted between England and Russia soccer fans before and after a match at the European Championship.

Regional police chief Laurent Nunez said in a text message that most of the injuries were minor. He did not immediately reply to a question about a British victim who was reported to be in serious condition.

French authorities have been on the defensive after media broadcast live scenes of brutal fighting at the Old Port in Marseille and surrounding side streets ahead of Saturday's game.