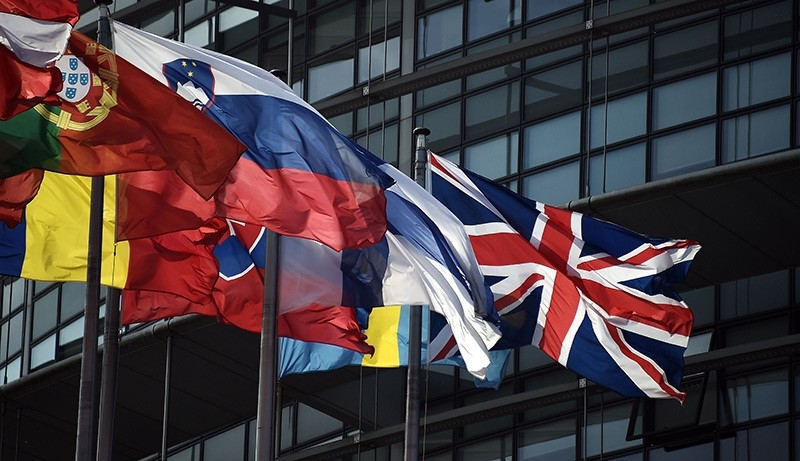 The British Union Jack flag (R) flies amongst European Union member countries' national flags in front of the European Parliament on June 9, 2016 in Strasbourg, eastern France. (AFP Photo)
by Jun 12, 2016 12:00 am
If the British vote to leave the European Union on June 23, it could lead other countries to consider departing the bloc, the German Institute for Economic Research (DIW) warned Sunday.

"Britain could be the first domino," DIW head Marcel Fratzscher told dpa. Similar votes in Italy or France would result in much greater and more dangerous uncertainty than a so-called Brexit, he said.

A Brexit would result in higher interest rates, which would put the brakes on investments. "That would also bring turbulence to the financial markets, which would become extremely volatile," he said.

The pound, and probably also the euro, would lose value, resulting in economic uncertainty, he said.

"Then we would have yet another mechanism which would ultimately lead Europe and also Germany into another recession, just like the global financial crisis in 2008 and 2009," Fratzscher said.

"We would therefore also pay a great price [for a Brexit] in Germany," he said.

The economic researcher said that Britain should not think that it will gain economic advantages from a Brexit.

"Less capital would flow to Britain, companies would rather turn their sights elsewhere. Investments, innovations, productivity would all drop and with them over the long-term also jobs. Growth and prosperity would be smaller," Fratzscher said.

Fratzscher pointed to studies that showed the British economy could shrink by 3-4 per cent over the next 15 years if it leaves the EU. "That is a lot, for each national that would be a loss in wealth of 700 to 800 euros (788-900 dollars)," he said.

"My greatest concern is ultimately for the sustainability of the euro," Fratzscher said, with reference to the domino effect. "Other countries could ask: Do we really want to stay in the EU? Look, the British are leaving. They are even getting a really good deal. We also want to do that."

If Italy or France held an in-out referendum on the EU, it would also be a referendum on the euro, Fratzscher said. Further uncertainty would ensue, he said. "The economic costs of an exit from the EU of one country would be enormous for all of Europe."

The DIW chief stressed the need for reforms in the EU, including the completion of the banking union, a fiscal union with one European finance minister and greater democracy, such as a direct vote for the European Commission and a strengthening of the European Parliament.
Last Update: Jun 12, 2016 4:19 pm
RELATED TOPICS