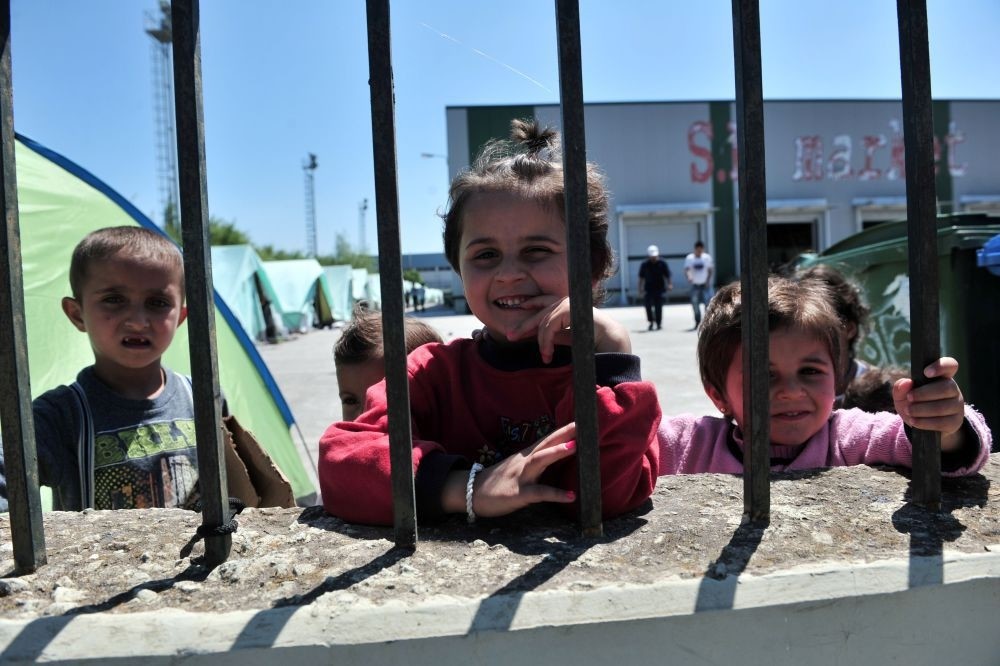 Children inside a new refugee camp in an abandoned factory in Sindos, a west suburb of Thessaloniki, May 27.
by Daily Sabah with Reuters Jun 13, 2016 12:00 am

As desperate migrants fleeing war continue to travel to Europe, thousands of migrant children have gone missing across Europe, and with lack of EU coordination, many families are searching for their children alone

Families who have fled war and poverty in the Middle East, Africa and Asia, are searching for their children who missed on their way to Europe. Without help, they are left to conduct their desperate investigations alone.

In January, the EU's criminal intelligence agency Europol said at least 10,000 unaccompanied child refugees had vanished after arriving in Europe, at risk of falling prey to trafficking gangs.

Many missing or unaccompanied children are thought to be in Greece, the EU country that has become the staging post for attempts by refugees and migrants hoping to reach wealthier northern Europe.

With many camps and detention facilities in Greece full, Karen Shalev-Greene, director of the Centre for the Study of Missing Persons at the University of Portsmouth, believes that hundreds of children are living in squats or on the street – making them vulnerable to exploitation. In Exarcheia, an Athens neighborhood plastered with anarchist posters, an old school building is being used as a squat. Toddlers weave around bags of rice donated by a Chinese charity in a building now home to over 300 migrant families.

According to the European Commission, missing unaccompanied children are the responsibility of individual EU member states. But a February report by Missing Children Europe – an umbrella group of some 30 child protection groups – highlighted a "clear lack of ownership" in cases involving missing, unaccompanied children who often slip through the cracks. "As an example, children from refugee backgrounds tend to aim for Germany. So if a child is reported missing in Greece, authorities will assume that traffickers have taken them to Germany via Austria," said Shalev-Greene, who co-authored the report. It was then unclear whether Germany, Austria or Greece would be responsible for the case.

"There has to be a decision as to who is responsible because this is happening so frequently," she said.

Europol said finding missing children did not fall within its remit. "Our role is to support law enforcement authorities in different member states. We don't have any powers to act alone," its spokeswoman, Tine Hollevoet, said by email.

In an effort to plug the gap in protecting vulnerable children, the International Committee of the Red Cross (ICRC) in collaboration with nati

onal Red Cross societies has launched an online tracing project, Trace the Face, for parents looking for their children, and children searching for family members. Lucile Marbeau, a spokeswoman for the ICRC delegation in France, told the Thomson Reuters Foundation there were some 300 unaccompanied children in the Trace the Face database.

The Greek children's charity, Smile of the Child, also runs a tracing service in collaboration with Missing Children Europe. To trace missing children, Smile of the Child staff contact national and international police, hospitals, forensic services, nongovernmental organizations, embassies and other hotline centers in Europe. Although the hotline has been effective over a decade in finding missing European children, it has not been so successful working with missing refugee children – in 2015 the Greek hotline handled 13 cases, and is yet to claim one success.

"We follow the same procedures with refugee children as with EU nationals, but the circumstances are harder - there's less information about them," said Athanasia Kakarouba, the hotline coordinator. Such efforts do not add up to a coordinated effort to trace and protect refugee children alone in Europe, activists say.

"As so many of these children move from country to country, it's clear that there needs to be coordination at European level," said Delphine Moralis, the head of Missing Children Europe.

In April, the Federal Criminal Police Office (BKA) revealed that 5,835 migrant children were missing last year in Germany alone. More than 1 million migrants entered Europe last year, many fleeing wars in the Middle East. Europe has been slammed for lacking a collaborative response to the crisis. The U.N. refugee agency encouraged European countries to do more to share the burden of the international community in the migrant crisis, especially when compared to Syria's neighboring countries.
RELATED TOPICS