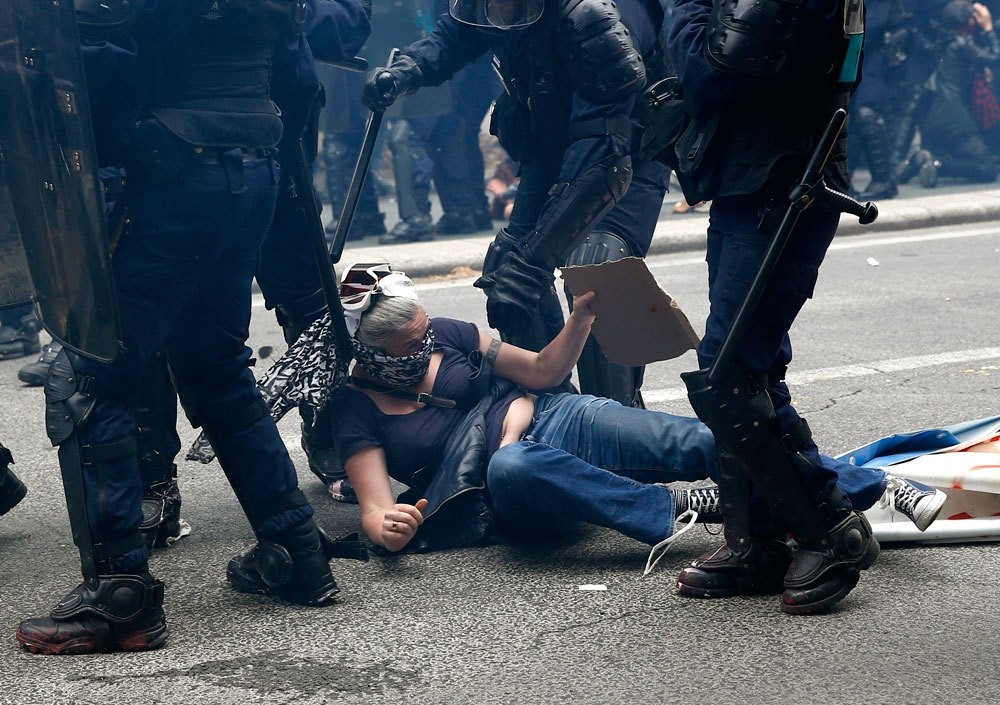 A Paris police official said 26 people have been wounded, including 20 police officers, in violence during street protests against a contested French labor reform.

Johanna Primevert added that some 21 people were detained during Tuesday's action, which saw protesters in Paris throw projectiles at police officers, who responded with tear gas.

Tens of thousands of people attended the demonstrations against the proposed law to loosen labor rules.

Street protests are planned across France, rail workers and taxi drivers are going on strike and the Eiffel Tower is due to be closed as part of a protest against a reform aimed at loosening the country's labor rules.

The company operating the Eiffel Tower said in a statement that the monument is closed Tuesday because the public's safety couldn't be ensured due to a strike among workers.

Taxi drivers temporarily blocked some of Paris' main streets. And seven unions and student organization called for demonstrations against the proposed labor law, which is being debated in the Senate.

In a separate protest, Air France pilots are striking to demand better working conditions. About 20 percent of all Air France's flights were cancelled, according to the company.

The protests came as part of a series of recent open-ended strikes in rail, energy and in other sectors amid protests that have kept shaking the country since March 9th.

Unions have been demanding that the left-wing government scrap the contested labor bill - dubbed the El Khomri law after Labor Minister Myriam El Khomri - claiming it paves the way for fundamental changes in labor law at the expense of workers.

Rallies have been taking place in around 50 towns and cities across the country. The biggest protest started at around 1.00 p.m. (1100GMT) local time at the French capital with a leading sign reading: "For the withdrawal. For new rights."

The CGT labour union leader Philippe Martinez said earlier that the Paris march would be the biggest show of strength in three months.

"This is not the end. The struggle is far from over," Martinez said.

On Monday, just 4.5 percent of employees of the country's SNCF rail company took part in an ongoing strike that began two weeks ago.

The Eiffel Tower was closed to tourists on Tuesday as staff also joined the protest movement.

The French Senate began debating the reform on Monday. It is set to conclude on June 24.

Unions have already called for new protests on June 23 and 28.