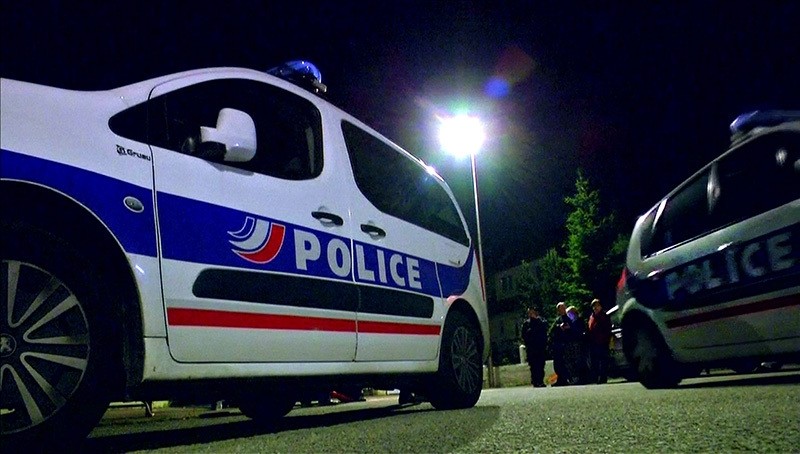 Still image taken from video shows police vehicles at the scene near where a French police commander was stabbed to death in front of his home, June 14, 2016 (Reuters)
by Daily Sabah with Wires Jun 14, 2016 12:00 am

In a new terrorist attack in France, a police officer and his partner were stabbed to death by an alleged extremist. Interior Minister Cazeneuve warned that Europe remains under high threat from extremist violence

A man claiming allegiance to DAESH killed a French police officer and his partner, investigators said on Monday, in what authorities blasted as an "appalling terrorist act."

President François Hollande held a top-level security meeting after the overnight attack, which took place as France is on high alert for the Euro 2016 football championship.

Sources close to the investigation identified the suspect, who was killed in a dramatic police operation, as Larossi Abballa, 25. They told Agence France-Presse (AFP) he had been previously sentenced for a role in an extremist group with links to Pakistan. He stabbed the police officer repeatedly outside his home in Magnanville, a northwestern suburb of Paris, before holing up inside with the officer's partner and the couple's 3-year-old son. Loud detonations were heard at the scene as elite RAID police moved in following failed negotiations with the attacker. Officers found the woman's body after they stormed the house, and her attacker was killed during the assault, Interior Ministry spokesman Pierre-Henry Brandet said.

The couple's toddler son was "in shock but unharmed," a prosecutor added, saying the boy was receiving medical attention.

The slain officer was 42 years old and worked in nearby Les Mureaux. His partner was also a local police official. Their identities have been withheld.

Sources close to the inquiry, speaking on condition of anonymity, said he claimed allegiance to DAESH while talking to officers. SITE Intelligence Group, a U.S.-based monitor, cited the DAESH-linked Amaq News Agency as saying on its Telegram channels: "Islamic State [DAESH] fighter kills deputy chief of the police station in the city of Les Mureaux and his wife with blade weapons near #Paris."

Abballa, the sources said, had been sentenced in 2013 to a three-year term, six months of which were suspended, for "criminal association with the aim of preparing terrorist acts," in a trial with seven other defendants.

Hollande met at the Elysee presidential palace early Tuesday with Prime Minister Manuel Valls, Interior Minister Bernard Cazeneuve and Justice Minister Jean-Jacques Urvoas. Hollande said the 42-year-old officer and his partner, who were attacked at their home northwest of Paris overnight, were "murdered in cowardly fashion." "It's unquestionably a terrorist act," Hollande said, stressing that France, which is currently hosting the Euro 2016 football championship is still "facing a very significant terrorist threat."

"France is not the only country concerned [by the terrorist threat], as we have seen, again, in the United States, in Orlando," he said.

Cazeneuve also said more than 100 people seen as potential threats have been arrested in France this year, including in recent weeks.

The operation in Magnanville saw police move in quickly to evacuate residents from the neighborhood and block off roads, an AFP journalist saw. A helicopter was on the ground a few hundred meters away from the scene of the attack along with fire trucks and ambulances. RAID officers "arrived rapidly on the scene. Negotiations were launched and an assault plan was put in place," Brandet said. But the negotiations were unsuccessful and authorities decided to launch an assault around midnight, he added.

The killing came in the wake of a gunman claiming to be acting in the name of DAESH shot dead 50 people at a gay nightclub in Orlando, Florida on Sunday in the worst mass shooting in the U.S. history.

France has been on particularly high alert as it hosts Europe's top sporting event, the month-long Euro 2016 football championship tournament, and is still under a state of emergency after deadly DAESH attacks in November.

The threat "is high in France, it's high in Europe, it's high in the Western world as shown by the events that happened 48 hours ago in the United States," Cazeneuve said.

Amid high threat from terrorism, three months of student and union-led protests have also descended into violent clashes between demonstrators and police. Nationwide strikes and protests still disrupt transportation as the country hosts the Euro 2016. Unions are tapping months of public anger over a proposed labor reform bill that would make it easier for employers to fire workers and lengthen working hours. Many videos showing police and security forces apparently using disproportionate force on protesters have attracted viewers and controversy, including of a police officer aggressively shoving a woman and throwing her to the ground.