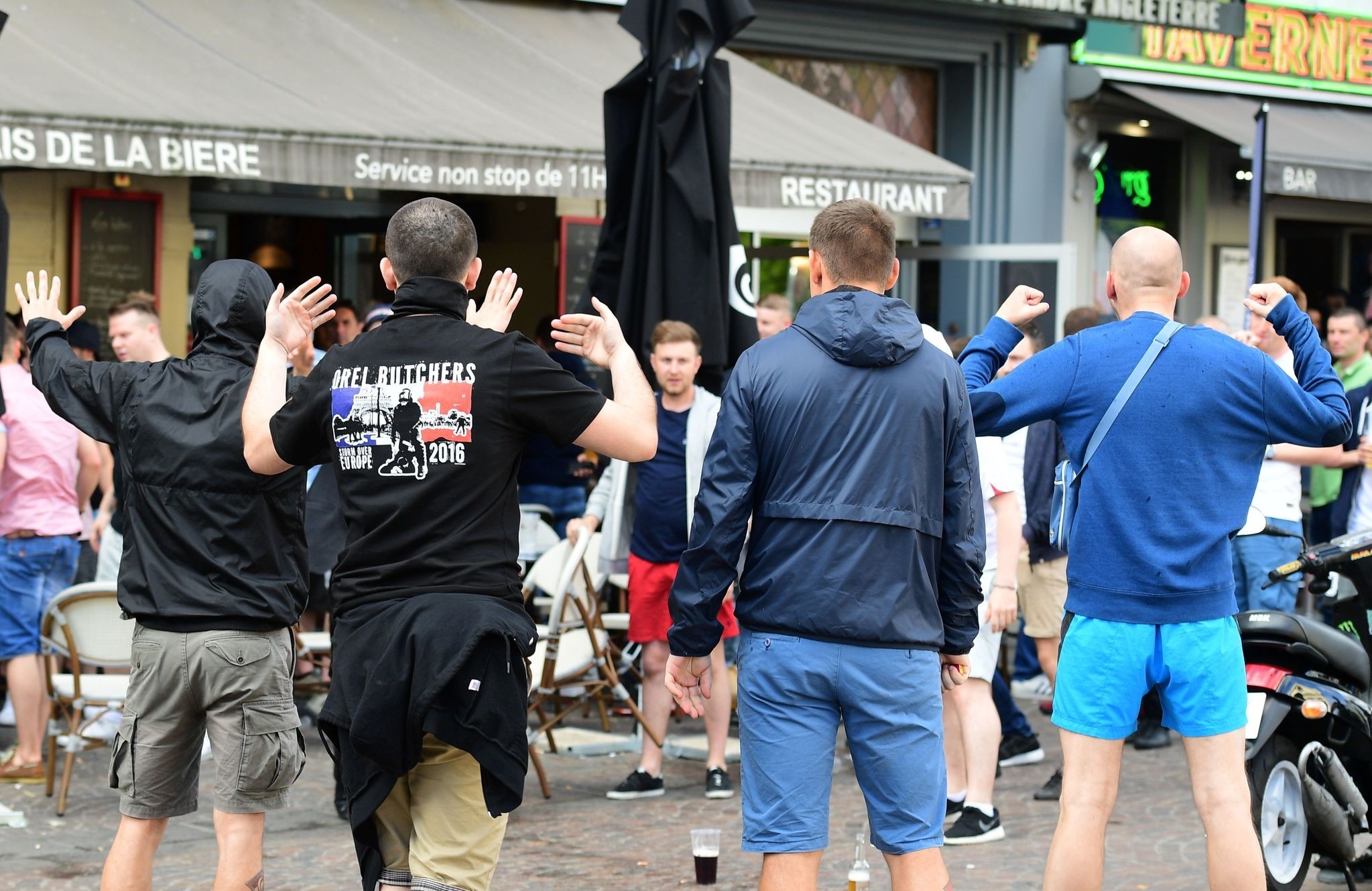 Russian football fans taunt Slovakian fans sitting in a cafe in the city of Lille on June 14, 2016. (AFP Photo)
by Jun 15, 2016 12:00 am
Russia's Foreign Ministry summoned French Ambassador Jean-Maurice Ripert on Wednesday to explain to him the "discriminatory character" of the recent detainment of dozens of Russian football fans.

"Further anti-Russian sentiment regarding our national team's participation in the European football championship has the power to substantially harm Russian-French relations," the Foreign Ministry said in a statement on its website.

Forty-three people, including three drivers, who were taken into custody while heading from a match in Marseille to Lille, the ministry said. French authorities ordered them to be detained for a period of 48 hours, according to the statement.

Over the weekend, more than a hundred Russian and English football fans clashed in Marseille amid a match that their countries' teams tied at 1-1.

On Wednesday, Russia lost a match against Slovakia 2-1, but violence did not erupt at the stadium.

Ten people were in police custody in Lille on Wednesday afternoon, three for public intoxication and seven for violence, the AFP news agency reported.

Russian President Vladimir Putin had a phone call with Slovakian Prime Minister Robert Fico the previous day to discuss bilateral relations, according to a Kremlin statement.

The Life News agency, reputed to have close ties with the Russian security services, said the leaders discussed ways to prevent violence at the match.

Several senior Russian officials have publicly supported the country's fans, but Kremlin spokesman Dmitry Peskov has condemned the violence and said Putin did not agree with the other officials.

Following clashes over the weekend that left at least 35 people injured, Russia was handed a suspended disqualification by UEFA and warned that it would be sent home if supporters continued to take part in stadium crowd disturbances.

Marseille prosecutor Brice Robin called the Russian hooligans "highly trained" and organized, saying they posed a serious risk. Not one person of the group, estimated by Robin to be about 150 people, was arrested by French police.

The violence could jeopardize the popularity of the games among potential foreign visitors to Russia's World Cup in 2018, for which Russia is spending an estimated 10 billion euros (11 billion dollars).

Russia's Sport Minister Vitaly Mutko, who is also the acting head of the Russian Football Union, on Tuesday joined a chorus of high-ranking officials expressing support for their countrymen who clashed with English fans.

"Our fans are being constantly provoked," Mutko said in comments carried by state news agency TASS. "There is no guarantee that the disturbances will not happen again."

Igor Lebedev, a member of the Russian Football Union's executive committee and a vice speaker of Russia's parliament, blamed the inability of the French police for the violence on his Twitter page.

"I don't see anything terrible in the fans' fight. On the contrary, our guys did a good job. Keep it up!" Lebedev said.

Vladimir Markin, spokesman for Russia's federal Investigative Committee, said Europeans were "surprised to see a real man as he should be" because "they are used to seeing 'men' only at gay parades."
Last Update: Jun 15, 2016 7:35 pm
RELATED TOPICS