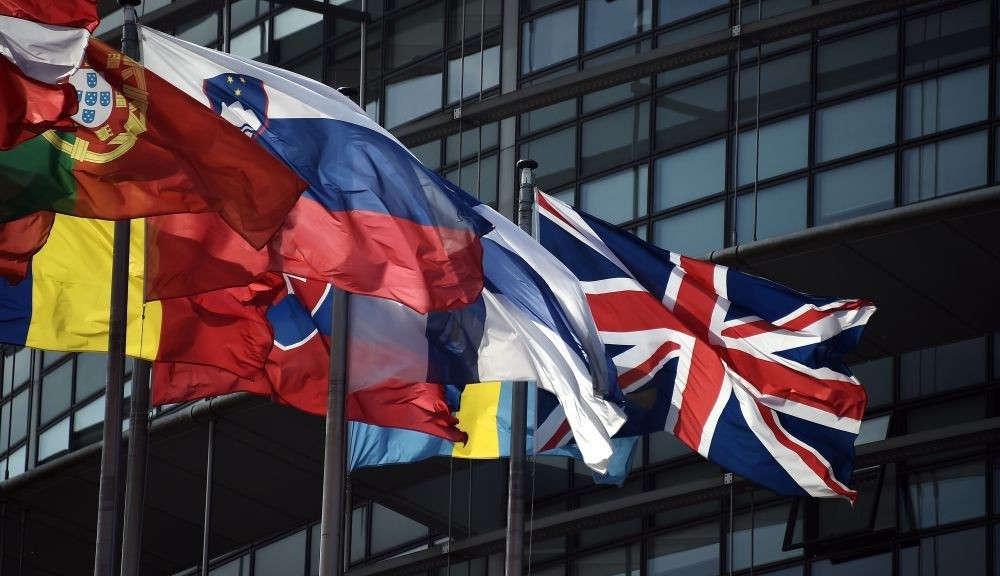 The British Union Jack (R) flies among European Union member countries' national flags in front of European Parliament in Strasbourg, France, June 9.
by Compiled from Wire Services Jun 17, 2016 12:00 am
The foreign ministers of Germany and France Wednesday cautioned against a Brexit vote, with Berlin's top envoy warning it could eventually lead to the "disintegration" of the European Union.

"It would be a shock for the EU that would require mutual assurances that the EU continues to stick together and that a very successful decades-long process of integration doesn't in the end turn into disintegration," said Frank-Walter Steinmeier.

Speaking at a joint press conference with French counterpart Jean-Marc Ayrault ahead of the June 23 referendum, he added: "We can both say that we want the majority in Britain to make the right decision, and the right decision from our point of view can only be to remain in Europe. Europe would be lacking a lot if Great Britain decided to leave."

The "remain" camp, led by conservative British Prime Minister David Cameron, has been set back by a series of polls putting the Brexit supporters in the lead in recent days. "The British are facing a choice," said the head of French diplomacy, during a joint visit with Steinmeier to Brandenburg near Berlin. A vote that would leave Britain as an outsider to the EU is "a reality which we don't want." He added that "polls go up and down and it is normal and this will happen, I think, to the very end." Ayrault promised Eurosceptics that the bloc would keep evolving with the times. "Europe can't be static, it must keep moving," he said. "Today it faces contradictions, slow-downs, difficulties, anxieties and fears. We want to give Europe a new dynamism."

"I know it is very difficult for us to be optimistic today," Tusk said referring to next week's referendum in Britain. "We know the latest polls, it's still 50-50, everything is possible," he told reporters after talks in Helsinki with Finnish Prime Minister Juha Sipila.

The "direct results of a Brexit would be really dangerous for our economy, in the U.K. and the rest of Europe," Tusk said of possible ramifications of a vote to leave the bloc. Further, the "political and geopolitical consequences are completely unpredictable," amid strained ties with Russia, for instance. If British voters vote to leave, Tusk warned of "seven years of political limbo and uncertainty in our relations."

If Britain stays, Cameron could negotiate a "new settlement" in "less than one year," he said. Tusk said Britain has "achieved a position of a key state in the EU, "whose voice is respected, today more than ever before." "There are so many things we can do together. Leaving now doesn't make any sense," he summed up. Tusk and Sipila said they believed economic sanctions against Russia would be extended. They were imposed in 2014 over Russia's role in the Ukraine crisis. Sipila, whose country has seen exports hit by Russian counter sanctions, cited lack of progress "by all parties."
RELATED TOPICS