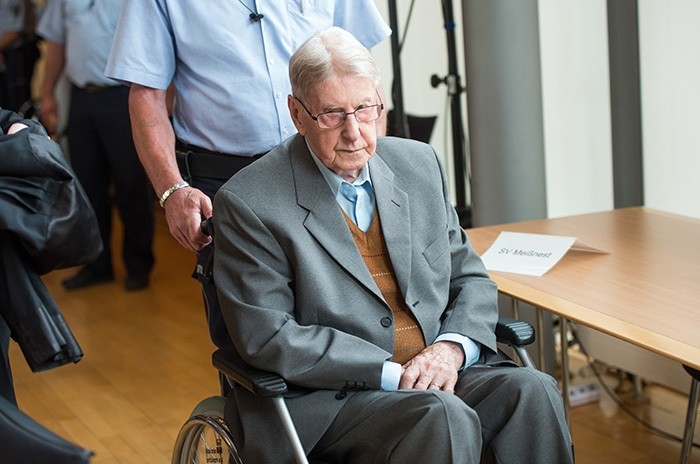 In this Saturday June 11, 2016 file photo, 94-year-old former SS guard at the Auschwitz death camp Reinhold Hanning, arrives at a courtroom in Detmold, Germany. (AP Photo)
by Compiled from Wire Services Jun 17, 2016 12:00 am
A 94-year-old former Auschwitz guard was convicted on Friday of being an accessory to the murder of 170,000 people, according to the judge presiding over what could be one of Germany's last Holocaust trials.

Reinhold Hanning was sentenced to five years in prison for his role in facilitating the slaughter at the Auschwitz death camp in Nazi-occupied Poland.

Some 1.1 million people, most of them European Jews, perished between 1940 and 1945 in Auschwitz-Birkenau before it was liberated by Soviet forces.

War crimes trials by the victorious western Allies, and later by tribunals in West and then reunified Germany, have convicted around 6,650 people since 1945 -- only a tiny fraction of those who wore Nazi or SS uniforms -- says historian Andreas Sander.

Only seven percent of these were for cases of "mass murder", including the genocide of the Jews and other minorities.

And only nine percent of the sentences ran beyond five years in prison, including 166 life sentences. Most convictions were over denunciations or persecutions during the Nazi era.

However, those figures may reflect not just a desire for justice but also the realities of the Cold War, when the regime also used alleged fascist links to jail its critics and enemies in political trials, says Daniel Bonnard of Marburg University.