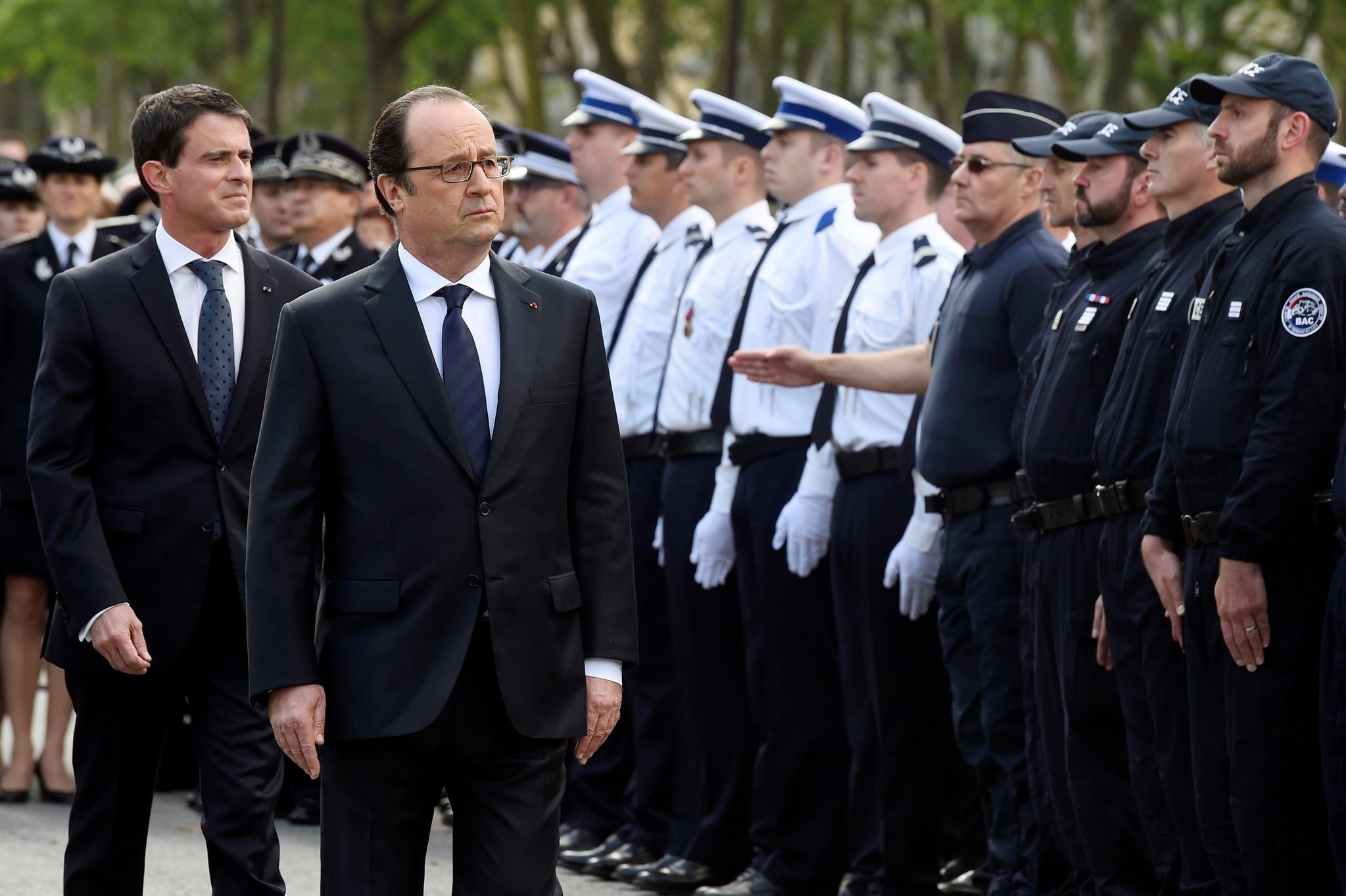 French President François Hollande and Prime Minister Manuel Valls were left hanging by a policeman during the memorial of two police officers killed in a Daesh attack Monday near Paris.

Attending the ceremony on Friday in Versailles, the president and PM walked down a line of hundreds of police officers standing in front of the coffins of slain officers Jean-Baptiste Salvaing and his partner Jessica Schneider.

But when they approached an officer in the line on crutches to shake his hand and offer condolences, he refused.

Hollande quickly went on to the next person but PM Valls stopped and confronted the officer for rejecting the handshake.

The two had a brief conversation but it is not known what was said.

The police officer, who remains anonymous, said during an interview on French television channel TF1 "There are too many problems in the police. We've had enough," BBC reported.

The police officer pointed out that there were only three vehicles for 40 staff in Mantes-la-Jolie, the west of Paris.

"…What are we supposed to do with this?", the officer complained.

It seems that even the police are not happy about France's current situation.

In the wake of Paris attacks last year, France's police force seems to be 'overstretched,' especially after anti-government protests broke out due to contested labor reforms.

Desperate for some good news after last year's terror attacks were followed by months of industrial unrest, political turmoil and floods, France is currently hosting Euro 2016, the European football championship.

However, the ongoing labor unrest has disrupted fans' high spirits in the Euro 2016. While the streets are drowning in rubbish stink, football fans have also been experiencing big security problems. Talks between France's labor minister and the head of the country's main union failed to break a deadlock over labor market reforms on Friday, which have led to months of anti-government protests. Tens of thousands of people took to the streets for the latest protests, descending into the worst violence since the wave of demonstrations and strikes began in March. The unrest in Paris, which left 40 injured, prompted the government to threaten a ban on demonstrations, while the CGT faulted security forces for failing to quell the violence. Ten protesters were on Friday given prison terms ranging from four months behind bars to six-month suspended sentences.

France's security forces also failed to prevent violence between Russian and English fans recently. A French court on Thursday jailed three Russian football supporters over Euro 2016 fan unrest while a far-right Russian agitator was thrown out of the country. Security forces watched English fans closely after 36 people were arrested Wednesday in Lille as riot police fired teargas at groups of fans. Security forces fear the tournament could be a terrorist target and the worries were reinforced after the murder of two police officers near Paris this week by a Frenchman with links to Daesh.