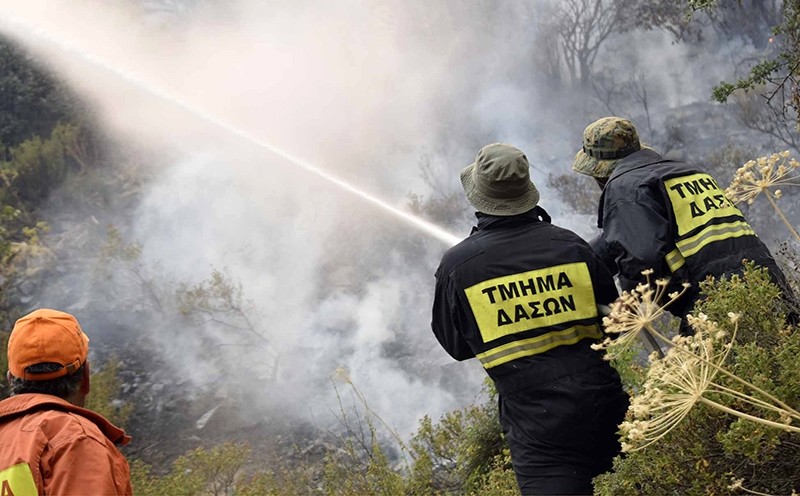 A Cypriot reservist volunteer firefighter (L) and members of the forest department battle fire on June 21, 2016 during a forest fire above the Cypriot village of Evrychou in the Troodos mountain area (AFP Photo)
by Daily Sabah with Reuters Jun 21, 2016 12:00 am

Greek Cypriot administration on Tuesday accepted Turkey's offer to provide assistance for the wildfire in Troodos mountains, located on southwest of the island's capital, Nicosia.

According to reports, four villages have been evacuated as a result of the fire and two firefighters have lost their lives.

The Ministry of Forestry had earlier said that Turkey is ready to provide help to fight the fire in Cyprus, upon instructions by Prime Minister Binali Yıldırım.

Two helicopters in Anamur and Silifke and an aircraft in Antalya are set to be dispatched to Cyprus to extinguish the fire, the ministry said.

The fire, possibly started by an attempt to burn dry stubble, broke out on Sunday in the foothills of the Troodos mountain region of the eastern Mediterranean island.

It has been fanned by high winds and scorching temperatures, hampering efforts by firefighters backed by water bomber aircraft from Greece and Israel and helicopters from the British military bases in Cyprus. French and Italian air support was also expected on the island later on Tuesday.

Cypriot President Nicos Anastasiades asked for a postponement of a meeting scheduled with Turkish Cypriot President Mustafa Akıncı, part of a series of talks focused on reunification of the war-divided island.