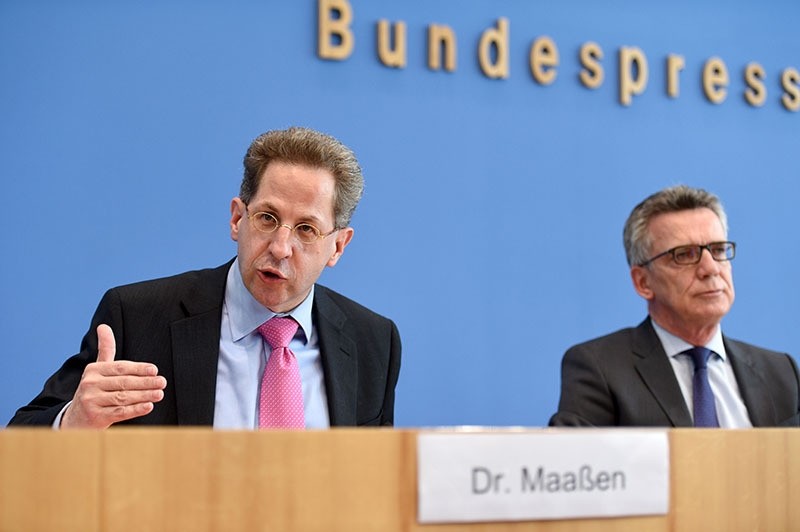 Domestic intelligence agency chief Hans-Georg Maassen (L) and German Interior Minister Thomas de Maiziere (R) address a press conference in Berlin on June 28, 2016 (AFP)
by Jul 02, 2016 12:00 am
Attacks by Daesh terrorists pose the biggest security threat for Germany and events like the shooting and bombing in Istanbul this week could happen in Germany, the head of the country's domestic intelligence agency (BfV) told a Saturday newspaper.

Three suspected Daesh suicide bombers killed 44 people at Istanbul's Atatürk Airport on Tuesday, the deadliest in a string of attacks in Turkey this year.

"We can't rule out attacks like those in Istanbul also happening in our country," Hans-Georg Maassen told German newspaper Frankfurter Allgemeine Zeitung.

He said recent military defeats for Daesh were not demoralizing the terrorists here, and attacks in Europe were becoming ever more important for Daesh to intimidate people and send the message to followers that "we're still here".

A survey by pollster Emnid for Bild am Sonntag newspaper found that almost two-thirds (62 percent) of Germans expect an attack like those in Istanbul or Brussels to happen at a German airport while 33 percent did not.

More than half (57 percent) of the 502 people polled called for tighter security in front of airport buildings in Germany because of the threat while 39 percent did not want that.