Tony Blair under fire over decision to declare war on Iraq 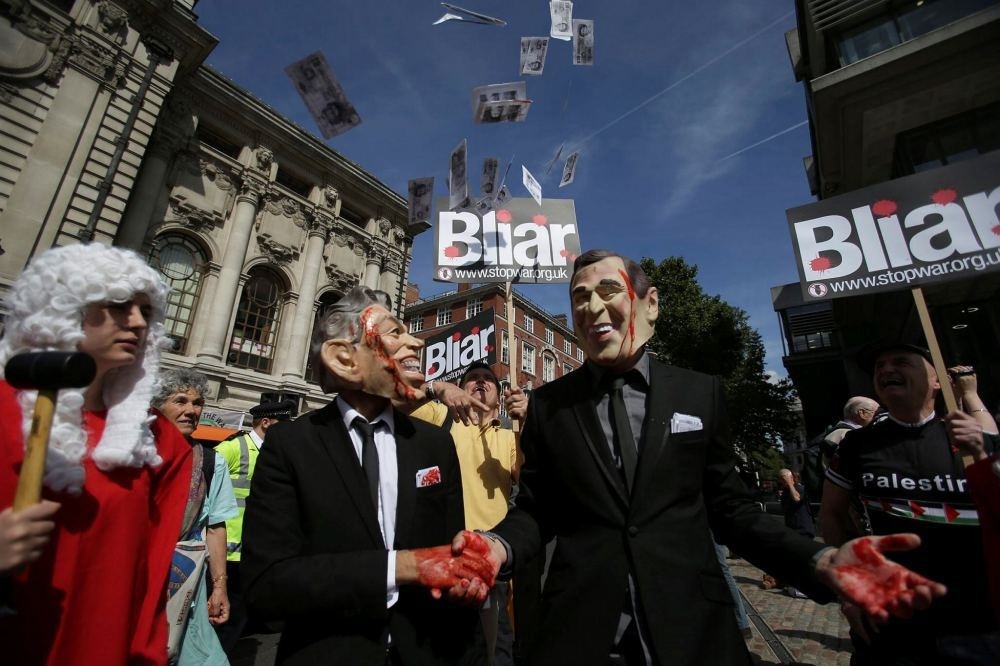 Britain's former Prime Minister Tony Blair is accused of dragging the U.K. into war in Iraq and blindly following the U.S. The infamous British politician was called to account for the deaths of British troops and the emergence of DAESH

Prime Minister Tony Blair led Britain into an unsuccessful war in Iraq through a mix of flawed intelligence, "wholly inadequate" planning and an exaggerated sense of the U.K.'s ability to influence the United States, according to a damning official report on the conflict that was published Wednesday. The government-commissioned inquiry fell short of delivering what many bereaved families sought, a declaration that the 2003 war was illegal. But its 2.6 million words give the most comprehensive verdict to date on the mistakes of a conflict whose violent aftershocks still rattle the world. Blair, however, stood by his decision to join U.S. President George W. Bush in toppling Iraqi leader Saddam Hussein. "I believe I made the right decision and that the world is better and safer as a result of it," he said. Thousands of protesters in London gathered and said 'Blair lied, thousands died'. 'Blair is a war criminal,' the protesters shouted. 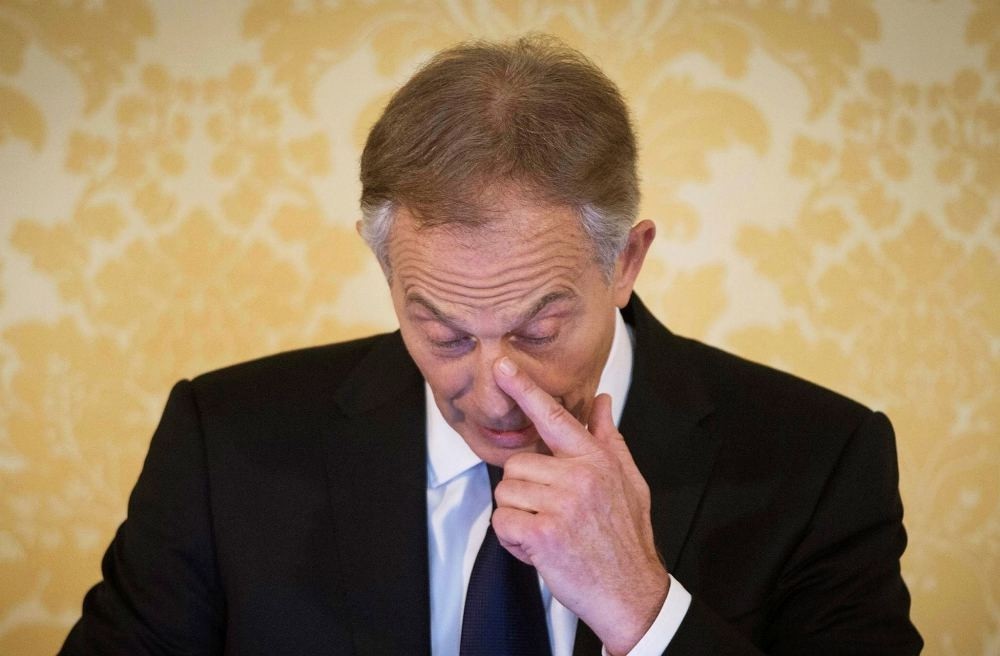 The decision to go to war was the most contentions act of Blair's decade as prime minister between 1997 and 2007. By the time British combat forces left Iraq in 2009, the conflict had killed 179 U.K. troops, almost 4,500 U.S. personnel and more than 100,000 Iraqis. Iraq descended into sectarian strife after the occupiers dismantled Saddam's government and military, unleashing chaos that helped give rise to DAESH. The inquiry, which was seven years in the making and headed by retired civil servant John Chilcot, concluded that Britain joined the U.S.-led invasion "before the peaceful options for disarmament had been exhausted." "Military action at that time was not a last resort," Chilcot said as he published the report. The war overshadows the legacy of Blair, whose government has been accused of exaggerating prewar intelligence about Saddam's alleged weapons of mass destruction. As Chilcot introduced his report at a London conference center, dozens of anti-war protesters with placards reading "Bliar" rallied outside. An emotional but defiant Blair told a news conference that going to war in Iraq was "the hardest, most momentous, most agonizing decision I took" as prime minister. He said that "I express more sorrow, regret and apology than you may ever know, or can believe," for all the things that went wrong. But, he added: "I did not mislead this country. I made the decision in good faith." And he said the world was a safer place without Saddam, whom he labeled "a wellspring of terror."

Bush spokesman Freddy Ford said the former president was cycling with wounded veterans on his Texas ranch and had not had the chance to read the report. "Despite the intelligence failures and other mistakes he has acknowledged previously, President Bush continues to believe the whole world is better off without Saddam Hussein in power," he said. For families of British troops who died in the conflict, the report's forensic analysis provides some vindication of their struggle to hold the war's planners to account. But it did not declare the conflict illegal, which might have opened the way for Blair to be prosecuted for war crimes.

Chilcot refrained from saying whether the 2003 invasion was legal and didn't accuse Blair of deliberately misleading the public or Parliament. But he said that "the circumstances in which it was decided that there was a legal basis for U.K. military action were far from satisfactory." Peter Goldsmith, Britain's attorney general at the time, initially advised the invasion would be illegal without a U.N. Security Council resolution, but changed his mind shortly before war began. Chilcot said Goldsmith's reasoning was not properly examined at the time by the government.

Relatives of soldiers killed in the conflict said they hadn't ruled out legal action, although it's unclear what form that could take. The International Criminal Court can look into alleged war crimes by British troops in Iraq but says the legality of the decision to go to war falls outside its jurisdiction. Sarah O'Connor, whose airman brother died in a plane crash in Iraq in 2005, branded Blair "the world's worst terrorist."

The inquiry was set up in 2009 by then-Prime Minister Gordon Brown, who was under pressure for a public accounting of the conflict. Chilcot and his panel heard from 150 witnesses and analyzed 150,000 documents, but the report has been repeatedly delayed, in part by wrangling over the inclusion of classified material. In measured but devastating language, Chilcot said "the people of Iraq have suffered greatly" because of a military intervention "which went badly wrong." A U.S. Senate Intelligence Committee investigation a decade ago found prewar intelligence failings and concluded that politicians had overstated the evidence for weapons of mass destruction and ignored warnings about the violence that could follow an invasion. Chilcot's report found similar failings. It said Blair's government presented an assessment of the threat posed by Saddam's weapons with "certainty that was not justified." The military mission was undermined by a failure to plan for Iraq's reconstruction and by a surge in chaos and violence that the invaders should have seen coming, the report said. Blair conceded that prewar intelligence turned out to be wrong, and the conflict's aftermath was "more hostile, protracted and bloody than ever we imagined." But Chilcot said Blair should have been able to imagine it. "The risks of internal strife in Iraq, active Iranian pursuit of its interests, regional instability and al-Qaida activity in Iraq were each explicitly identified before the invasion," he said. The report also provides a sobering assessment of the power imbalance in the trans-Atlantic "special relationship." It includes a note from Blair to Bush written eight months before the invasion. Blair promised, without consulting government colleagues, "I will be with you whatever." The report said Blair went to war to stand shoulder-to-shoulder with Britain's main ally, only to find the U.K. excluded from most important decisions about the military campaign and its aftermath. "Mr. Blair, who recognized the significance of the post-conflict phase, did not press President Bush for definite assurances about U.S. plans," the report concluded. And it said that after the invasion, Britain had only "limited" ability to influence U.S. decisions.

The report found failings by British military chiefs who did not provide adequate equipment to U.K. forces. It concluded that Britain's combat mission "ended a long way from success" and saw British forces make a "humiliating" deal with militias in southern Iraq to avoid attacks. Chilcot also criticized spy chiefs who failed to ensure their partial intelligence about Saddam's weapons was not hardened into certainty by government spin. He said they also neglected to consider "that Iraq might no longer have chemical, biological or nuclear weapons", which turned out to be the case. The report also faulted Blair for making key decisions with only a few aides rather than through collective Cabinet consultation. While the report may help Britain draw a line under a difficult national episode, it offers little comfort for Iraq. The country continues to live with violence, including a massive weekend bombing in Baghdad claimed by DAESH that killed at least 175 people. "Since 2003 until now, our country has been a scene of destruction, killing, massacres, explosions and sectarianism," Baghdad resident Ali al-Saraji said. He said Blair "destroyed our country."

Meanwhile, Kadhim al-Jabbouri who struck the statue of Saddam Hussein in downtown Baghdad with his sledgehammer in April 2003 said he regret for doing so. In an interview with BBC he said "Now, when I go past that statue, I feel pain and shame. I ask myself, Why did I topple that statue?"
RELATED TOPICS