Cameron out, May in, ‘Chief Mouser’ Larry to stay put at 10 Downing Street 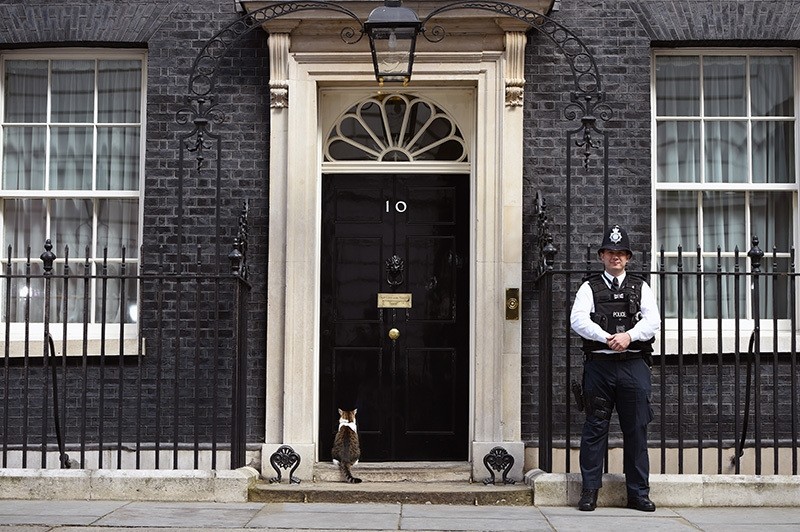 Prime Minister David Cameron will be leaving 10 Downing St. — but another resident of the famous address won't be going anywhere.

Larry, the resident Downing Street cat, will remain in place, having cemented his position at No. 10 despite widespread doubts about his vermin-hunting abilities.

The 9-year-old rescue tabby tomcat was brought in to catch rats and mice at the famous-but-infested residence, but his record of kills has been hotly disputed. Nonetheless, Downing Street said Wednesday that Larry's tenure will continue.

No. 10 has described Larry in the past as a cat who "brings a lot of pleasure to a lot of people" and was Tuesday photographed standing guard at the front gate when incoming leader Theresa May walked past.

The tabby is the government's official Chief Mouser to the Cabinet Office, a tradition with its claws in the 16th century court of Henry VIII.

After TV crews repeatedly spotted mice sprinting across Cameron's doorstep in 2011, the premier took his family to a south London animal shelter and picked Larry. The Mays and Camerons have decided that Larry should continue to keep ravaging the rodents of Downing Street. Larry spent much of Wednesday keeping watch on the press pack instead.

"Sadly I can't take Larry with me, he belongs to the house and the staff love him very much, as do I," Cameron said, addressing mischievous social media gossip that the cat and PM did not get on.

David Cameron's last appearance in parliament as British Prime Minister ended in a standing ovation after a bravura 36-minute performance that taunted his rivals, reflected on his legacy and confessed his love for the office cat.

After six years as leader, Cameron will formally hand in his resignation to Queen Elizabeth later on Wednesday, passing control of the country to fellow Conservative Theresa May, who will be in charge of negotiating Britain's exit from the European Union.

Speaking in a packed parliament, with lawmakers, media, aides and spectators jammed into every corner of the ornate debating chamber, Cameron answered questions with the air of a man looking forward to an afternoon off.

"This morning I had meetings with ministerial colleagues and others," he said. "Other than one meeting this afternoon with her majesty the Queen, the diary for the rest of my day is remarkably light," he said to laughter, as his wife Samantha and their children looked on from the public gallery.

Cameron, often praised for his statesman-like demeanor, cut a more relaxed figure as he laid into his political rival Jeremy Corbyn, whose own future is subject to a protracted and acrimonious battle within the opposition Labour Party.

"We've both been having these leadership elections. We (Conservatives) got on with it: we've had resignation, nomination, competition and coronation. They haven't even decided what the rules are yet," he said, drawing roars of support from his side of the chamber.

"If they ever got into power it would take them about a year to work out who would sit where."

Even the usually earnest Corbyn came with his own pre- prepared gags to the box-office weekly "Prime Minister's Questions" session.

Giving up one of his allotted six questions to pay tribute to Cameron, Corbyn asked him thank his mother for her fashion advice - a nod to a previous rowdy exchange where Cameron said his mother would want the often unkempt Corbyn to "put on a proper suit, do up your tie and sing the national anthem."

Jokes apart, Cameron sought to shore up his legacy as a reforming prime minister, highlighting his government's efforts to stabilize the post-financial crisis economy and the passing of gay marriage laws.

"I'll never forget the day actually at Number 10 when one of the people who works very close to the front door said to me 'I'm not that interested in politics Mr Cameron, but because of something your lot have done I'm able to marry the person I've loved all my life this weekend,'" he said.

"There are many amazing moments in this job but that was one of my favorites."

He said he would miss the "roar of the crowd" in parliament, but assured his colleagues that he would be willing them on from his new position as a regular lawmaker representing his English constituency of Witney, near Oxford.

"You can achieve a lot of things in politics, you can get a lot of things done and that in the end - the public service, the national interest - that is what it is all about," he said during heartfelt closing remarks that drew tears from some of his fellow lawmakers.

"Nothing is really impossible if you put your mind to it," he said before his party and many rival lawmakers stood to applaud him from the chamber. Even the Speaker joined in, casting aside the strict "no clapping" parliamentary rule.

Here are four other things to know about Wednesday's formal handover of prime ministerial power in Britain from David Cameron to Theresa May.

Queen Elizabeth II sees them come, and sees them go.

As Britain's monarch ascended to the throne in 1952, Winston Churchill was already the prime minister. Since then, the queen has given her royal seal of approval to a dozen prime ministers atop 16 governments. When May arrives at Buckingham Palace, she will become the 13th leader to receive Elizabeth's royal assent in a private ceremony that marks the moment when May succeeds Cameron as leader of Britain's year-old Conservative government.

First the queen bids a formal farewell to Cameron, Britain's leader since 2010, who as part of his office has held weekly "private audiences" with Elizabeth. On Wednesday, he arrives to the palace as a leader, and leaves merely a lawmaker.

Cameron has represented the Oxfordshire district of Witney, west of London, in the House of Commons since 2001. Now he's forecast to join those Conservative lawmakers lacking ministerial posts known as "backbenchers" who typically bray their approval of the prime ministers' remarks from the background. But Cameron's career is hardly over; he's only 49 and can expect to make a killing on the global speaker's circuit. For now, Witney gains a more full-time MP for the first time since 2005, when Cameron rose to the national stage as Conservative Party leader. He has already relinquished that post to May.

Theresa May becomes prime minister thanks to support from a strong majority of the 330 Conservative lawmakers in the House of Commons. Nobody else had a vote on the matter, because in parliamentary systems the leader of the ruling party gains a preferential right to lead the nation. Given that British parliamentary terms last five years and Cameron's second government was formed only last year, May and her Conservatives don't need to face re-election until 2020. However the prime minister also wields the power to call an early election should May judge that to be in her party's or nation's interest.

Don't let the door hit you on the way out, Mr. Cameron.

Prime ministers normally reside at 10 Downing Street, a Georgian residence with approximately 100 rooms just a few minutes' walk from Parliament. But while Cameron regularly holds press conferences outside the iconic No. 10 door, he and his family actually live next door in No. 11.

Whereas the U.S. presidential system allows departing leaders more than two months to extricate themselves from the White House, Cameron, wife Samantha and their three children, ages 5 to 12, have had barely a day to clear out their home of the past six years.