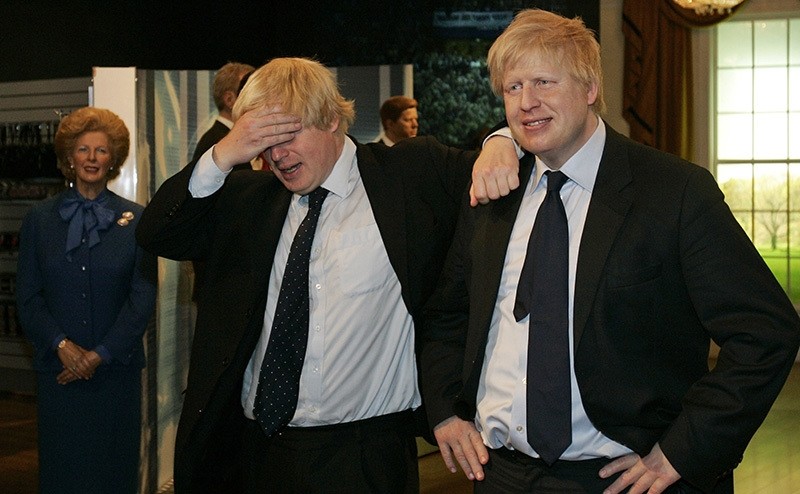 In this Tuesday, May 5, 2009 file photo, Mayor of London Boris Johnson, left, poses with a wax figure of himself at Madam Tussauds wax museum in London (AP Photo)
by Jul 14, 2016 12:00 am
The appointment of leading Brexit campaigner Boris Johnson as Britain's foreign secretary weakens the position of that country's new prime minister, Theresa May, leaders of Germany's Social Democrats (SPD) and Greens have told dpa.

The SPD is the junior partner to Chancellor Angela Merkel's Christian Democrats in the governing coalition. Merkel herself declined to comment on Johnson's appointment during a visit to Kyrgyzstan on Thursday, but said she was "looking forward" to working with May.

Johnson had so far not made a name for himself as a great diplomat, Stegner said. "And now he's negotiating the Brexit. Safe travels!"

The Social Democrat is expecting hard times to come for Britain.

The leader of the Green party faction in the German parliament, Anton Hofreiter, agrees that Johnson's appointment is a bad sign for the upcoming Brexit negotiations. The move "raises doubts about the abilities of the new prime minister," Hofreiter told dpa.

The SPD's party leader, Simone Peters, expects Johnson to "wreak his moody havoc" inside Europe and beyond, she said. May had left "the fox to guard the chickens."

German Foreign Minister Frank-Walter Steinmeier, an SPD member, also acted critical of British politicians during an event at Greifswald University on Wednesday evening, but did not name anyone in particular.

Britain was having a "rude awakening" following the Brexit referendum, he said.

"After irresponsible politicians lured the country into a Brexit" it had been "unbelievable" how some people had "absconded responsibility" and "gone to play cricket" instead, he said.

Steinmeier was likely alluding to Johnson, who was spotted playing cricket the Sunday after the referendum.

After the British vote to leave the European Union on June 23, Johnson was initially considered the favourite in the race to succeed David Cameron as prime minister. However, he unexpectedly pulled out of the race - a move that was widely criticized as shirking responsibility.
Last Update: Jul 14, 2016 2:46 pm
RELATED TOPICS