British PM May gets down to work under Brexit pressure 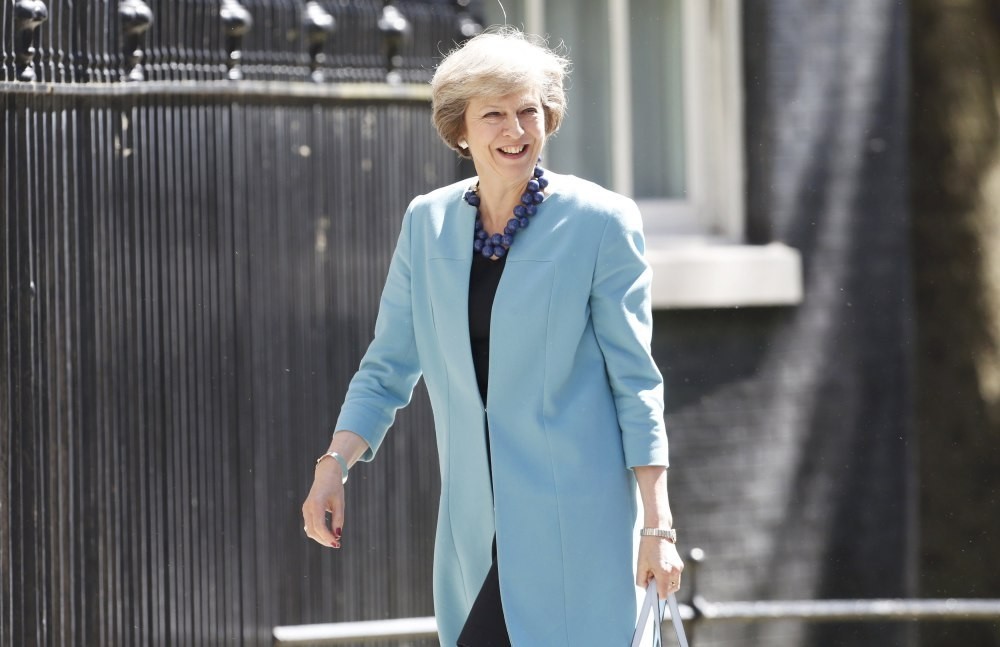 While new British PM Theresa May is filling more cabinet posts, including the surprising choice of Boris Johnson as foreign secretary, EU leaders have heaped pressure on her to launch the country's divorce proceedings from the EU

Theresa May came under immediate pressure yesterday on her first full day as Britain's new prime minister after a series of surprise appointments to her cabinet, including the gaffe-prone Boris Johnson as foreign minister.

Three weeks after Britain voted to leave the European Union, May also came under fire from EU leaders, who pressed her to trigger a Brexit as quickly as possible. And as economic uncertainty swirls from the shock decision to quit the bloc, the Bank of England was mulling possible rate cuts to stimulate the economy.

Seen as a safe pair of hands who campaigned for Britain to remain in the EU, May swept to power promising a "bold new positive role" for Britain outside the bloc. But her first choices for her close team sparked surprise, including that of former London mayor Johnson as Britain's top diplomat and longtime Eurosceptic David Davis in charge of the "exiting the European Union" portfolio.

While Eurosceptic tabloids rejoiced, the Daily Mirror said Johnson's appointment left the kingdom's credibility "hanging by a thread." Johnson himself said he was "humbled."

"We have a massive opportunity in this country to make a great success of our new relationship with Europe and with the world," he said.

EU leaders, still reeling from Britain's decision to become the first country to leave the bloc in its 60-year history, pressed May for a quick divorce. The vote "has created a new situation which the United Kingdom and the EU will have to address soon," European Commission President Jean-Claude Juncker said in a letter to May published on his Twitter account.

May's first calls were to Europe's top two powerbrokers, German Chancellor Angela Merkel and French President François Hollande. During these talks, the new British leader stressed her commitment to delivering Brexit but "explained that we would need some time to prepare for these negotiations and spoke of her hope that these could be conducted in a constructive and positive spirit," a Downing Street spokeswoman said. European Council President Donald Tusk said he looked forward to a "fruitful working relationship."

Russian President Vladimir Putin said he was ready for "constructive dialogue" with Britain's new premier, while White House spokesman Josh Earnest said US officials who had worked with May "found her to be quite effective."

New Finance Minister Philip Hammond, who took over from George Osborne – a stalwart of Cameron's government who fell by the wayside in the transition – confirmed there would be "no emergency budget."

Osborne had been accused of fearmongering during the referendum campaign by saying a new austerity budget might be immediately needed if Britain chose to leave the union. On Thursday the Bank of England will announce whether it will cut interest rates for the first time in more than seven years to try limit the fallout from the vote.

Economists have warned the country may be headed for a recession as financial markets continue to seesaw over the vote and investors hold off on making key spending decisions while waiting to see where the chips fall. The Times said Britain was at a "turning point," with its wealth, stability and identity all at stake. "Economic uncertainty lingers," it said.

May, meanwhile, still has several top cabinet posts to fill, including the health, education, Scotland, work and business briefs. In her first address on the steps of her new Downing Street residence Wednesday May vowed to tackle "burning injustice" in the U.K.

"As we leave the EU we will forge a bold new positive role for ourselves in the world," she said, flanked by her banker husband, Philip. "And we will make Britain a country that works not for a privileged few but for every one of us."

She kept Michael Fallon as defense minister, while former energy minister Amber Rudd was promoted to May's old interior minister job at the Home Office. Meanwhile, on the other side of British politics, the shockwaves continued to create chaos for the opposition Labour Party, whose embattled leader Jeremy Corbyn is facing a leadership challenge.

The under-pressure leftist urged May to "abandon the destructive austerity policies which have damaged our economy and undermined living standards."

Britain voted to leave the EU on June 23 in a historic decision after which, Cameron announced he would resign. Following the decision, hate crimes surged in the country after a campaign dominated by a divisive debate about immigration. More than 3,000 incidents were reported to police across the country between June 16 and June 30, up 42 percent on the same period last year, according to the National Police Chiefs' Council. Anti-racism campaigners had previously reported a surge in attacks, from verbal abuse to physical attacks, in the days after Britain's vote to leave the EU. Support for far-right and anti-migrant parties across Europe had already been surging, especially over fears of a refugee influx from those fleeing violence and persecution in the Middle East and Africa.
RELATED TOPICS