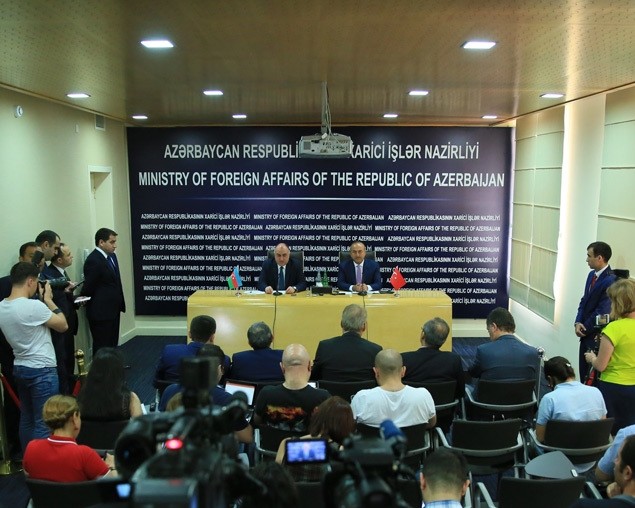 The normalization of the relations between Turkey and Russia would help solve the Nagorno-Karabakh conflict between Armenia and Azerbaijan, Turkish Foreign Minister Mevlüt Çavuşoğlu said on Friday.

"Turkey will [continue to] support a diplomatic and peaceful solution to this matter within the internationally recognized borders of Azerbaijan and its territorial integrity," Çavuşoğlu told a joint press conference with his Azerbaijani counterpart Elmar Mammadyarov in Baku.

"The normalization of our relations with Russia will definitely help in this regard," he added.

The minister said Turkey would share its views on the matter when the Organization for Security and Co-operation in Europe's Minsk Group will hold talks on July 18 in the Turkish capital, Ankara.

"Turkey is a participating state in the Minsk Group. The three co-chairs of the group will come to Ankara on Monday. We will share our views with them," Çavuşoğlu said, adding that Turkey would also continue to have direct talks with Russia on the issue both at presidential and ministerial level.

Co-chaired by France, Russia, and the United States, the group spearheads the OSCE efforts to find a peaceful solution to the Nagorno-Karabakh conflict

Çavuşoğlu said establishing a trilateral mechanism between Turkey, Azerbaijan and Russia would "benefit the region".

The Azerbaijani foreign minister said the presence of Armenian armed forces in the occupied territories of Azerbaijan remained "a threat for the whole region".

Karabakh broke away from Azerbaijan in 1991 with Armenian military support. A peace process has yet to be implemented.

Since the end of war in 1994, Armenia and Azerbaijan have held talks under the supervision of the Minsk Group.