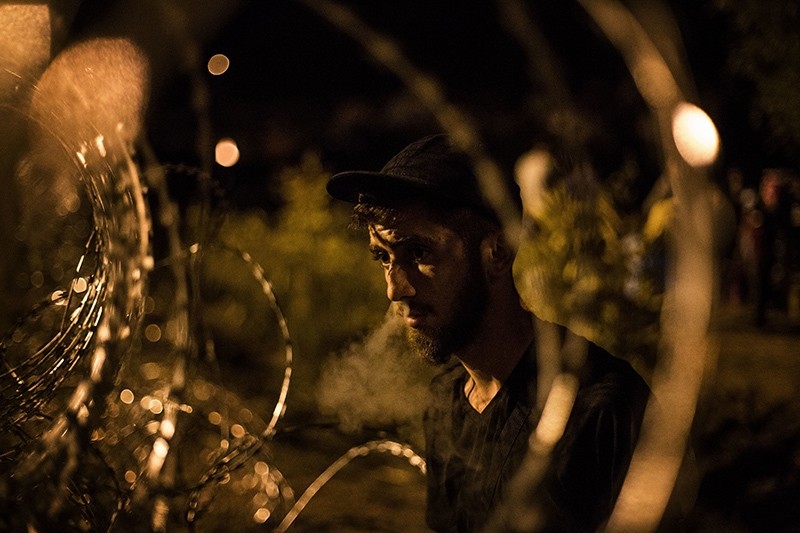 A Syrian refugee looks at Hungarian riot police from the Serbian side of the fence built by Hungarian authorities at the border between Serbia and Hungary, in Horgos, Serbia, Sept. 16, 2015. (AP Photo)
by Jul 15, 2016 12:00 am
The U.N. refugee agency urged Hungary on Friday to investigate reports that its forces had beaten asylum seekers and unleashed police dogs on them - and decried a new law allowing irregular migrants to be taken back outside a border fence.

Janos Lazar, minister in charge of Prime Minister Viktor Orban's office, denied on Thursday that Hungarian police or soldiers had mistreated asylum seekers and described their performance as "outstanding".

Hungary, a member of the European Union, last month adopted a law that allows police to send illegal migrants detained up to eight km (five miles) inside its southern razor-wire border-fence back to the other side of the barrier.

"These restrictions are at variance with EU and international law, and reports of abuse need to be investigated," William Spindler, spokesman for the U.N. High Commissioner for Refugees (UNHCR), told a news briefing.

"Reports include cases of bites by unleashed police dogs, the use of pepper spray and beatings. UNHCR has requested the Hungarian authorities to investigate these reports," he said, calling them "consistent".

Hungarian prosecutors last month opened an investigation into possible criminal abuse by police in the case of a Syrian migrant who drowned in the Tisza River as he was trying to cross into Hungary from Serbia.

Lazar, speaking to a news conference in Budapest on Thursday, said the government had expected political and human rights groups to launch unfounded "attacks" against it.

He said Hungarian police had stopped around 500 people within the eight-km zone and escorted them out to the other side of the fence, which is still Hungarian territory, before telling them to submit their asylum requests in one of two transit zones. Spindler put the number there at 664.

Hungary is allowing only a total of 30 people a day to enter the transit zones at Roszke and Tompa, leading to migrants setting up makeshift camps.

Spindler said more than 1,400 people, mostly women and children, were gathered along the border with Serbia, and that many were fleeing conflicts in Afghanistan, Syria or Iraq and entitled to submit an asylum claim.

"The government has significantly enhanced border security with 10,000 soldiers and police officers and also drone and helicopter surveillance," he said.

"This is the latest in a series in what we see as a deterioration of the protection of refugees and asylum seekers in Hungary."