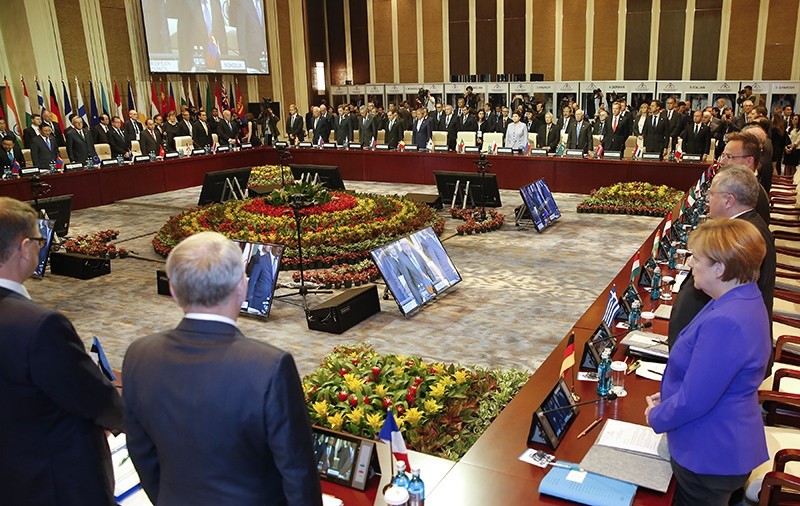 Leaders stand for a minute of silence for the victims of a deadly attack in the French city of Nice, before the opening session of the Asia-Europe Meeting (ASEM) summit in Ulaanbaatar, Mongolia (AP Photo)
by Daily Sabah with Agencies Jul 15, 2016 12:00 am

Leaders throughout the world condemn the brutal terror attack during Bastille day celebrations in Nice, France, with many of them expressing dismay, sadness and solidarity with France over the attack carried out by an alleged terrorist who drove a truck into crowds of people.

President Erdoğan condemned the brutal attack in a statement released by the Presidency:

"I strongly condemn the inhumane act which took place during the celebration of national holidays in Nice," President Erdoğan said, and offered condolences.

In the statement, Erdoğan said that Turkey understands the feelings of the French people, as a country which has also suffered from terrorist attacks and added that it is once again evident that it is necessary to fight terrorism in a determined manner.

"I strongly condemn the cowardly terrorist attack that bloodied Nice on the national holiday," PM said in French.

"Turkey is always with the states of the world in the international fight against terrorism and also shares the pain of the French people," he added.

U.S. President Barack Obama condemned what he said "appears to be a horrific terrorist attack" in Nice.

"Our thoughts and prayers are with the families and other loved-ones of those killed."

Noting that the attack occurred on Bastille Day, Obama praised "the extraordinary resilience and democratic values that have made France an inspiration to the entire world."

Secretary of State John Kerry called it a "horrendous attack in Nice. ... I was proud to stand alongside French leaders earlier today at Bastille Day celebrations in Paris, and the United States will continue to stand firmly with the French people during this time of tragedy."

Both presidential candidates also condemned the attacks, with Republican Donald Trump declaring "this is war" and Democrat Hillary Clinton vowing "we will not be intimidated."

Clinton said that "every American stands in strong solidarity with the people of France, and we say with one voice: We will not be intimidated. We will never allow terrorists to undermine the egalitarian and democratic values that underpin our very way of life."

Trump, who postponed plans to announce his vice presidential pick because of the attacks, said "this is war. If you look at it, this is war coming from all different parts. And frankly it's war and we're dealing with people without uniforms."

Canadian Prime Minister Justin Trudeau wrote on Twitter: "Canadians are shocked by tonight's attack in Nice. Our sympathy is with the victims, and our solidarity with the French people."

European Council president Donald Tusk expressed consternation that France was attacked on its national day and said the world stands united with the French people.

"It is a tragic paradox that the victims of the attack people celebrating liberty, quality and fraternity. We will stand united with the families of victims, the French people and the government in the fight against violence and hatred," Tusk said at a meeting of Asian and European leaders in the Mongolian capital of Ulaanbaatar.

Chinese Premier Li Keqiang said "we strongly condemn terrorism of all forms. We express our condolences to the victims and we will fight all kinds of terrorism."

Belgian Foreign Minister Didier Reynders expressed dismay that France was once again the target of an apparent terrorist attack.

"It has shocked France, it has rocked it to its core," Bishop told reporters in the Western Australia capital of Perth. "This should have been a time of great national pride and celebration."

Bishop condemned the violence, saying it was a reminder that "no country is immune from terrorist attacks."

"We support our friends and partners in France and we join with others around the world in hoping that this will be the end of this type of horrific incident that is targeted at unarmed civilians," she said.

"We are very sorry and very much with the French people and the French government," he said in at a meeting of Asian and European leaders in the Mongolian capital of Ulaanbaatar.

In Estonia, Prime Minister Taavi Roivs condemned "a terrible attack on innocent people celebrating their national day. Today, we all stand together with the French people."

At least 80 people died and 100 others were injured in Nice, France Thursday as a truck plowed into the Bastille celebrations in a possible terror attack.

Firearms and grenades were found inside the truck as anti-terrorist investigators took over the Nice attack probe.