France calls up reserves to boost security after Nice attack 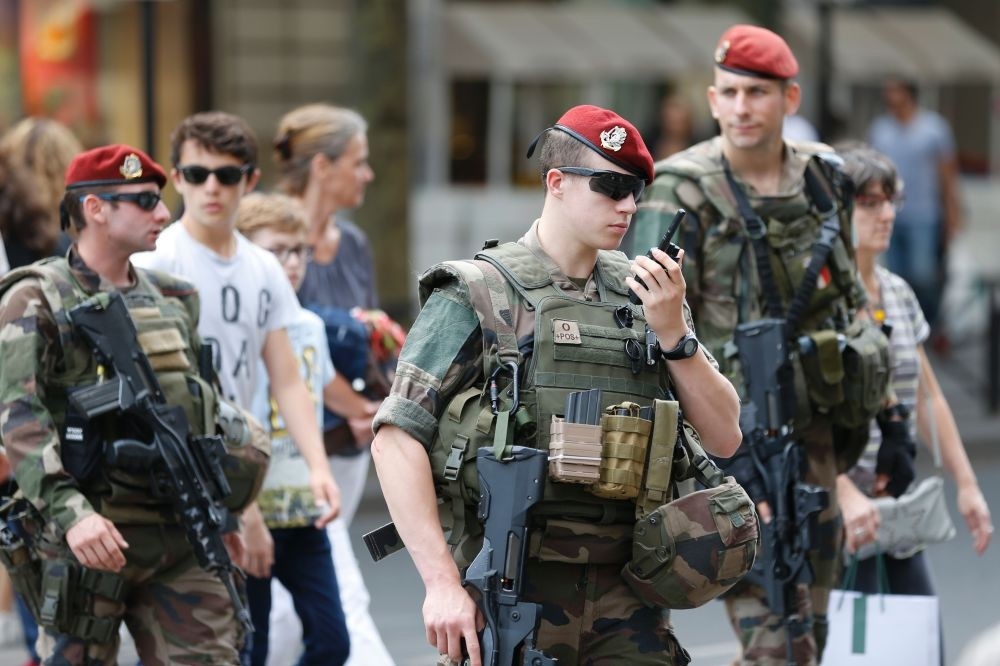 Facing heavy criticism, the French government called on young citizens to become reservists and help boost security forces in the wake of the latest terrorist attack. France has been under a state of emergency since early last year

Seeking to quell fear and criticism, the French government called up thousands of police reserves Saturday to increase security around the country, after DAESH claimed responsibility for a beachfront Bastille Day attack that security forces failed to thwart.

From the Nice seashore to the seat of French politics in Paris, critics lashed out Saturday at President François Hollande's Socialist government, asking how a country still under a state of emergency after previous carnage from extremist attacks could have let this happen again.

As Nice's coastal promenade along the Mediterranean Sea reopened, tourists and residents paid tribute to the 84 people killed and the 200 wounded in Thursday night's attack, their blood still jarringly visible on the pavement. The solemnity was only punctured when a pair of plainclothes police officers tried to drive through the crowd, prompting angry shouts of "Shame!" The officers backed away after a brief standoff.

Hollande held an emergency security meeting Saturday, and late in the day Interior Minister Bernard Cazeneuve announced he would call up 12,000 police reserves in addition to more than 120,000 police and soldiers already deployed around the country "because of the terrorist threat."

Defense Minister Jean-Yves Le Drian said a special terrorism vigilance force created after the 2015 attacks will be extended through the summer, with more deployments outside Paris and more attention to tourist sites and crowded events.

The investigation, meanwhile, focused on attacker Mohamed Lahouaiej Bouhlel, a 31-year-old Tunisian who had lived in Nice for several years, and whether he acted alone while driving a truck through the holiday crowd. He was shot dead by police Thursday night – and witnesses who saw him said he appeared determined to kill as many people as possible. DAESH said Saturday that the attacker was one of its "soldiers," the first claim of responsibility. It didn't name Bouhlel, but the statement, quoting an DAESH security member, said he was following DAESH calls to target citizens of the countries fighting the extremists.

The veracity of the group's claim couldn't immediately be determined, but French officials didn't dispute it.

What is known publicly about Bouhlel so far suggests a troubled, angry, sometimes violent man. Neighbors described the father of three as a volatile man, prone to drinking and womanizing, who was in the process of getting a divorce. His own father, in Tunisia, said his son did not pray or fast for Ramadan, the Muslim holy month. But in a statement to reporters, Cazeneuve hinted that Bouhlel may have had a last-minute adoption of a more extremist worldview. "It seems he was radicalized very quickly," he said.

French authorities detained two more people Sunday in the investigation into the Bastille Day truck attack. A man and a woman were detained Sunday morning in Nice, according to an official with the Paris prosecutor's office, which oversees national terrorism investigations. The official provided no details on their identities, and said five people detained previously remain in custody.

Neighbors told The Associated Press that Bouhlel's estranged wife was one of them.

As France began three days of national mourning Saturday, Nice's seaside Promenade des Anglais slowly and painfully came back to life. A makeshift memorial of bouquets, candles and messages was set up near one end of the expansive avenue.

Two days after the atrocity, some families were still hunting for missing loved ones, going from hospital to hospital to find relatives who had disappeared in the bloody chaos of the truck's rampage.

Officials said 202 people had been wounded in the attack, including many children. The local children's hospital said of the 30 minors brought for treatment after the attack, two had died, one was in critical condition, and three were on artificial respiration.

The dead included six of seven members of one extended family – three generations – from northeastern France who had gathered in Nice to celebrate Bastille Day and each other's company. The grandson, one of the dead, was a high school teacher at Lycee de Recollets. "The large Recollets family has just lost one of its own," the school said. "We join the family in their enormous pain and distress." In an open letter, regional council President Christian Estrosi — a member of France's opposition Republicans – described the country's current Socialist leadership as "incapable." He said he had asked for police to be reinforced in Nice ahead of the fireworks display but was told there was no need.

The Nice regional administration defended its security measures, but acknowledged that the truck driver was able to barrel past a barricade of police vehicles by simply driving onto a sidewalk. Government spokesman Stephane Le Foll warned against attempts to divide the country, calling for "unity and cohesion." Still, the message was heard, prompting the security announcement later from Cazeneuve.

France is facing a general election next year, and the deeply unpopular Hollande is facing multiple challengers, from within his own Socialist Party, from the right-wing Republicans and from the far-right National Front.

Following the attack, Hollande announced he would extend France's state of emergency for three months in the wake of this latest attack and "step up" the government's action against terrorists in Syria and Iraq. "We will continue striking those who attack us on our own soil," he said, in reference to DAESH.

France has been under a state of emergency ever since the Nov. 13, 2015 carnage in Paris, which came after 17 were killed in previous attack in January at various sites including the offices of the Charlie Hebdo magazine and a Kosher supermarket.
Last Update: Jul 18, 2016 3:09 am
RELATED TOPICS