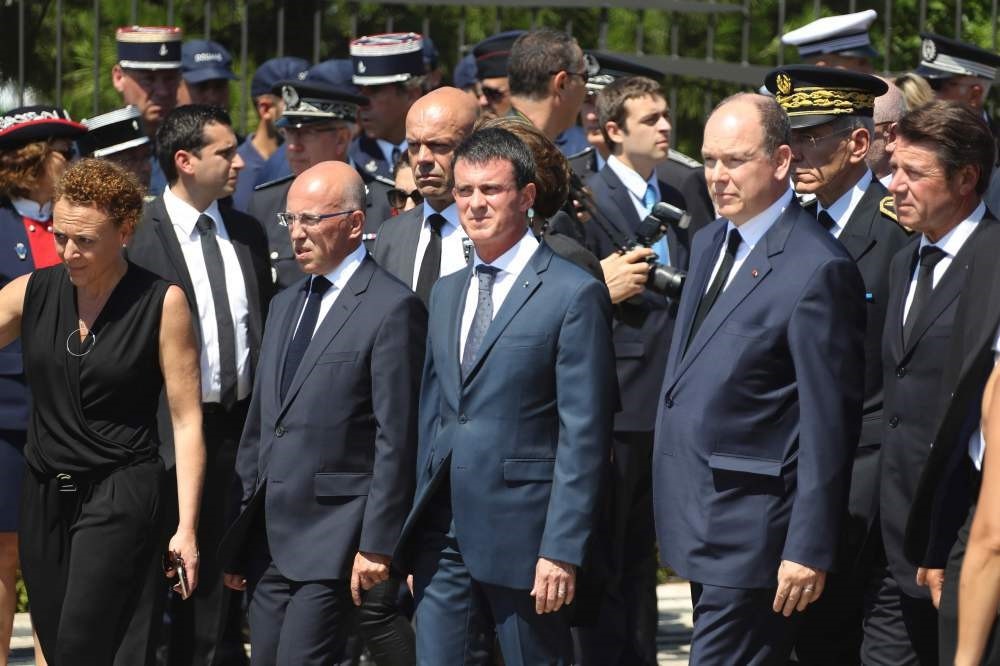 French Prime Minister Manuel Valls (C) arrives to attend a minute silence in Nice in tribute to the victims of the deadly attack on Bastille day.
by Jul 19, 2016 12:00 am

Huge crowds gathered Monday to remember the victims of the deadly Bastille Day attack. French Prime Minister Manuel Valls was booed by the crowd in Nice, as opposition accused the government of not doing enough to prevent the attack

France fell silent Monday for the victims of the Nice truck attack, but the mourning was overshadowed by politicians tearing into each other over the massacre.

A sea of people thronged the Nice promenade for the emotional minute of silence just days after a Tunisian attacker drove a truck into a crowd at the same place on Bastille Day, killing 84 people and injuring around 300. Similar gatherings were held across the country, with a minute's silence accompanied by the ringing of church bells.

Prime Minister Manual Valls was booed and faced shouts of "resign" as he arrived and left the seaside promenade in Nice, in a sign of the anger and bitterness gripping France after its third major terror attack in 18 months.

He defended government efforts to halt terrorist attacks, calling for "dignity and truth" from fiercely critical opposition politicians as the national mood soured further nine months ahead of a presidential election.

France was wrapping up a three-day period of national mourning after Lahouaiej-Bouhlel zigzagged a 19-ton truck through a crowd of tourists, locals and families enjoying a fireworks display in the Riviera city of Nice on Bastille Day. "We must not move on too quickly. We need to exorcise our demons, to talk about it, to gather together," said Philippe Gambino, who has visited the Promenade des Anglais every day since the attack, where candles and flowers form a makeshift memorial.

The attack came eight months after DAESH extremists killed 130 people across Paris, and 18 months after three days of terror at the satirical Charlie Hebdo weekly and a Kosher supermarket, which killed 17.

Former president and main opposition leader Nicolas Sarkozy said Sunday that "everything that should have been done the past 18 months was not done. … We are at war, outright war. So I will use strong words: It will be us or them."

While previous attacks saw grand displays of national unity, there was no semblance of cohesion after the Nice massacre, with Sarkozy joining a long line of opposition politicians who have accused the government of not doing enough to protect the French. Cazeneuve described the bitter debate as "shameful." "Certain members of the political class have not respected the mourning period," he said. The frustration of the French was written large in some of the messages left among flowers and tributes on Nice's seafront. "Enough with the speeches" and "Sick of carnage in our streets," the messages read. Cazeneuve sought to highlight the measures taken by the government to fight terrorism, such as boosting the armed forces and adopting new anti-terror laws, while reminding that it was under Sarkozy's government that 12,500 jobs in the security forces and intelligence were cut.

"There is no zero risk. By saying this we are telling the truth to the French and tackling the threat with lucidity," he said.

After the latest attack, the government called for volunteers to become reservists who can be called on to supplement the security forces, which are already on high alert under an eight-month-old state of emergency.

The deadly use of an easily obtainable vehicle as a weapon by a man who had no history of radicalization has highlighted the challenge for intelligence and security officials in stopping such attacks. "We cannot exclude that an unbalanced and very violent individual" had been "through a rapid radicalization," Cazeneuve said.

As investigators piece together details about his motives and planning, it emerged that Lahouaiej-Bouhlel had used the rented truck to stake out the Nice seafront for two consecutive days before striking.

A source close to the investigation told AFP that he had also sent a text message just before the attack in which he "expresses satisfaction at having obtained a 7.65-mm pistol and discusses the supply of other weapons." He also took a selfie at the wheel of the truck in the days before the attack.

Six people were in custody on Monday including a 38-year-old Albanian suspected of providing Lahouaiej-Bouhlel with a pistol he used to fire at police during the attack. In Nice, many people were still desperately waiting for news of their loved ones.

Prosecutors said just 52 victims had been officially identified so far as they take painstaking measures to avoid errors of identification seen during the Paris attacks last November. At least 10 children were among the dead, as well as tourists from Ukraine, Switzerland, Germany, and a local Russian association said there were about 10 victims from Russia.

Eighty-five people were still being treated in hospital on Sunday, 18 of them in critical condition.
RELATED TOPICS