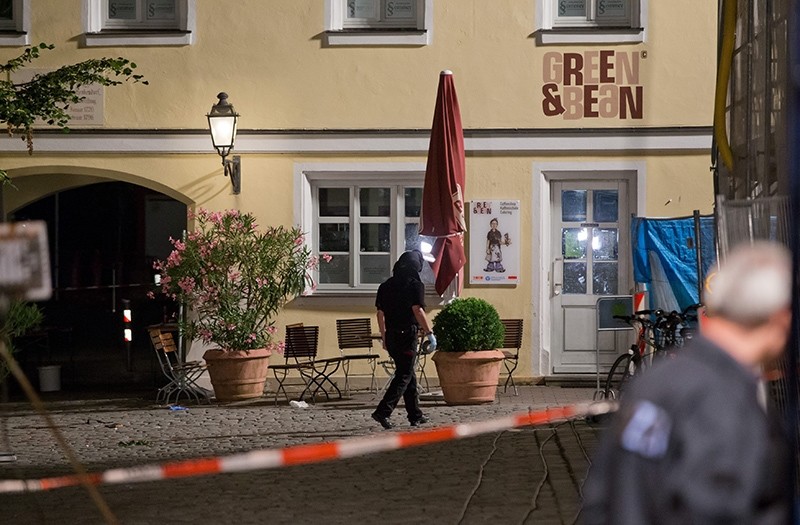 A police officer inspects the scene of an explosion in Ansbach, Germany, 25 July 2016. A man was killed and 12 others were injured in an explosion in Franconia Ansbach late on 24 July (EPA Photo)
by Compiled from Wire Services Jul 25, 2016 12:00 am
An explosion killed at least one person and injured 12 others near the German city of Nuremberg on Sunday and authorities said it was believed to be intentional.

The bombing in the Bavarian town of Ansbach was "very likely" an act of terrorism, Bavarian Interior Minister Joachim Herrmann said.

"It is my personal assessment that I unfortunately believe it very likely that a real suicide attack took place here," Herrmann told DPA early Monday.

A police spokesman said the person killed in the blast, a man with a backpack, was likely carrying an explosive device and acted alone.

The 27-year-old Syrian blew himself up after being turned away from an open-air music festival. Herrmann said the man's request for asylum was rejected a year ago, but he was allowed to remain in Germany because of the strife in Syria.

It was the fourth violent incident in Germany in a week and came as the country was still on edge after the killing of nine people by an 18-year-old Iranian-German gunman in Munich on Friday.

The blast outside a restaurant in the town Ansbach prompted the evacuation of more than 2,000 people from a nearby "Ansbach Open" music festival, police said.

"We assume it was a deliberate explosion," a Bavarian Interior Ministry spokesman said.

He said no arrests had been made in connection with the explosion but Bavarian Interior Minister Joachim Herrmann was en route to the site.

The mayor of Ansbach told reporters the blast was caused by an explosive device, according to the Nordbayern.de news website.

Earlier on Sunday, a 21-year-old Syrian refugee was arrested after killing a pregnant woman and injured two other people in the southwestern city of Reutlingen, near Stuttgart.

That attack came after a refugee from Pakistan wielding an axe injured five people near Wuerzbuerg, also in southern Germany, before he was shot dead by police on July 18.

Ansbach is home to a U.S. Army base and the 12th Combat Aviation Brigade. A spokesman at the base said the base had no information about the explosion.

There was no immediate word on possible motives for the explosion, but police said neither Sunday's machete attack nor Friday's shooting in Munich bore any sign of connections with Daesh or other militant groups.