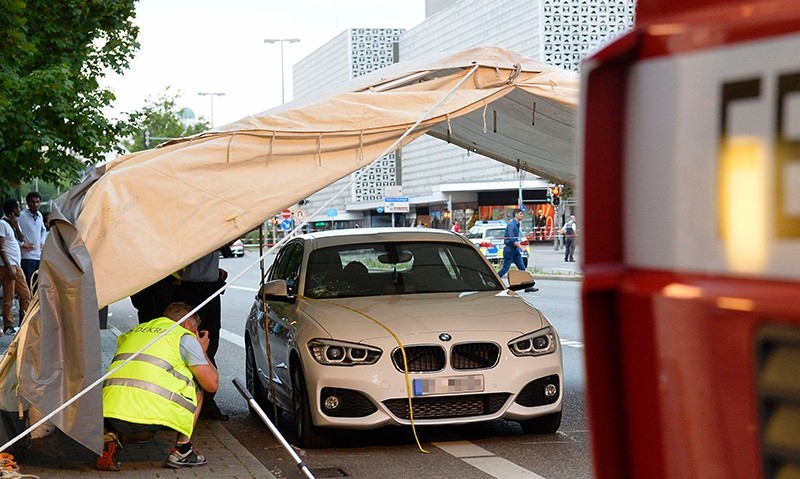 Police investigates the car which stopped the suspect who attacked people with a machete in Reutlingen, southwestern Germany, on July 24, 2016 (AFP Photo)
by Daily Sabah with Reuters Jul 25, 2016 12:00 am

A Turkish man reportedly stopped a machete wielding man on Sunday by hitting him with his car in Reutlingen city near Stuttgart, Germany.

The incident took place in front of a Turkish restaurant, where an asylum-seeking Syrian man who previously worked there, killed another employee who was reportedly pregnant.

The perpetrator of the attack reportedly attempted to flee the scene, but was stopped by Alper Meyvalı, who hit him with his car.

He had been involved in previous incidents causing injuries to other people, reports said.

This was the fourth violent assault on civilians in Western Europe in 10 days, though police said it did not appear linked to terrorism.

"Given the current evidence, there is no indication that this was a terrorist attack," a police statement said.

"The attacker was completely out of his mind. He even ran after a police car with his machete," the mass-circulation Bid newspaper quoted a witness as saying. A motorist knocked down the attacker soon afterward and he was then taken into custody by police, the witness told Bid. The police spokesman said the man was being interrogated after receiving medical treatment.

Neither Sunday's attack nor a shooting rampage by an 18-year-old Iranian-German man that killed nine people in Munich on Friday bore any sign of connections with terrorism, police said.