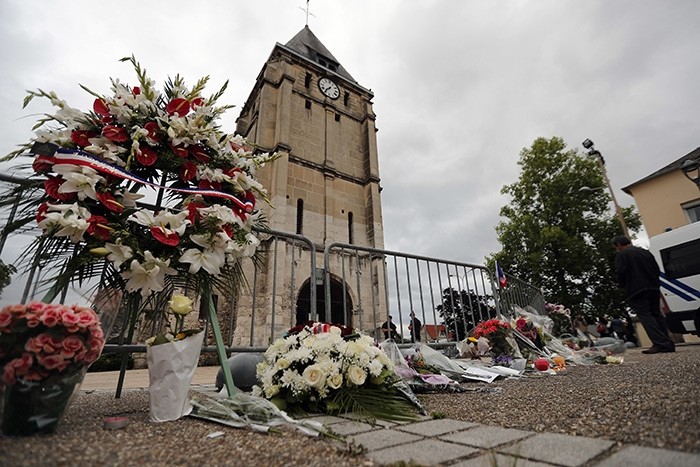 wreath of flowers from Muslim of France Associations is placed with flowers next to the church where an hostage taking left a priest dead the day before in Saint-Etienne-du-Rouvray, Normandy, France, Wednesday, July 27, 2016. (AP Photo)
by Daily Sabah with Wires Jul 28, 2016 12:00 am

France formally identified a second church attacker, previously identified by security services as a potential threat, like his accomplice. Hollande’s government faces another firestorm of criticism over alleged security failings

The second teenager involved in this week's killing of a priest in a church in France was a 19-year-old who was known to security services as a potential extremist, police and judicial sources said on Thursday.

He had tried to travel to Syria, prosecutors added, as calls mounted for the prime minister and interior minister to resign after the latest terror attack.

The prosecutor's office said that the second killer was 19-year-old Abdel Malik Petitjean, who was listed in June iin France's "S Files" of people posing a potential threat to national security, after trying to reach Syria. The government has said there are about 10,500 people with so-called "S files" related to potential extremist activities in France.

Petitjean, whose face was disfigured after a gunfight with police, was harder to identify than his accomplice Adel Kermiche, 19, and investigators confirmed his identity after a DNA match with his mother.

Three people close to Petitjean have been detained in police custody, a judicial source said. A 16-year-old, being held since Tuesday in connection with the attack, is still in custody.

The two young extremists were shown pledging allegiance to DAESH in a video sometime before they stormed a church in the northern town of Saint-Etienne-du-Rouvray on Tuesday and slit the throat of an 86-year-old priest at the altar, while nuns were forced to watch.

The attack came amid a firestorm of criticism directed at the government over alleged security failings, following a Bastille Day truck massacre two weeks ago that left 84 dead.

"If the government is not responsible for the wave of terrorism, it is guilty of not having done everything to stop it," said Laurent Wauqiez, the deputy leader of the right-wing Republicans party in an interview with Le Figaro newspaper. "Manuel Valls and Bernard Cazeneuve must go because they refuse to take vital measures to fight extremism. We need a new government, determined to act."

The French government has assured the country that everything possible is being done to protect citizens, while warning that more terror attacks are inevitable, after three major strikes and several smaller attacks over the past 18 months. As it emerged both church attackers were on the radar of intelligence services and had tried to go to Syria, more tough questions were asked over what could have been done to stop them.

Kermiche had been awaiting trial on terror charges after his second attempt to travel to Syria. He was fitted with an electronic tag – allowing him out of the house on weekday mornings – despite calls from the prosecutor for him not to be released.

Annie Geslin, who worked with Kermiche's mother for many years, told AFP "he was the youngest child and had psychological problems."

Sources close to the investigation said Petitjean "strongly resembles" a man hunted by anti-terrorism police in the days before the attack over fears he was about to carry out an act of terror.

The sources said that France's anti-terrorism police unit UCLAT sent out a note four days before the attack – saying it had received "reliable" information about a person "about to carry out an attack on national territory."

The attack is the third in two weeks in France and Germany in which extremists have pledged allegiance to the group, increasing jitters in Europe over young, often unstable men being lured by DAESH propaganda and calls to carry out attacks in their home countries.

DAESH claimed that Mohamed Lahouaiej Bouhlel, who ploughed a truck into a crowd in the French city of Nice on July 14, was one of their "soldiers," although no direct link has been found.

Yesterday, President Francois Hollande announced in a statement released by Elysee Palace that France will create a national guard to help bolster security in the wake of a series of terrorist attacks.

The president said he had decided to form a national guard based on existing operational reserve forces, with the aim of creating a body "in the service of the protection of the French." He added that the country's defense council would be convened at the beginning of August, followed by consultations with parliamentary commissions in September, with the aim of starting operation of the guard "as fast as possible." France had a national guard from 1789 to 1872 which was separate from the army, and whose members played an important role in the country's revolutions.

French government has also been under pressure for pushing for controversial labor reforms, which sparked violent street protests and strikes for weeks.