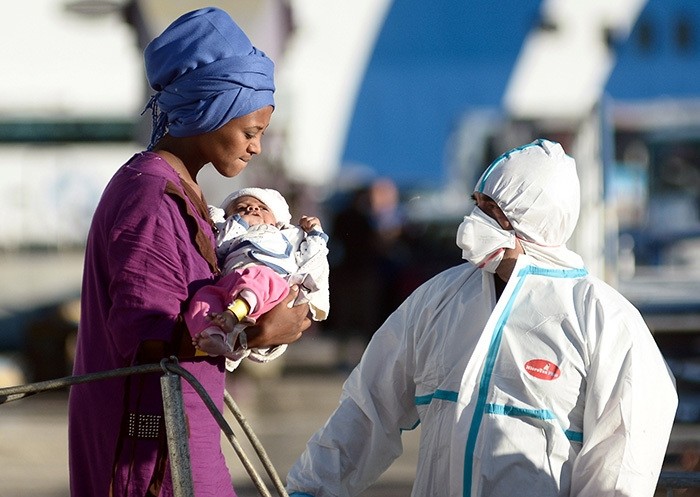 A woman holds a child after disembarking from the Italian Navy ship Borsini in the Sicilian harbour of Palermo, southern Italy, 20 July, 2016. (Reuters Photo)
by German Press Agency - DPA Jul 29, 2016 12:00 am

The rescue of 603 migrants is under way in the Mediterranean Sea between Sicily and North Africa, the Italian navy said in a Friday statement.

With the onset of warmer summer weather, migrant arrivals to Italy have intensified. On Thursday, 1,095 people were rescued at sea, the Italian coastguard wrote on Twitter.

In Brussels, the European Union's executive, the European Commission, granted more aid to Italy and Greece - the other country where Europe-bound sea migrants often first land - to deal with the influx.

Greece was awarded 7.3 million euros (8.1 million dollars) for reception and medical services in the Aegean islands, and 500,000 euros to upgrade water and sewage systems in Samos' migrant centre.

Italy got 2.2 million euros for its coastguard to provide food to rescued migrants and cover personnel costs, and 1 million euros to kit its navy with clothing and equipment to perform medical checks.

More than 251,000 people have arrived to Europe by sea in the year to date, including 161,729 to Greece and 89,062 to Italy, and more than 3,000 have died or gone missing in the Mediterranean, according to the International Organization for Migration.