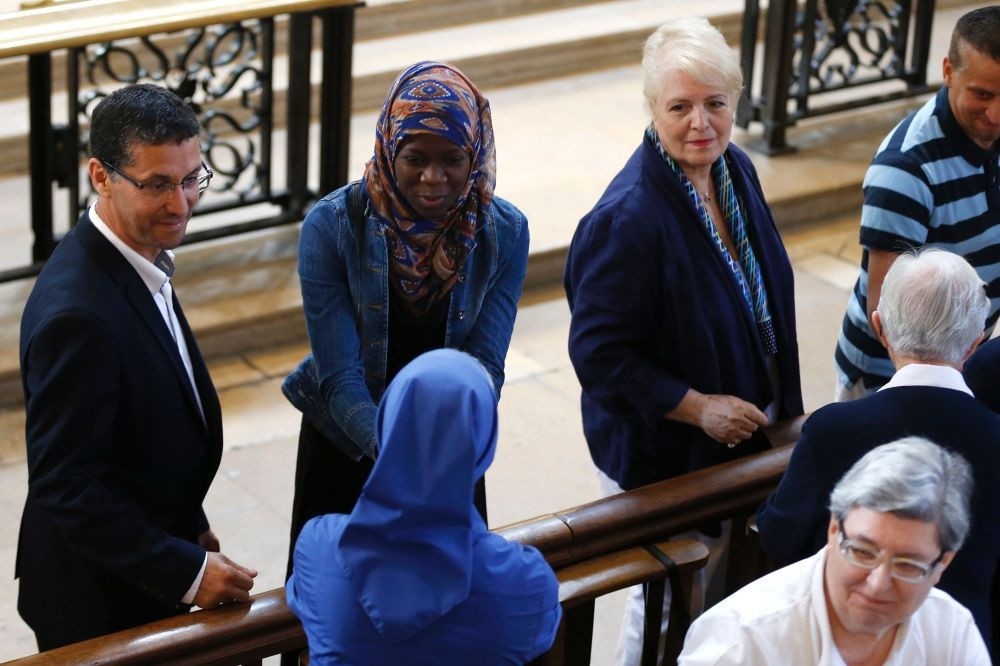 A Muslim woman shakes hands with a nun during a Mass in tribute to slain priest Jacques Hamel in the Rouen Cathedral, July 31.
by Daily Sabah with AFP Aug 01, 2016 12:00 am

Muslim and Christian groups gathered to mourn a French priest killed by terrorists in Normandy on Saturday. Prominent Muslim groups and residents condemned the terrorists and joined in a ‘brotherhood march' with Christian groups in the southeastern city of Lyon

Muslim and Christian groups gathered on Saturday to mourn a French priest murdered by terrorists, as authorities charged a man in connection with the brutal church attack that rocked the nation.

A shell-shocked France is still coming to terms with the killing of the clergyman by terrorists in his church on Tuesday, sparking fears of tensions between religious communities in the secular nation.

In a bid to forge togetherness between religious communities, a "brotherhood march" was held in the southeastern city of Lyon, supported by a regional Muslim council and a Catholic group. Hundreds of people marched in silence, while mourners at the front of the crowd carried banners that read: "This is not a religious war" and "We are all brothers and sisters."

A statement from Abdelkader Bendidi, who heads the regional Muslim council, read: "We think it is crucial to leave no room for resignation, resentment or fear, and to take a stand for togetherness."

Azzedine Gaci, a local imam, said "Let's not give the agents of terror a second victory by giving in to hate."

Foucauld Giuliani, a member of a Catholic group, said: "It doesn't matter what our religious beliefs are, or whether we have none at all. These attacks won't divide us. Instead, they will unite us around one idea: reconciliation."

In the southwestern city of Bordeaux, some 400 people attended a vigil for the 85-year-old priest Jacques Hamel, whose throat was slit by DAESH-inspired teenaged attackers. Prayers were held in the Saint-Etienne church, where the killing took place as Hamel was celebrating mass on Tuesday. Among the 300 people who attended the evening mass in northern Saint-Etienne-du-Rouvray, around 50 were Muslims. Police were still trying to piece together links to the two 19-year-olds who carried out the attack – Adel Kermiche and Abdel Malik Petitjean – both of whom were on the radar of intelligence services after attempts to go to Syria.

On Friday, authorities filed charges against a 19-year-old man accused of "criminal conspiracy with terrorists," after police discovered a mobile phone video of one of the assailants at his home. Police were still questioning Petitjean's cousin and a Syrian refugee, after a photocopy of his passport was found at Kermiche's house.

A third suspect, a 16-year-old, was released but could ultimately face a separate investigation for possession of extremist propaganda, authorities added.

Valls has said he would consider a temporary ban on foreign financing of mosques, urging a "new model" for relations with Islam after a spate of extremist attacks. France has just over 2,000 mosques, serving one of Europe's largest Muslim populations.

Harrowing details have emerged about the assault in the church, as well as a chilling warning from one of the attackers. On Friday, L'Express magazine revealed that Kermiche had described the modus operandi of the attack through the encrypted messaging app Telegram.

"You take a knife, you go into a church. Bam!" says the message, recorded just a few days before the attack.

Two elderly nuns who were in the church at the time of the attack told AFP the assailants "smiled" and spoke about peace.

Sister Helena said that when the attackers asked whether she was familiar with the Quran, she said she had read several surahs, especially those about peace. Helena reported that one of the attackers replied: "Peace is what we want... as long as there are bombs on Syria, we will continue our attacks. And they will happen every day. When you stop, we will stop."

After the attack, a senior Turkish official, speaking anonymously due to restrictions on speaking to media, told Daily Sabah on Thursday that Turkey had deported the attacker and subsequently notified French authorities.

The source said that Turkey was informed by French authorities on May 12, 2015 that Adel Kermiche intended to travel from Geneva to Istanbul Sabiha Gökçen Airport (SAW) under the name "Kevin Kermiche." Upon examination by terrorist profilers stationed at the airport, Kermiche was denied entry and deported to Geneva on May 14, 2015. The French authorities were immediately informed about Kermiche's deportation. The Turkish official said, "According to our records, he was sent from Switzerland to France on May 21, 2015." On 26 May 2015, Interpol dropped the search warrant for Adel Kermiche.
Last Update: Aug 01, 2016 1:20 am
RELATED TOPICS