Muslims in France step out of invisibility to combat terrorists 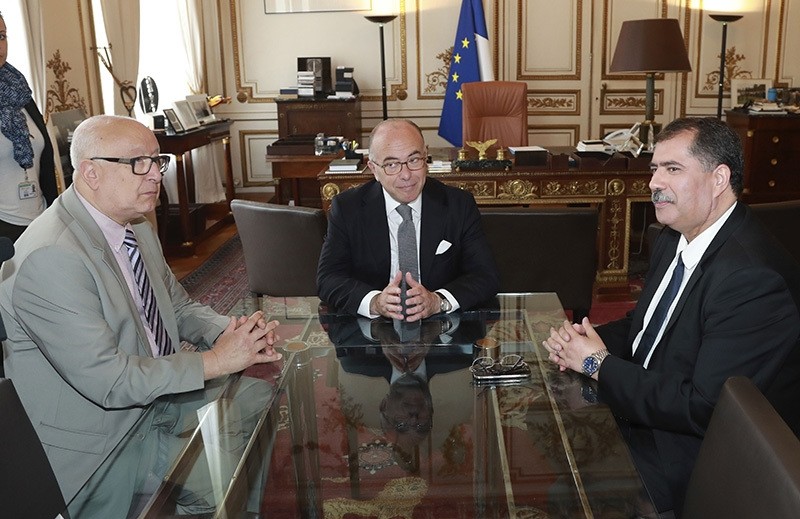 France's Minister of the Interior Bernard Cazeneuve (C) meets with Vice President of the French Muslim council CFCM Abdallah Zekri (L) and CFCM Head Anouar Kbibech (R) at the Ministry of the Interior on August 1, 2016 (AFP Photo)
by Associated Press
Aug 02, 2016 12:00 am

French Muslims have been officially invisible, expected to blend in with the rest of the citizenry in secular France. But now they are speaking out — and being called on to take a larger role in combatting the threat from terrorists.

The killing of a priest last week at the altar of his Normandy church by two 19-year-old terrorists has become a lightning rod for change.

In an unusual joint statement published Sunday, a group of more than 40 Muslim lawyers, doctors and other professionals said that French Muslims must move from the shadows to front and center, and take action because those representing Islam have lost touch with the young.

"We were silent because we learned that in France religion is a private affair," the signers wrote, referring to the secular values France prizes and the French model of integration by which citizens forego their cultures of origin for Frenchness. "Now we must speak because Islam has become a public affair and the current situation is intolerable."

The signers said Muslim leaders are unable to reach out, let alone represent, a younger generation of Muslims — some of them "the prey of terrorist ideologues."

France's strict brand of secularism was behind two laws to ban Muslim apparel — headscarves in classrooms in 2004 and face-covering veils in streets, in 2010. It has also meant French authorities normally communicate only with Muslim leaders through the French Council for the Muslim Faith, or CFCM — an umbrella group the government helped set up in 2003 as conduit for dialogue with a religion that, unlike Catholicism, has no hierarchy.

But now, even the government is reaching beyond Muslim officialdom to implore citizens of the Islamic faith to join in the battle for hearts and minds against terrorists.

"The most important challenge is not that of institutions. It is that of our citizens of the Muslim faith who in their families, their neighborhoods, must feel concerned and take their responsibility in hand," Prime Minister Manuel Valls said in an interview Tuesday with the daily Liberation.

In an exceptional reach-out, he said that "Islam of France" must be rebuilt, expanding training for imams and reducing foreign financing of mosques.

"Muslims have an immense responsibility" helping the state "combat those who put into question our public freedoms," he said.

With an estimated five million Muslims in France — the largest Muslim population in western Europe — Islam is the country's second religion after Roman Catholicism. But previous attacks elicited little more than communiques from the main Muslim organizations deploring the horrors — and recrimination from some quarters because Muslims weren't strongly denouncing the acts of the terrorists.

Raphael Liogier, an expert on Islam at the prestigious Science Po university in Aix-en-Provence, says signs that Muslims are stepping into the fray may be the start of real change.

"They are under two injunctions: be quiet and at the same time take a position," Liogier said. "If they say nothing, one thinks they have accepted the attacks ... Today, they consider that this double injunction is no longer manageable."

The turning point appears to have come with the slaying of Rev. Jacques Hamel and the attack in the Riviera city of Nice, less than two weeks earlier, where 84 revelers were killed by a huge truck that mowed down crowds on Bastille Day on a famed beachside avenue closed for a fireworks display.

Both attacks were claimed by Daesh terrorists — like the killing of a police couple in their home in June and two waves of attacks in Paris last year that killed 147. Yet, like in some other cases, the Tunisian attacker in Nice had not shown signs of being a practicing Muslim.

Mohammed Karabila, president of the Muslim cultural center in Saint-Etienne-du-Rouvray, where the priest was killed, said the two attacks "made us understand."

A symbol of the state and a symbol of religion were hit, he said by telephone. "The message is clear. They (Daesh) want to fracture us, fracture French society."

Since its creation in 2003, the CFCM has been the main Muslim voice for the public, as well as the government, but it is an often fractious group of various Muslim currents in France that are influenced, and partly financed, by countries where each group has its roots.

Valls and Interior Minister Bernard Cazeneuve are making plans to revamp what authorities have tried for decades to build: an "Islam of France" specific to French Muslims. As part of the initiative, they want to revive a foundation that could provide private funds for mosques and make foreign funding visible. They also want a single cursus for the training of imams.

"Our country must show the entire world that Islam ... is compatible with democracy," Valls said in his Sunday commentary.

Liogier, meanwhile, predicts Muslims will increasingly speak out — but with potential risk to themselves since "they are the target par excellence" of Daesh, which views Muslims integrated in the West as infidels.

After the attacks, the CFCM stepped forward to call on Muslim faithful to visit churches in a sign of solidarity with Christians. Many did and Catholics also joined Muslims at Friday prayer in a local mosque.

One Muslim leader, Abdelatif Hmitou, castigated the slain attackers during the Friday prayer.

"You are not a part of civilization," he said — bold words given the omnipresent worry among Muslims that Islam is being tainted by the actions of extremists.

Celebrating the funeral Mass on Tuesday for the slain priest, the Archbishop of Rouen, Dominique Lebrun, said that it had been "an error" to keep religion private. During the ceremony, he invited Muslims to return to churches on Aug. 15, the Catholic feast of the Assumption.