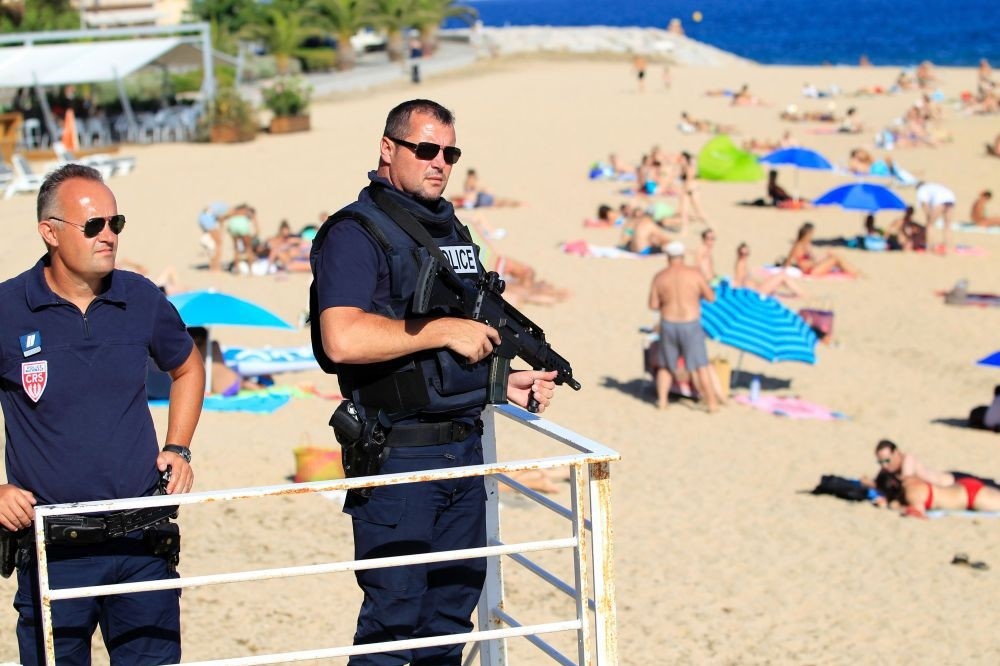 French police patrol a beach in Ajaccio on the French Mediterranean island of Corsica, Aug. 1.
by Daily Sabah with AFP Aug 05, 2016 12:00 am

France's tourism industry, which has already been battered by violent street protests and a spate of terrorist attacks, took a further hit in late July after another attack struck the city of Nice, which is usually a major summer draw

With every new terror attack, French citizens stoically declare that "life goes on," but despite this show of defiance, a creeping anxiety, which has also hit tourism across the country, has taken hold of society.

France's already-battered tourism industry took a further hit in late July during what should have been the height of the season, as foreign visitors stayed away after 84 people were killed in Nice on Bastille Day.

In the week following the July 14 attack on Nice's Promenade des Anglais boulevard along the Riviera, arrivals by air slumped 8.8 percent when compared to the same period in 2015, according to data from ForwardKeys, which daily sifts through more than 14 million air travel transactions.

The sector has been struggling for months, not least since the November 13 attacks in and around Paris which claimed 130 lives. Arrivals to France by air between January and July 10 were down 5.8 percent, and to Paris down 11 percent. Flight reservations to France were down 20 percent following the Nice attack.

France is the world's top tourist destination and the tourism sector accounts for around nine percent of GDP. France had hoped the Euro 2016 football championships would give tourism a shot in the arm – but this has been disappointed.

People living in France are also feeling the strain after a string of terror attacks over the past 18 months. "There is a cumulative effect. At first (a terror attack) is an unexpected event, but now we are in a situation where we fear it happening again," said Evelyne Josse, a Belgium-based psychologist and trauma expert.

Users of a popular French online medical forum describe panic attacks on the metro, being paralyzed with fear at the prospect of taking trains to go on holiday or going to the beach, with one woman writing she feels that going out in a crowd is like playing Russian Roulette.

"The anxiety is always there," 32-year-old Thibaut Chaize told AFP on his way to work in Paris. "We are afraid but we can't stop living," he said. "The wariness is always there. Any strange behavior on the metro or at a concert, all of that provokes a bit of fear."

The cluster of terror strikes began in January 2015, when 17 people were killed in a spree of violence in Paris, including at the Charlie Hebdo satirical magazine and a Jewish store. Then in November, when 130 people were killed at restaurants, bars and a concert hall in Paris, the reality of an ever-present danger began to set in, with government talking of "war" and citizens growing used to the sight of soldiers on the streets. In between, a foiled attack on a high-speed train in France and the Brussels metro and airport bombings only added to the list of places that could be targeted.

In July, when a man drove a massive truck into a crowd in the Riviera city of Nice, crushing 84 to death, and a priest was murdered in a church in Normandy, it became clear that terror went beyond big cities.

"I phoned my son during the Paris attacks. Now it is he who called me, 'Dad are you ok?' You never know, it can happen anywhere," said Eric Lecornu, 57, from Saint-Etienne-du-Rouvray where the priest was killed last week.

The Cote d'Azur area around Nice, usually a major summer draw, saw hotel occupancy rates fall between five and 10 percent through to latest figures running to last week. And in Paris, the main hoteliers' union UMIH expects a fall of nearer 20 percent, hitting restaurants as well as hotels. Other regions have also been hit, including Normandy, where a priest was killed by two jihadists last Tuesday.

Summer, when the French decamp en masse on holiday, has been also hit by the cancellation of several festivities, from stargazing to fireworks shows as well as a perfume festival. But the government has taken pains to note that most events were going forward, some drawing bigger crowds than usual, while cancellations have concerned events where security could not be ensured.

Beloved Parisian summer activities such as an open-air cinema festival have been moved indoors, while police on horseback are a common sight and a "beach" set up along the Seine River is patrolled by gun-wielding soldiers. On beaches in Saint-Malo in Brittany, lifeguards have been equipped with guns.

Prior to Nice, July had been looking strong but "the July 14 attack brusquely pushed us down five percent," says Alain de Mendonca, chairman of travel firm Karavel-Promovacances, adding that "people are afraid to go to the airport, to take a plane."

The French government has also been under pressure over alleged security failings, following the truck massacre in Nice on Bastille Day. After the latest attack, in which two terrorists killed an 86-year-old priest in a church in northern town of Saint-Etienne-du-Rouvray in Normandy region, a senior Turkish official speaking to Daily Sabah said that Turkey deported and subsequently notified the French authorities about the man who attacked the church in Normandy.
Last Update: Aug 05, 2016 1:02 am
RELATED TOPICS