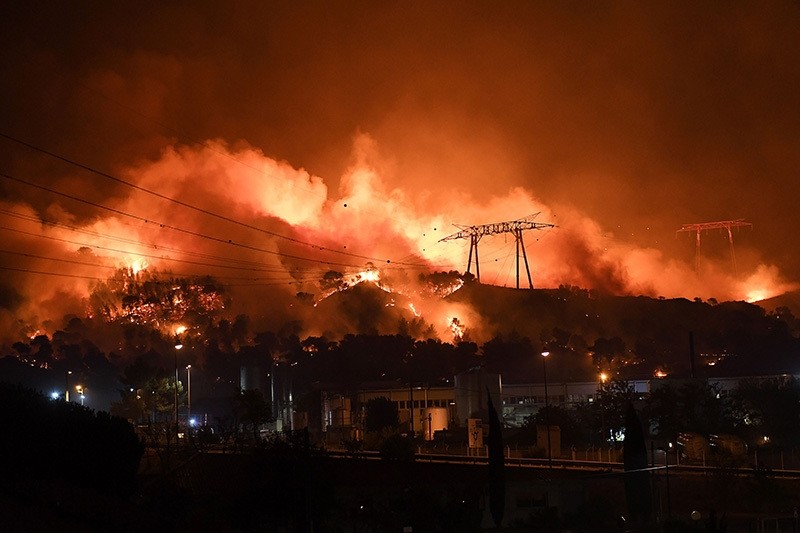 France mobilized 1,500 firefighters August 10, 2016 to deal with wildfires in the countryside north of Marseille that have gutted buildings and forced more than 1,000 people to flee their homes. (AFP Photo)
by Associated Press Aug 11, 2016 12:00 am

Fires whipped by high winds ravaged swaths of southern France and Portugal on Wednesday, killing at least four people, burning scores of homes and forcing the evacuation of thousands, including tourists.

In France, multiple fires formed a column marching toward the Mediterranean port city of Marseille. Hundreds of miles away, a fire swept overnight into Funchal, the capital of Portugal's Madeira Islands, killing three elderly people and leaving more than 300 with minor burns and smoke inhalation. A forest watchman was killed on the mainland during the night when one of more than 100 blazes engulfed the caravan he was sleeping in 150 kilometers (95 miles) north of Lisbon.

Two people were reported injured, one seriously, as the fire in southern France moved toward Marseille, firefighters said, and 20 to 25 homes were burned. At least 2,700 hectares (6,670 acres) of land were devastated. Four firefighters were injured, three seriously, battling a separate blaze in the nearby Herault region — brought under control like a fire in an industrial area outside Marseille that stocks oil and petrochemicals.

The Marseille airport rerouted incoming flights to make way for firefighting aircraft, while officials in Marseille, France's second-largest city, were bracing for flames that risked lapping at its doors, and the airport warned flights risk delays or cancellations Thursday.

Thick layers of ochre-colored smoke dimmed the afternoon skies of sun-drenched Marseille, while black plumes rose above Vitrolles and Pennes-Mirabeau.

"It was a scene really like the end of the world," Caroline Vidal, a Vitrolles resident told iTele TV, describing the scene as she fled her home to her grandmother's house and saw people running on the highway to escape.

Assistant Prefect Yves Rousset, asked at a pre-dawn meeting with reporters in Marseille, whether the fire might reach France's second-largest city overnight, said, "We can never say there will be no risk, but we're doing everything so it doesn't." Firefighting aircraft were restarting duty at daybreak, while the battle continued on the ground.

Firefighters in both countries battled multiple blazes fanned by high winds and fed by brush in a hot, dry summer, considered fire season in both countries. A full 186 wildfires were counted Wednesday on Portugal's mainland.

But the blazes were exceptionally powerful in both countries, roaring through Madeira and southern France at the height of the tourist season — a mainstay of the economy of Madeira islands, off northwest Africa.

Portugal's National Civil Protection Service reported 14 major wildfires burning out of control in mainland Portugal where almost 4,500 firefighters were in action in a massive operation, supported by 28 water-dumping aircraft and 1,300 vehicles. Desperate, the government requested help from other European Union countries.

The Madeira fire forced the evacuation of more than 1,000 residents and tourists in the islands. Residents described chaotic nighttime scenes, with people fleeing the flames by car at high speed on the wrong side of the road.

Miguel Albuquerque, head of Madeira's regional government, told reporters the three local victims died in their burned homes early Wednesday as the wildfire hit the coastal city in the dark. He said two other people were seriously hurt and one person went missing. At least 37 houses and a five-star hotel had burned down.

In southern France, more than 1,000 people were evacuated in several towns, notably Vitrolles, about 25 kilometers (15 miles) north of Marseille where some homes were burned down, and in nearby Pennes-Mirabeau.

"The fire is progressing. It's progressing fast," Deputy Marseille Mayor Julien Ruas said on BFM-TV. He said firewalls had been set up on the corridor leading toward the city, but if the fire passed those "it will move toward the northern neighborhoods of Marseille."

"The fire is extremely powerful, fast, explosive, and continues burning everything in its path," firefighters said in a statement from a temporary headquarters set up in Vitrolles.

The origins of the French fires, which started in Rognac, north of Vitrolles, were unknown.

The Madeira blaze broke out Monday and firefighters said the island's steep hills and dense woodland made it hard to reach the flames. Albuquerque, the regional government chief, said officials suspect that fire was started deliberately and police have made two arrests.