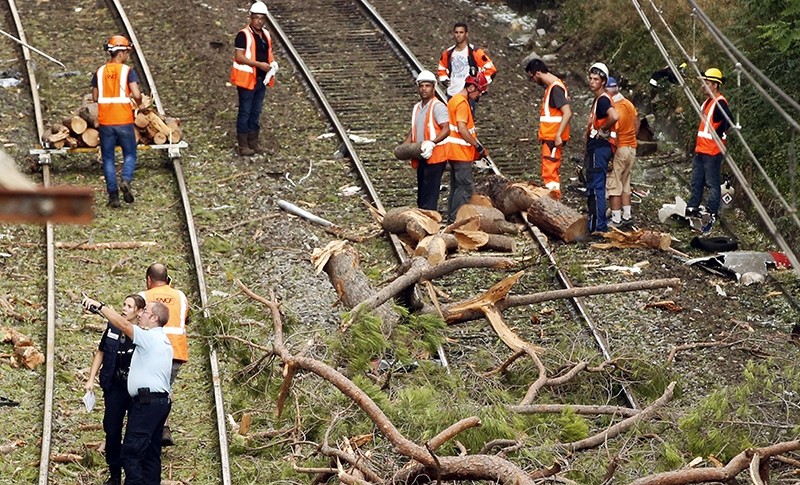 Railroad workers and French police officers clean the rails near Saint-Aunes in the South of France, 17 August 2016 (EPA Photo)
by Associated Press Aug 17, 2016 12:00 am

A regional train hit a tree that had fallen on the tracks in a rural area of southeast France on Wednesday, injuring six people, one of them seriously, rail and local authorities said.

A spokeswoman for the local prefecture in the Herault region said that the accident happened following an afternoon hail storm between the towns of Saint-Aunes and Lunel, near the southeastern city of Montpellier. The train did not derail.

The spokeswoman, who spoke on condition of anonymity to comply with regional rules, said the seriously injured person was evacuated by helicopter. Other passengers were taken to a community center in Saint-Aunes.

The national rail operator, SNCF, tweeted that one person was seriously injured and five others were lightly wounded.

The prefecture spokeswoman said rescue workers helped evacuate passengers and local train traffic was stopped between the cities of Montpellier and Nimes.

Following the accident, two other trains were stopped in the region, including one that was traveling from Paris to Montpellier, the prefecture said in a statement. The stranded passengers were given drinks and food by SNCF teams, and Red Cross rescuers were dispatched to assist them if needed, it said.

A replacement bus service was set up between cities and main towns in the region during the busy summer travel period.