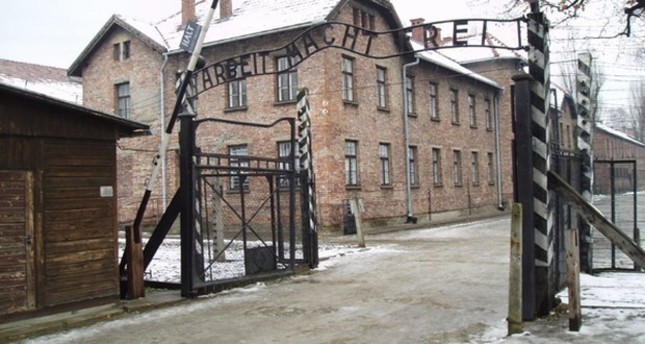 The famous ,Work sets you free, sign is seen at the entrance of the Auschwitz concentration camp where Jews were tortured and killed by the Nazi Germany.
by Associated Press Aug 17, 2016 12:00 am

The Polish government approved a new bill on Tuesday that foresees prison terms of up to three years for anyone who uses phrases like "Polish death camps" to refer to Auschwitz and other camps that Nazi Germany operated in occupied Poland during World War II.

The bill aims to deal with a problem the Polish government has faced for years: foreign media outlets — and even U.S. President Barack Obama — referring to the Nazi camps as "Polish."

The Justice Ministry said the Cabinet of Prime Minister Beata Szydlo approved the legislation during a weekly session on Tuesday. It is expected to pass easily in the parliament, where the nationalistic right-wing ruling Law and Justice party enjoys a majority.

Poles fear that as the war grows more distant younger generations across the world will incorrectly assume that Poles had a role in running Auschwitz, Treblinka and other German death camps, a bitter association for a nation that was occupied and subjected to brutality that left some 5.5 million Polish citizens dead during the war, about 3 million Jews and 2.5 million non-Jews.

"It wasn't our mothers, nor our fathers, who are responsible for the crimes of the Holocaust, which were committed by German and Nazi criminals on occupied Polish territory," Zbignew Ziobro, the justice minister, said Tuesday. "Our responsibility is to defend the truth and dignity of the Polish state and the Polish nation, as well as our fathers, our mothers and our grandparents."

Many Poles support such legislation and feel that it differs little from laws that some countries, including Poland and Germany, have that make Holocaust denial a crime.

However, critics note that the government will ultimately be powerless to punish people outside of Poland, those most likely to use such language. They fear its true intent is to repress historical inquiry within Poland into Polish behavior toward Jews. Though the Polish state never collaborated with the Nazis, there were some Poles who killed Jews or identified them to the Germans. That subject is anathema to the country's nationalistic leadership, which has an official "historical policy" of promoting knowledge of the heroic episodes in Poland's past.

There were also Poles who risked their lives to help Jews. The Israeli Holocaust museum Yad Vashem has recognized more than 6,000 Poles as "Righteous Among the Nations" for rescuing Jews, more than from any other country.

The bill had been under discussion for many months and originally foresaw a prison term of up to five years. The version approved Tuesday is milder. The Justice Ministry says that prison terms of up to three years would be reserved for those who intentionally slander Poland's good name by using terms like "Polish death camps" or "Polish concentration camps." Those who use such language unintentionally would face lesser punishments, including fines.