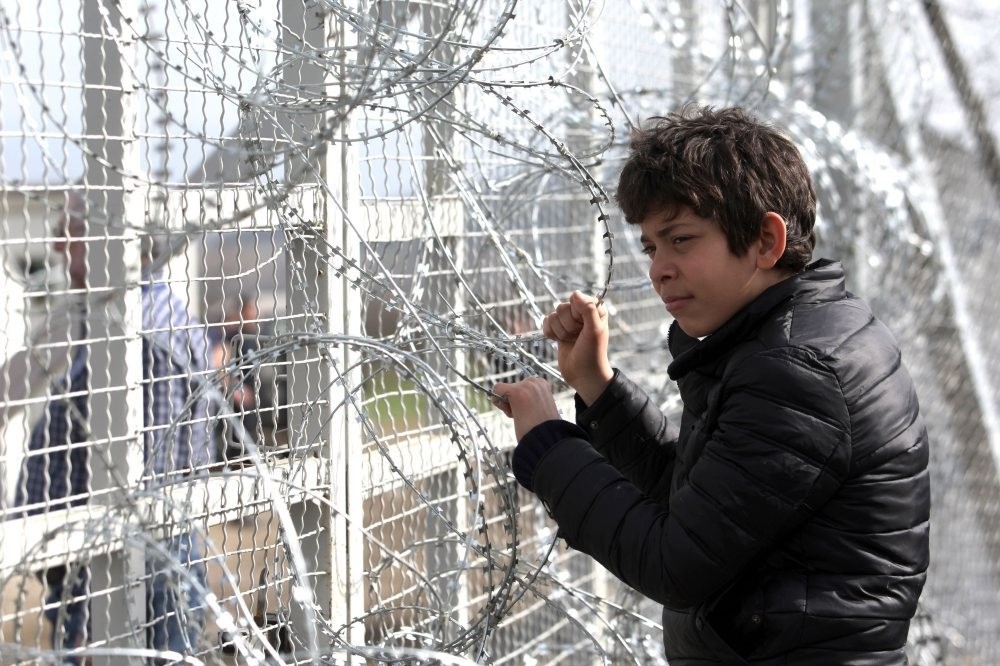 A boy looks through barbed wire as migrants wait to cross the Greek-Macedonian border near the village of Idomeni, March 1. (AFP Photo)
by Daily Sabah with Wires Aug 20, 2016 12:00 am

According to the proposal, migrants have to work between 15 and 30 hours a week and they can only get 1 euro an hour. Kurz said if anyone refuses to do this job, then they will face a reduction in the financial support the government provides. Jobs include maintenance of public places, elderly care and positions at social facilities.

Kurz's proposal also includes sanctions for migrants if they do not attend German courses. He said he hopes they can agree on a common integration proposal with their Social Democrat Party (SDÖ) coalition partner.

Kurz also said religious symbols such as the burqa are an issue that needs to be discussed. "A full body veil is hindering integration," Kurz told broadcaster ORF, adding that the burqa is "not a religious symbol but a symbol for a counter-society." In Austria, Islam is the second most widely professed religion, practiced by 7 percent of the population, or around 600,000 people, according to the Islamic Religious Community.

The country has been spared the kind of extremist attacks suffered in Germany, France and Belgium. But fears and tensions have been growing over the past months, fueled by anti-migrant campaigns of the popular right-wing Freedom Party of Austria (FPÖ).

The head of the FPÖ, which hopes to provide the first far-right head of state in the European Union after the re-run of the presidential elections on Oct. 2, said it is time to ban the full body veil.

Meanwhile, interior ministers from German Chancellor Angela Merkel's conservative political bloc are calling for burqas to be banned in some public places and government-run buildings. On Friday, German Interior Minister Thomas de Maiziere said Merkel's conservatives have agreed that women should be banned from wearing face veil in schools and universities and while driving.

The CDU's calls for a partial ban come as it has lost support to the anti-immigrant Alternative for Germany (AfD) party, which says Islam is incompatible with the constitution and wants to ban the burqa and minarets on mosques. The AfD is expected to perform well in regional elections in Berlin and the eastern state of Mecklenburg-Vorpommern in September.

Social Democrat Party of Germany (SPD) Labor Minister Andrea Nahles has said the calls were a sign of an "increasingly xenophobic" political discourse in Germany and could be a serious setback to efforts to integrate immigrants. Justice Minister Heiko Mass, also from the SPD, said debates about the burqa and security should be kept separate. Germany has nearly 4 million Muslims, about 5 percent of the total population.

Three French Mediterranean cities have recently banned the full-body-covering Islamic burkini swimwear, saying the burkini defies French laws on secularism. France, which has the largest Muslim minority in Europe, estimated at 5 million, has banned the wearing of niqabs and burqas in public since 2010. Muslim groups have called the recent ban in France unconstitutional, divisive and Islamophobic.
RELATED TOPICS