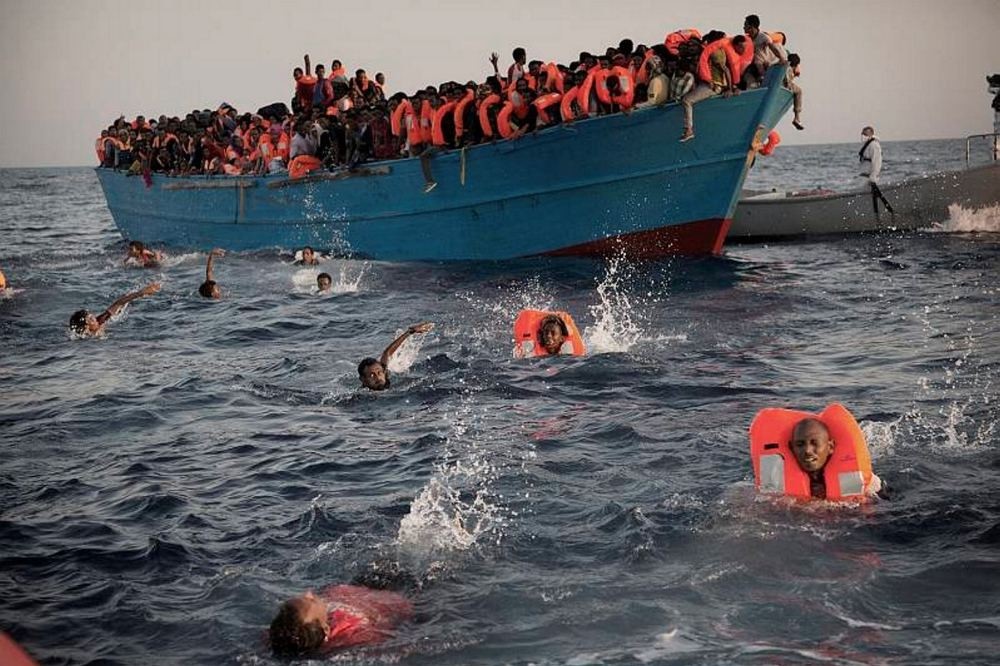 Migrants, most of them from Eritrea, jump into the water from a crowded wooden boat as they are helped by members of an NGO during a rescue operation at the Mediterranean sea, about 13 miles north of Sabratha, Libya, Aug. 29.
by Daily Sabah with Wires Sep 01, 2016 12:00 am

Since the European Union has failed to reach a common solution to the refugee crisis, Mediterranean Sea crossings continue to climb to an unprecedented level with more than 10,000 migrants rescued in the last 48 hours, revealing a humanitarian disaster

The number of people crossing the Mediterranean Sea has drastically risen, as about 3,000 migrants were picked up Tuesday from the central Mediterranean, the Italian coastguard said, raising to around 10,000 the rescue tally over the past 48 hours. There were 30 interventions carried out by Italian coastguard and navy vessels, the European Union's anti-migrant smuggling mission Eunavfor Med and the bloc's border agency Frontex, the Guardia Costiera said.

A day earlier, the coastguard coordinated 35 rescue missions, intercepting 44 dinghies, eight small wooden boats, one ship with 200 aboard and another carrying 704 people, the International Organization for Migration (IOM) told DPA news agency. The total number of rescued was 6,900.

"Nearly 7,000 people in a day is really quite a lot. If it's not a record, then it's close to it," said Flavio Di Giacomo, an IOM spokesman in Rome. Di Giacomo said two bodies were recovered, but the cause of death was not yet known. The remains were due to be taken Wednesday to the southern port of Brindisi, along with 720 survivors, the local mayor said, as quoted by the ANSA news agency.

The EU naval operation commanded from Rome aims primarily to protect European borders from the unprecedented influx of migrants attempting to reach the bloc's southern shores by paying smugglers to place them on overcrowded vessels and to prevent the loss of migrants' lives at sea. The operation was first launched in June 2015. The Italian navy and coastguard, and British, Irish and Norwegian vessels, as well as a ship run by the charity Doctors Without Borders (MSF), were involved in Monday's operations, IOM said.

A woman gave birth immediately after being rescued, the Guardia Costiera wrote on Twitter, while the navy, or Marina Militare, said another woman asked for her 3-month old girl to be baptized by the Catholic chaplain onboard. In a separate statement, MSF doctor Antonia Zemp said her organization's ship, Dignity I, picked up "twins who were premature babies delivered at eight months and were five days old."

They were moved along with their mother to a boat that could quickly take them onshore to Italy because "one of the boys was not well. He was vomiting, had hypothermia and was non-reactive," Zemp said. Prior to Monday's rescues, August had been a relatively slow month for sea migrant arrivals, with about 12,600 compared to 23,500 during August 2015, IOM data showed. "Abnormally windy" sea conditions may have kept some boats from leaving North Africa, Di Giacomo said.

Since border controls were tightened earlier this year along the so-called Balkan route, connecting Turkey to Austria, Italy has replaced Greece as the main entry point for Europe-bound migrants from Africa, the Middle East and beyond. The IOM calculated that 163,000 people arrived in Greece since the start of the year, compared with 234,000 in the same period of 2015. In Italy there were 111,500 arrivals since January 1, compared to 116,000 from January to August of last year, the Geneva-based body said. Tuesday's rescues are not counted in the estimates.
RELATED TOPICS