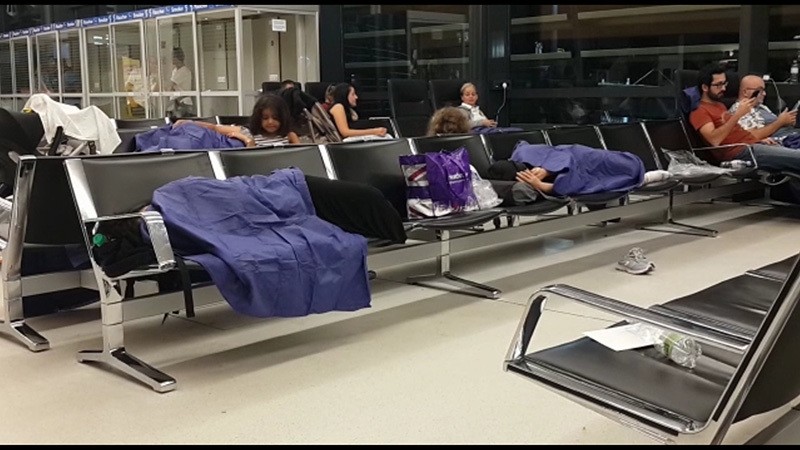 Nearly fifty passengers, mostly Turks, have been stuck in a visa limbo in Vienna owing to their lack of a Schengen visa.

The incident occurred after the British Airways Flight BA677 between Istanbul and London was forced to make an emergency landing due to a breakdown in Austrian capital Vienna on Friday.

British Airways, the owner of the plane, booked hotels for passengers to stay the night in the city, but 49 of the passengers were not allowed to leave the airport because they didn't have Schengen visas.

Authorities of the airway company booked hotels in the city for the 249 passengers but the Austrian police didn't allow 49 of them to stay in the hotels, forcing them to stay stuck in Vienna airport instead.

One of the passengers, Yusuf Sami Kamadan, a correspondent for Turkish state channel TRT, tweeted about the situation on the night. He described how, "We were treated against international law, I will sue the British Airways."

The passengers, among whom were children, old persons and patients, were given blankets and food.

The passengers stuck in the airport shared a video on social media. A woman with two children spoke on the video, saying "We made an emergency landing due to a breakdown. British Airways booked hotels for us. They did not let us enter their city because we are Turks. Now, they are also not giving me my luggage. All of my things are in there, and my child is hungry. All of the people here are victims because we are Turks. There is no more to say."

In a written statement, British Airways blamed Austria's immigration rules for Turkish passengers not being allowed to leave the airport. "As you know, our British Airways aircraft flight BA677, from Istanbul to London, had made, due to technical problems, an emergency landing at Vienna International Airport, on Thursday, September 1st 2016. All passengers and our cabin crew were disembarked safely, and we provided hotel accommodation for the majority of our customers, while according to Austrian immigration rules, some passengers were unable to enter the country, so we looked after them as best as we could overnight in the terminal. We have provided a new aircraft and crew, to take our customers to London today. We are sorry for the inconvenience. The safety of our customers and crew will be always our highest priority," the statement said.