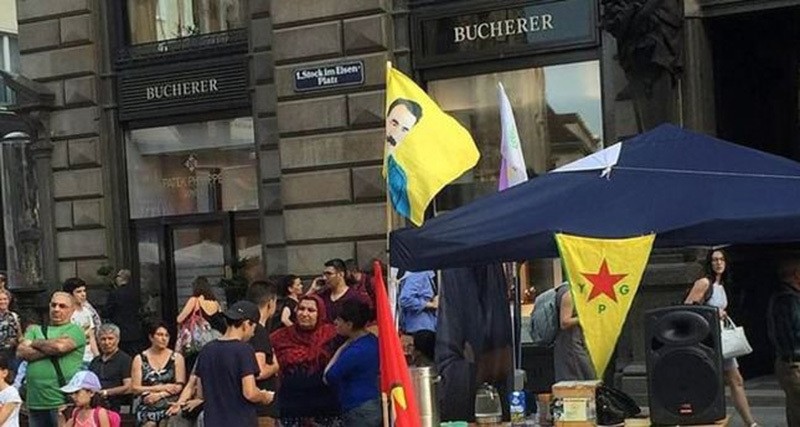 Vienna police have fined a taxi driver 710 euros over his reaction against PKK sympathizers in the street.

The Turkish taxi driver, Bilal Adalı, was fined 710 euros in the Austrian capital on July 28 by Austrian police after he reacted against pro-PKK people's anti-Turkey propaganda.

Sharing the photos of the punishment documents and the video of the incident on social media, Adalı told the leading Turkish state news agency, Anatolian Agency (AA), what happened on that day.

He described how, while he was driving a family to the city center, he saw a pro-PKK group in the street. Remembering a soldier killed by PKK militants in Turkey's southeastern province of Hakkari, he told the PKK-sympathizers "you terrorist craps, you are terrorists".

Following the incident, he described how nearly twenty police cars stopped near his taxi and forced him to leave the car. One of the police officers told him, "you can forget spending the rest of your life in Austria" According to Adalı, another officer said, "You're all the same, pro-Erdoğans,"

Binali Adalı said that "the police told me that you would take a great letter from us". The letter, showing that he was fined 710 euros, reached him last week.

Another offense listed claimed that he stopped traffic but he also denies this matter, outlining how it was the 20 police cars who forced traffic to a standstill.

He also denies another offense, which claims that he was using the left lane; according to Adalı "there is no left lane there".

Finally, stating that the fine is an injustice, Adalı said that he would soon be making a formal objection to the fine via his lawyer.

Born in Austria, Bilal Adalı has been working as a taxi driver in Vienna since 1988.