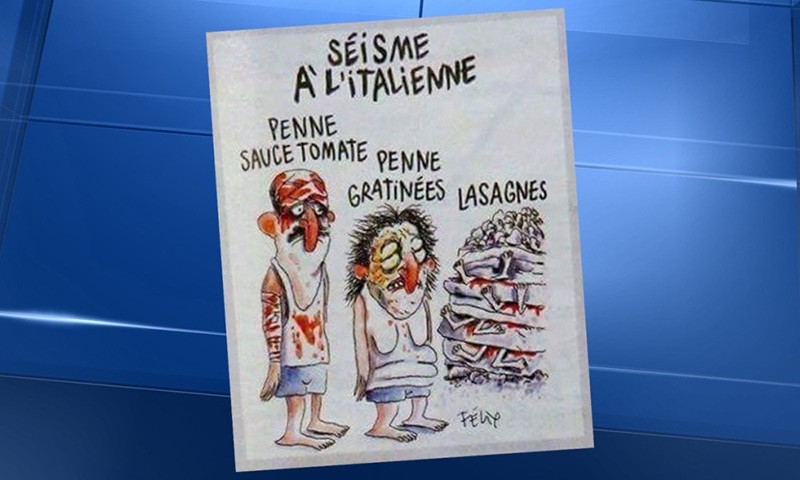 Controversial Charlie Hebdo cartoon which drew criticism from many in Italy. (DHA Photo)
by Compiled from Wire Services Sep 04, 2016 12:00 am

A Charlie Hebdo cartoon depicting victims of the Italian earthquake victims as lasagna has sparked outrage in the country which is still mourning the nearly 300 people who died in last week's tragedy.

In his response, Alfano recalled how Italy had stood behind Charlie after its headquarters were subjected to a deadly attack by Daesh terrorists in January 2015.

"Using their own satire, I'd offer a suggestion as to where they can stick their pencil," Alfano told journalists on the sidelines of the Ambrosetti Forum, a kind of Italian mini-Davos held this weekend in Cernobbio, on Lake Como.

"We cried over their dead, they mocked ours," Alfano added.

"I don't think its useful to comment further as I think that would produce precisely the sought after effect... that is to create a scandal," and draw attention to the cartoons, he added.

The drawings in the current edition of the French satirical weekly depict bloodied victims of the quake.

The words "penne tomato sauce" appear above a picture of a bloodied and bandaged man, while a woman with burns is described as "penne gratin."

To their right, a pile of bodies under layers of rubble is titled lasagna."

The quake struck central Italy on August 24, with the small town of Amatrice bearing the brunt.

The town is the home of the all'amatriciana pasta dish.

Italian Senate leader Pietro Grasso said that he respected "the freedom of satire and of irony," but added that "I am free to say that all this is disgusting."

Charlie Hebdo's offices in Paris were the scene of a deadly terrorist attack in January last year.

Daesh terrorists Said and Cherif Kouachi gunned down eight Charlie staff as well as several others in and around their building in the attack on the magazine whose drawings of Prophet Mohammed drew furious reactions from Muslims worldwide.

There was a wave of international sympathy for the magazine and its staff after that attack.

The French embassy in Rome issued a statement on the quake drawings Friday, saying that "the Charlie Hebdo cartoon in no way represents France's position".