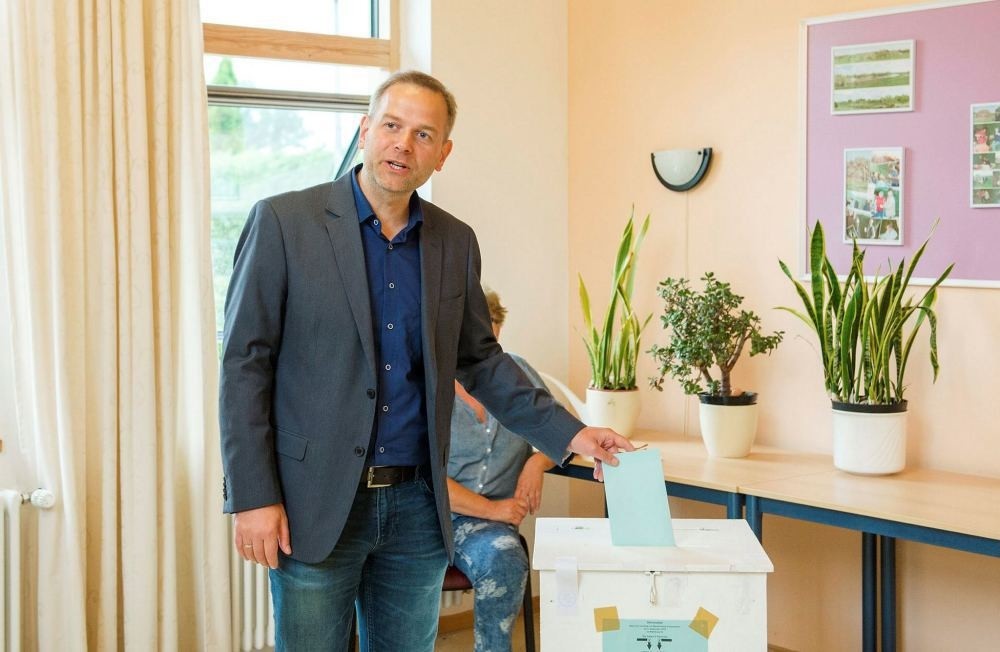 The leading candidate of the party Alternative for Germany (AfD), Leif-Erik Holm, casts his ballot.
by Sep 05, 2016 12:00 am
Voting began on Sunday in the German state of Mecklenburg-Vorpommern, where polls show the anti-immigrant Alternative for Germany (AfD) party making huge gains amid growing discontent with Chancellor Angela Merkel and her open-door refugee policy. The election, taking place exactly a year after Merkel's decision to open Germany's borders to hundreds of thousands of refugees, will be followed by another key vote in Berlin in two weeks and national elections next September. Voters already punished Merkel in three state elections in March, voting in droves for the AfD and rejecting Merkel's Christian Democrats. Mecklenburg-Vorpommern is a small coastal state in northeastern Germany with just 1.3 million eligible voters, but losses there would be humiliating for Merkel, who has her own electoral district in the state.

Founded two years after the last election in the state in 2011, the AfD is expected to capture 22 percent of the vote, the same as Merkel's Christian Democratic Union (CDU), junior partner in the state's ruling coalition, according to a poll by broadcaster ZDF. "I'm hoping for a result in the 20s, but perhaps we'll even make it to become the strongest party," Leif-Erik Holm, the AfD's top candidate in the state, told Reuters. State Premier Erwin Sellering, a Social Democrat, urged voters to reject the AfD. "These are the people who don't want to participate. They're all about frustration and protest," he told Reuters TV. Any result over 5 percent would give the AfD seats in the state parliament, upping its presence in state governments across the country to nine of 16 states. However, it has no chance of governing in the state since the other parties have said they would not form a coalition with the party.

The Social Democrats, senior partners in the state's ruling coalition, are expected to win 28 percent of the vote, compared with 35.6 percent in the last state-wide election in 2011. The AfD is also making gains nationwide, a new poll showed Sunday. If the national election were held next week, The AfD would win 12 percent of the vote, making it the third-largest party in Germany, according to a poll conducted by the Emnid institute for the Bild newspaper and published on Sunday. That would catapult the party into the German parliament for the first time since its creation in 2013. Merkel, mulling a bid for a fourth term as chancellor, made a last-minute campaign appearance on Saturday in Mecklenburg-Vorpommern, warning against the politics of "angst" offered by AfD with its virulent anti-refugee stance. "There are people who are good at provoking, but that doesn't do anything for the state," she told the rally, urging voters to look beyond divisive campaign slogans and consider the policies of the current coalition that had halved unemployment and pumped up tourism in the northeastern coastal state. In an interview in the mass-circulation Bild newspaper, Merkel defended her decision to welcome so many migrants fleeing conflict in the Middle East, and denied the influx had cut funding for the German public. Merkel's approval ratings have sunk to a five-year low of 45 percent over the past year, but the chancellor said she would act no differently if faced with the same situation today.

Interior Minister Thomas de Maiziere, a fellow Christian Democrat, rejected as "preposterous" criticism from some in the CDU's Christian Social Union (CSU) sister party that Merkel's refugee policy was responsible for the rise of the AfD party. The Emnid poll said 63 percent of Germans believed that too. "The refugee crisis is not the reason that far-right populist parties are now making gains here. That has more to do with the anxiety that some have about globalization and modernity," he told the Welt am Sonntag newspaper. But Family Minister Manuela Schwesig, a Social Democrat who lives in Mecklenburg-Vorpommern, said discord among conservatives was strengthening the hand of far-right populists. "The German government needs a unified position on refugees," she told the Bild am Sonntag. "The Christian Democrats should not be running after AfD positions."