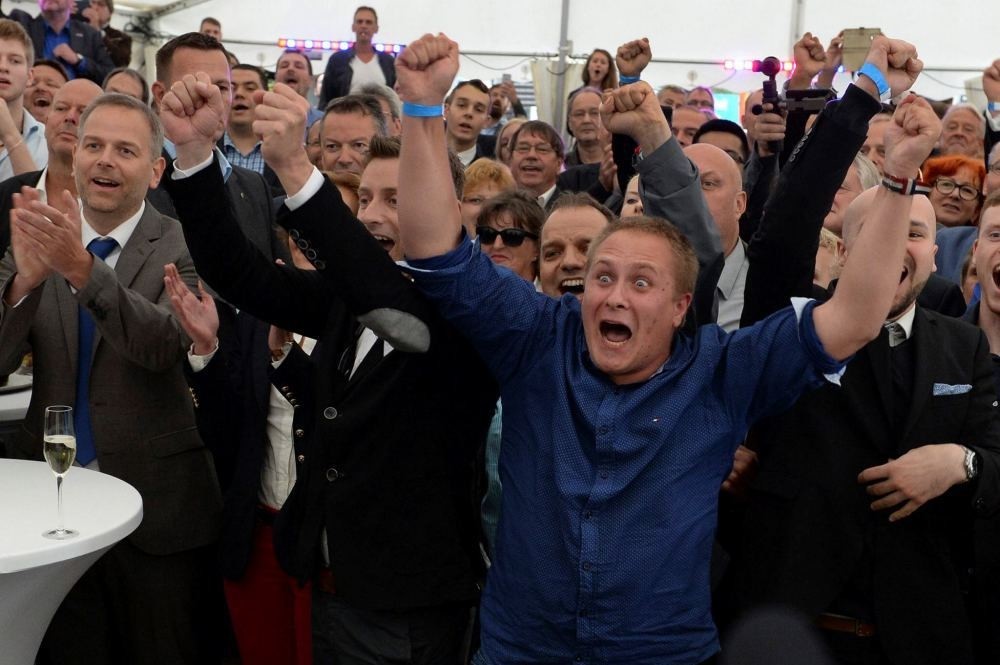 Members and supporters of the AfD party reacted after first exit polls in Schwerin, Germany, Sept. 4 after the state elections in Mecklenburg-Western Pomerania.
by Compiled from Wire Services Sep 06, 2016 12:00 am

With Chancellor Merkel's Party being trounced by the far-right, anti-immigrant AfD, Merkel's national popularity plummets after public outcry against her open-door policy

German Chancellor Angela Merkel came under fresh fire over her pro-immigration policy stance on Monday after her party suffered a humiliating defeat against an upstart anti-migrant populist party in her home state. Merkel's "Open Door" policy has been in trouble as the German government needs to unload hundreds of thousands in order to maintain control in Berlin. German Interior Minister Thomas de Maiziere noted that the idea of sending migrants back to Greece needed to be processed, referring to the Dublin regulations.

Merkel's conservative Bavarian allies the CSU renewed their demands for tougher policies on migrants. The outcome was "a protest against the policies in Berlin", said its secretary general Andreas Scheuer, renewing calls for an upper limit to the refugee intake. The CDU's general secretary Peter Tauber acknowledged that Sunday's results were "bitter", acknowledging that voters "wanted to send a signal of protest".

With her eyes on national elections next year, AfD party co-chief Beatrix von Storch hailed the shock outcome as "the beginning of the end of the Merkel era", while Bild daily labelled the result another "slap across the face" for the chancellor. With its latest win, the Islamophobic AfD, founded just over three years ago, is now represented in nine out of Germany's 16 regional parliaments, and hoping for more gains when the capital Berlin goes to the polls in two weeks. Its eurosceptic, anti-migrant message has propelled it into third place in national opinion polls, and it is likely to enter the Bundestag parliament after a general election next year.

The AfD has capitalized on widespread discontent about the arrival of 1.1 million migrants in 2015, which it argues resulted from Merkel's promise of sanctuary to Syrian refugees. The right-wing populist Alternative for Germany (AfD) party clinched almost 21 percent in its first bid for seats in the regional parliament of Mecklenburg-Western Pomerania on Sunday. Merkel's conservative Christian Democratic Union (CDU) won just 19 percent in its worst ever score in the ex-communist northeastern state, while the Social Democrats maintained top place with over 30 percent.

The AfD's rise mirrors success enjoyed by other anti-immigration parties across Europe, with France's Front National (FN) riding high in the polls and a far-right populist eyeing the presidency in Austria in elections on October 2. The leaders of right-wing parties in Italy and France applauded the AfD's electoral success. "What was not possible yesterday has become possible: the patriots of the AfD have swept away Mrs Merkel's party," Marine Le Pen of the right-wing Front National tweeted late Sunday. "Fantastic vote in Germany: a big slap for Merkel in her region and a triumph for Alternative for Germany, allied with the [Northern] League and Le Pen," Matteo Salvini, leader of the far-right Northern League, said on Facebook.

The state vote was held exactly one year after Merkel opened German borders to a mass influx of Syrian refugees and other migrants that would swell arrivals in Europe's top economy to one million asylum seekers in 2015. While her welcoming stance initially won much praise, the mood has since considerably darkened as popular worries have grown about how to integrate the newcomers. The AfD has capitalized on such fears, especially since a spate of sexual assaults blamed on North African men on New Year's Eve, and a series of bloody attacks this summer.The state election in the sprawling farming and coastal state is the latest to serve as a bellwether ahead of national elections in late 2017. Merkel, in power for 11 years, has not yet said whether she will run for a fourth term but is widely expected to do so. Although Sunday's election was held in Germany's poorest and least populous state, the outcome was significant in part because it is home to Merkel's constituency, the port city of Stralsund.

Meanwhile, a senior ally of German Chancellor Angela Merkel on Monday defended her course in the refugee crisis after her Christian Democrats (CDU) fell behind the right-wing Alternative for Germany (AfD) in an election in her home state. "… local issues were displaced by the national debate about refugee policies," the party's general secretary Peter Tauber said. Tauber noted that Merkel's government had already introduced a series of measures to reduce the refugee influx, integrate the 1.1 million migrants that arrived in 2015 and improve security in the country. "It takes time for the measures to work and to win back the trust that has been lost," he said during a press conference. "This was more than a small state election, it was a vote on Merkel," said news site Spiegel Online, pointing at the "protest storm" in "Merkel's living room."

After the AfD party replaced Merkel's Christian Democrats the second-strongest party in the Mecklenburg-Vorpommern election, a prominent member of the country's Jewish community said Monday that the rise of the right-wing party in Germany as "nightmare." "The fact that a right-wing extremist party that agitates and mobilizes against minorities in a disgustingly blunt manner can rise in such an unbridled way is a nightmare come true," said Charlotte Knobloch, the former head of the Central Council of Jews in Germany.

The AfD was founded in 2013 as a eurosceptic party that advocated a return to the Deutschmark, but it has since shifted to become a mainly anti-immigration and Islamophobic party. It has grown strongly even as its top members have sparked outrage with insulting remarks, including one disparaging star footballer Jerome Boateng, of mixed German and Ghanaian descent. The right-wing populist party is the first to establish itself in the German political landscape since World War II, after decades in which no such party crossed the five percent hurdle to enter national parliament. At national level, it is now polling at 14 percent according to a September survey, a gain of 10 points in the year since Merkel threw open German borders to a mass influx of asylum seekers.
Last Update: Sep 06, 2016 10:45 am
RELATED TOPICS