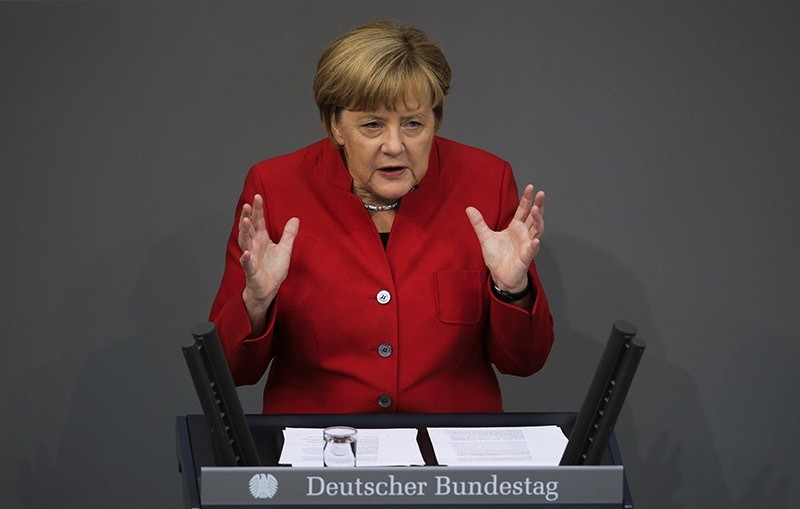 German Chancellor Angela Merkel delivers her speech during the budget 2017 debate at the German parliament Bundestag (AP Photo)
by Daily Sabah with DPA Sep 07, 2016 12:00 am

German Chancellor Angela Merkel defended the EU's refugee deal with Ankara in an address to the German Bundestag Wednesday, saying the deal has led to a significant reduction in migrant deaths in the Aegean Sea, adding that this should be a "model for similar deals" with countries including Egypt, Libya and Tunisia.

During her speech, the German chancellor also defended her refugee policies saying, "The situation today is a thousand times better than it was a year ago."

Merkel whose Christian Democratic Union (CDU) faced substantial electoral losses in her home state of Mecklenburg-Vorpommern in northern Germany to right-wing Alternative for Germany (AfD) due to her controversial decision to keep Germany's borders open to refugees just three days before, said that "Of course, there is a lot left to do."

The chancellor said that her government has introduced measures to integrate refugees into society and to improve security in the country, acknowledging that the Bundestag still needs to improve the mechanisms in place for sending back refugees who fail to gain asylum, saying, "We need to tell them [refugees] to leave or we cannot manage the job of integration [effectively]."

The EU and Turkey reached an agreement in March to reduce the worst migration crisis that Europe has seen since World War II with EU countries tightening security checks of the migration flow and sending refugees who arrive in Greece back to Turkey in exchange for refugees who have legally been processed. In return, Turkey was supposed to receive benefits including visa-free travel for its citizens to the EU's Schengen zone, which according to the agreement was expected in June 2016 along with 6 billion euros to be spent on the humanitarian needs of Syrian refugees until 2018.

However, the deal was hampered by the EU's persistent request that Turkey alter its counterterrorism laws and narrow its definition of terrorism, a request which Turkish officials have denounced saying they will make no changes as long as Turkey is facing active threats from terrorist organizations DAESH and the PKK along with the PKK's Syrian offshoot the Democratic Union Party (PYD).

Turkey has taken in at least 2.7 million Syrian refugees and houses 270,000 in 26 temporary refugee camps with food, health and education services as well as psychological support, vocational training and social activities.

Over the past year, hundreds of thousands of refugees have crossed the Aegean Sea to reach Greece, placing a huge strain on the austerity-hit EU member and threatening the EU's internal open-border system, as countries to the north of Greece impose border restrictions.

At the height of Europe's refugee crisis last year, thousands of asylum seekers landed every day on the Greek islands off the Turkish coast.

Arrival numbers have plunged following the EU-Turkey deal. In all, some 57,000 migrants have been blocked from entry to Greece since the closure of neighboring European borders in March. Some 9,600 of them are left stranded on the Greek islands.