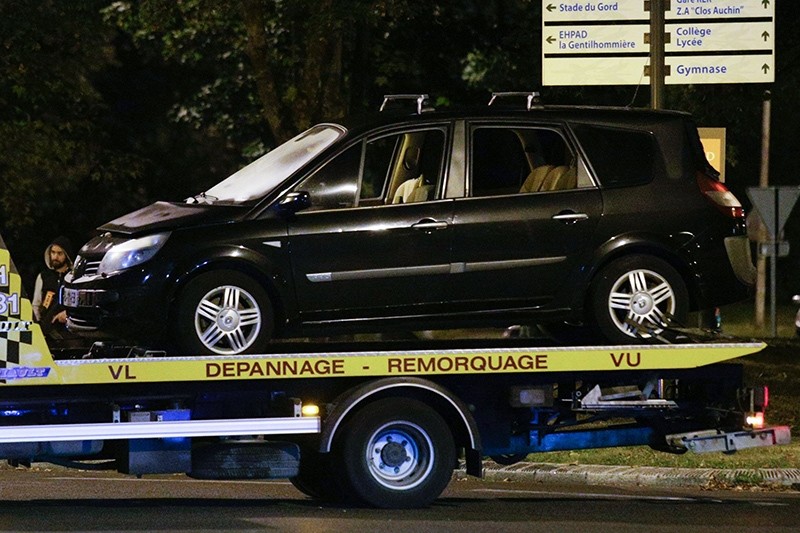 A vehicle allegedly belonging to one of the arrested woman is moved by a wrecker in Boussy-Saint-Antoine south of Paris on September 8, 2016 (AFP Photo)
by Sep 09, 2016 12:00 am

French police investigating a car containing six gas cylinders in Paris have arrested three female suspects said to have been planning fresh attacks, shooting one of them in the process, who had sworn allegiance to Daesh terrorists, a source close to the investigation said Friday.

Police shot and arrested the 19-year-old woman with two accomplices south of Paris late Thursday. She is the daughter of the car's owner.

A police officer also suffered a knife wound during the arrest late Thursday of the three women -- aged 39, 23 and 19 -- who were preparing "new violent ... and imminent actions", according to Interior Minister Bernard Cazeneuve.

The city's prosecutor later confirmed that the women behind the foiled attack in Paris were guided by Daesh from Syria.

"The terrorist organisation uses not only women, but young women, who get to know them and develop their plot from a distance," Francois Molins told a news conference.

One of the women arrested was linked to the extremist killers in June and July of a police couple and a priest, France's anti-terrorism prosecutor said.

She was the girlfriend of Larossi Abballa, who killed the police couple at their Paris suburb home in June before himself being shot dead, and then that of Adel Kermiche, who slit the throat of an elderly priest in July and was also killed by police, Francois Molins told a news conference.

A local resident who saw the women just before their arrest in Boussy-Saint-Antoine, south of Paris, said they "seemed anxious, looking around them all the time".

When confronted, "one young women pulled out a knife and stabbed a police officer at stomach level", Joachim Fortes Sanchez, 21, told AFP. "It all happened very fast".

Four people -- two brothers and their girlfriends -- were already in custody over the car, found just a few hundred meters (feet) from the Notre Dame cathedral in central Paris, an area always thronged with tourists.

The first couple arrested, a 34-year-old man and a 29-year-old woman, have been held since Tuesday and are known to the security services for links to terrorists.

Police arrested the man's brother and his girlfriend, both aged 26, late Wednesday.

Authorities had said earlier they were searching for the two daughters of the owner of the grey Peugeot 607 abandoned on Sunday near Notre Dame, which draws millions of visitors every year.

A bar employee working near Notre Dame had first raised the alert on Sunday after noticing a gas cylinder on the back seat of the parked car, police said.

The car had no number plates and its hazard lights were flashing.

Although the cylinder on the back seat was empty, five full cylinders were discovered in the boot.

Three bottles of diesel fuel were also discovered in the vehicle, but police found no detonators.

"If it was an attack plot, the method was very strange," a police source said Thursday.

France is on high alert following a string of terrorist attacks, including last November's coordinated bloodshed in which Daesh terrorists killed 130 people.

Speaking on Thursday, President Francois Hollande referred to attack plots that have been foiled "in recent days", without elaborating.

Cazeneuve on Friday told French daily La Presse that 260 people have been arrested in connection with terrorist networks or operations since the beginning of the year.

Photographs of the car after it was discovered showed its boot open and the gas cylinders placed on the ground in a quiet side street opposite the cathedral.

The discovery followed a deadly summer in France in which 86 people were killed when a truck ploughed into a Bastille Day crowd in the southern resort of Nice.

Daesh said the truck was driven by one of its followers.

In May, the head of France's DGSI domestic intelligence service, Patrick Calvar, warned of a "new form of attack" in which explosive devices would be left near sites that attract large crowds.

French security services are particularly worried about the danger posed by extremists returning from Syria after fighting with Daesh forces.